What exactly changed in Age of Sigmar’s second edition?

Overview of the changes in Age of Sigmar 2

In this article, I will go through the exact changes in Age of Sigmar’s second edition (AoS 2.0). The core rules can be found on the Official AoS page here.

The Age of Sigmar second edition brings a lot of welcome changes to the system. Overall the following is new:

Changes to the core rules in AoS 2

The core rules have been expanded from the 4 pages it was before to 17 (ish) pages.

A lot of the extra stuff is rules that before was scattered in different books (how does allegiance abilities work, how do allies work, how do battalions work and so on).

The addition and tweaks of the rules are massive because it makes it much easier for new players to locate all the rules they need. The new core rules are, like the old ones, available as a free download in the app and on the new official AoS website.

Here is a comprehensive rundown of the core rule changes in AoS 2:

Command Abilities for everyone!:

The random terrain effects have been adjusted. There are still 6 different results and they still have the same name.

Actual battleplans have finally been added to the core rules. Page 11 will explain what they are and how you should use them.

The only battleplan included in the core rules is “First Blood”.

The map is standard setup and the special rule is that you get 1 command point for being the first to kill a general.

The objective is to either table you opponent or kill the most amount of wounds at the end of the 5 battle round.

The battleplan is good for getting a quick game going but it is really bad at showing how tactical AoS can be. This battleplan will quickly end in brawl in the middle of the table if booth players are new to the game.

Earlier was possible to have a game in a specific “realm”. You could find the rules for these in the different campaign books. Now, these rules are explained in the core rules on page 16.

It is important to note that it is stated that “you may” pick a realm to have the battle in. The actual rules for the realms are not located in the core rules, but the rules do state which of the mortal realms there is to choose from. The realm picked will have several different effects.

All in all, it is unlikely that very competitive tournaments will include the rules for battling in a specific realm. Because of the very random nature of the rules, they are mainly aimed at narrative and casual play.

Finally, the rules for Allegiance Abilities are found in the core rules (earlier they were in the Generals Handbook or in the Battletome with your allegiance abilities).

This is a very welcome change, as it makes the “normal” game much better and eases the information overload for new players.

Anything that can collect the rules in a more central (and free) place is a good move in my opinion.

In the new Generals Handbook, you will find allegiance abilities and big warscroll battalions for the same factions as in the last edition of the GBH (bummer…).

Some of the abilities are tweaked but nothing major has happened.

The big tweak is that the allegiance abilities for the four grand alliances are not included in the GBH, but is now part of the Big Core Rulebook.

As per usual, the new Generals Handbook brings a slew of point adjustments, both up and down.

The points adjustment seems in line with the amount in earlier handbooks, but it feels like the changes did not live up to the hype created by the Warhammer community articles (MASSIVE POINTS CHANGES were advertised for some armies and the handbook did not deliver).

Sadly, it seems that none of the factions without a battletome have become more competitive with the points changes (and this seemed like one of the quick solutions to that problem ).

Summoning has been completely reworked. Summoning a unit now no longer cost points!

You will find the rules for summoning for Khorne, Tzeentch, Everchosen, Chaos, Seraphon and Sylvaneth on page 98 to 101 of GHB18. Warscrolls of been reworked to reflect the changes in summoning.

Note that the changes regarding no point cost for summoned units also affect units abilities that can summon (new Colossal Squig as an example) and battalions that have a summoning effect.

Most of the GW terrain already had warscrolls in the app and on the webpage, but these are now tweaked and included in the GHB.

Most of the rules only state that a particular piece of terrain always follows a specific terrain rule (deadly or mystical as an example), but some have completely new rules.

The most striking example is the citadel wood that now blocks line of sight. As per the newest FAQ, this includes the Sylvaneth Wildwood!

What new products launched with AoS 2.0?

What is included in the new Big Core Rulebook (BCR)

The new core rulebook is an attempt to make the AoS setting and lore easier to grasp and understand.

Much if the lore information included is “known” already, but it has been scattered in different novels, battletomes and campaign books. With this focus of the BCR, it is no surprise we do not see many changes to rules in here.

What is included in the Malign Sorcery expansion?

Malign Sorcery is one of the biggest new enchantments to AoS.

To be honest, the softback book is a rather bad purchase without the spells.

Are the old books legal? 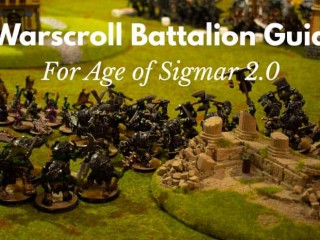 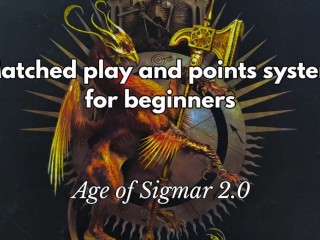