Note: a new Battletome called Orruk Warclans contains the Bonesplitterz and the Ironjawz. This means that a lot of the tactics in this guide is outdated.

I hope to do an updated guide on the Orruk Warclans, but time will tell if this will be possible.

This is an overall information article about the Destruction Faction the Bonesplitterz.

It will cover the following topics:

A note on the artwork

In this article, I have used the amazing artwork from the faction battletome. I have done this to convey the right aesthetic and feel of the army. All rights for the images are reserved by Games Workshop and the very talented artists that have made them (and I hope they will not get pissed by me displaying the army artwork here).

The Bonesplitterz army is made up of (almost) naked wild Orruks. Some are mounted on big pigs, while others darken the sky with as many arrows as possible. No matter how they kill you, it will be savage. The leader of the Bonesplitterz is the Shamans, unleashing the power of the Waaagh! on their enemies.

If you like tribal stuff, savage dudes, lots of green skin, killing monsters, attacking multiple times and rolling a crap ton of attack dice – the Bonezplitters might be for you!

The battletome for Bonesplitterz was released with artefacts, command traits, unique spell lore and battalions. While the Bonesplitterz does not have an amazing amount of different units, they have enough to make them worth your while.

How is the lore and theme for the Bonesplitterz

Miniatures and units available for The Bonesplitterz

You can find all of the kits for the Bonesplitterz here (affiliate link to the store I recommend for your country).

If you want to play Bonesplitterz, you have to get real familiar with the Savage Orruk box 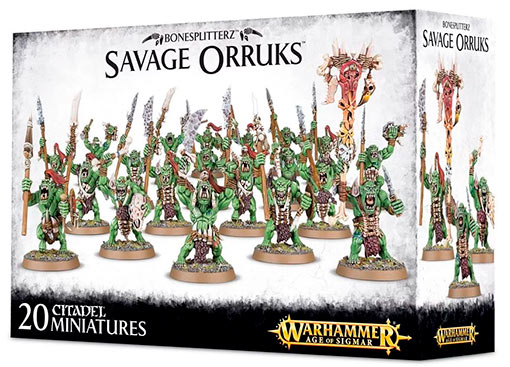 This bad boy will form the backbone of your army, so it is suitable to start here. This box20 Savage Orruk on foot in it. They can be assembled as the warscroll for:

You can also decide to assemble two of the Orruks as a “Big Stabba”. The bighas its own warscroll, but it is only from this box you can get it (unless you convert something up). Theare good, so I wouldyou always make the maximum amount.

The second (and final) plastic kit is the Savage Boarboys. 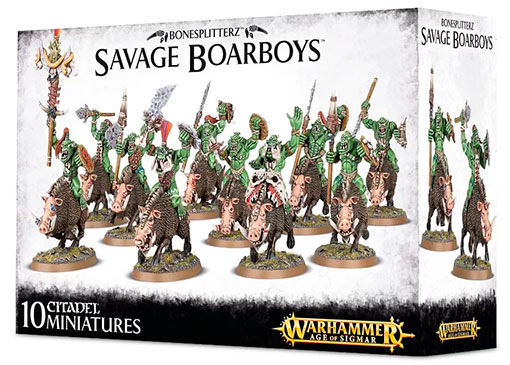 From thisyou will get 10 orruks mounted in big. These can be either:

Booth options contain double the minimum size you need for a unit in matched play.

That is all you get with regards to unit choices.

All the wizards are(anddirect only).

Quality of the models:

In general, the sculpt of the models is quite good, at least compared to their age (they are getting old). At some point, you will get very tired of painting, what is, the same body over and over again. The horde style of the Savage Orruks can look socool on the table. Because of the way the sculpts are made, they are quite easy to kitbash and convert – so at least there is an easy way of making them look somewhat unique.

Quality of the rules for the models:

All of the units have at least one style ofwhere they are have a role to play.

The mounted Orruks have an army where they are quite cool, but for the most part, you should be buying a lot of Savage Orruk boxes to start off with.

Any start collecting or box sets available for Bonesplitterz?

No, there is no Start collecting box for you. That said, you can actually build an army from just the plastic box of Orruks – so it is not that bad (I will cover this in the price section).

Not yet. The Bonesplitterz battletome predates this newfangled madness, but damn they could get some cool endless spells when they get updated.of Gork stomping around on the table would be madly funny!

How does the Allegiance Abilities work for the Bonesplitterz

Warpaint: a save roll with a six on the dice is always a success, no matter theof your opponent. If the wound is a mortal wound, the magic warpaint will also save that on a roll of six.

With the exception of a few heroes, your army has a 6+ save. So basically, you just always save on a six with this army.

If one of your units kills a monster, they no longer need to take battleshock tests.

When you select a unit to fight that is within 3″ of a monster you roll a d6 and they gain a buff for the phase:

The allegiance buffs are so and so. The armour buff helps to make your army just a bit more durable (and they really need that). The monster hunter stuff can be very good in some games, but in other games, it will do nothing.

At the end of the day, I guess you pick the allegiance so you get Bonesplitter units as battleline and because the spells and some of the artefacts are good (and mono factions are just the best).

How is the lore of the Savage Waagh!?

I find it quite amazing really. I think this is the biggest selling point of the army: loads of savage orcs getting pumped up and enhanced by their shamans. The theme is just so damn good.

Thankfully, the spells fit this narrative.

A rundown on some of the Bonesplitters Battalions

The Bonesplitterz have some very awesome battalions, worth building around both from a theme and power perspective:

Cool combos and competitive builds for the Bonesplitterz

The cool combos are also some of the strongest builds the Bonesplitterz can muster.

Some people will argue that you can stack the command ability of the Big Boss (so you more than one extra attacks for each 6 you roll to hit), but I have my doubts to whether or not it actually works that way. At least, that is now how I would play it.

You can read a great rundown on this type of list over at the Honestwargamer (rundown by Peter Atkinson).

If you do not like shooting Orruks (I know I have a bit of problem with them), you could also make this a melee build (and Big Stabbas).

Not really a combo, but just a style of army.

I find this type build reallybecause it is the essence of what I think Bonesplitterz should be: loads of Orruks getting frenzied by their shamans.

This build is quite simple and is a bit of an alpha-strike one trick pony.

What books will I need to play Bonesplitterz

In order to play Bonesplitterz, you will need the Bonesplitterz Battletome. The spells, the artefacts, the allegiance traits and everything else is what makes this army great – and they are all in that book.

Only very minor things have been changed according to their Errata, so not much has changed in the book. The updated points will be in the newest Generals Handbook, but you could also just look the points up on the Warscroll builder or Azyr.

The Artefacts in Malign Sorcery are not that helpful for you. You got some strong artefacts for you wizard in the battletome, and because of your weak combat heroes, you cannot leverage the strong artefacts in that book. On the other hand, you have access to + to cast on your wizards and the ability to get all spells of on a roll of a double. This means that some of the endless spells could be a real boon to your army if you go magic heavy.

Bonesplitterz battletome is surprisingly good. All of the spells, artefacts, allegiance traits and abilitiesan army that has very few model options and makes them playable. Granted, the Bonesplitterz is in no way top of the tier list – but that is mainly the warscrolls and the points holding them back.

GW pumping out Battletomes fast and furious right now, but we have not yet seen if battletomes made after the Sylvaneth (so tomes with spells and everything) are going to get updated this year. Time will tell if Bonesplitterz gets an update to the book together with endless spells and terrain. I doubt any more than that would be in the cards for the savage green dudes.

What is the cost of buying a Bonesplitterz army

Start Collecting box makes them a slightly expensive army. You can kitbash a lot of your characters, so you might be able to make some savings there.

It is very possible to buy a lot of Bonesplitterz on the second-hand market. I have bought non-painted Bonesplitterz from old fantasy players (who had them from Orcs and Goblins and was looking to get rid them).

What I would do if I wanted to start the Bonesplitterz semi cheap:

With that setup, you have something like 1400 points. Now you need a box of something else to fill one more battleline. Maybe some pigs to give you a bit of movement. You have what is required for the Kop Rukk and the Drakfoot Warclan battalion (if you do 1 Prophet and 3), so some endless spells to utilize your magic strength would be good.

What are the Allies available for the Bonesplitterz

You got plenty of wizards and cheap bodies in your army, but you do lack a bit of punch. It is rare to see Bonesplitterz ally in a lot of things. With all the buffs connected to the Bonesplitters keyword, bringing in stuff that cannot synergise with that is a bit of a waste. That said, there are some good things you could ally in:

Overall verdict on the Bonesplitterz

It is quite amazing how fresh and viable the Bonezplitterz feel. Their unit choices are limited, their battletome is old, the miniatures are not that dynamic in their poses. In spite of all this, they are still alive and kicking!

Their battalions, spells, combos and efficient wounds are keeping them afloat. It will be great to see what GW does with an updated battletome.

For now, you have to know what you are getting yourself into with the Savage Orruks.

You have to love their aesthetic, their theme, their models and the overall feeling the Bonesplitterz have. That love needs to overcome the army’s limitations. If it does not, you will get frustrated by their lack of power and the limited choices you have. If it does, you will be rewarded with a very cool, savage, rock and roll army.

Support us on Patreon

You can find our Patreon here