Hammerhal is a great city located on two sides of a Realmgate: One part of the city, Hammerhal Aqsha, lies in Aqshy, the Realm of Fire, and from here fiery hot magma flows into Hammerhal Ghyra in the Realm of Life too keep the surrounding plant life there from consuming the city. If the Mortals of Order have a capital city, it is probably Hammerhal, and the city is home to nearly all mortal cultures that pledge allegiance to Sigmar.

Hammerhalians are traders and warriors, always expanding their city and fighting to defend it from the enemies that surround it. In battle, they are famous for their pride and bravery, and the city is home to famous regiments such as the Freeguild Goldjackets. Even though the citizens are mere mortals in a dangerous world of towering monsters and mystical horrors, they fearless meet their enemies in hand to hand combat, standing their ground against all odds.

In the game, this means they are a close combat-oriented warband which excels at holding objectives, and they get stronger when they fight close to each other, inspired by the bravery of their leaders and comrades.

If you think fighting on against insurmountable odds sounds like a tale worth living, the Cities of Sigmar Shieldbands Hammerhal warband might be the right choice for you.

Like all other Cities of Sigmar Shieldbands warbands, Hammerhal has access to four unique abilities, as well as six abilities shared with the rest of the Shieldbands:

Which Fighters are best for a Hammerhal Warband?

Hammerhal is home to all kinds of cultures, so narratively you’re free to choose whichever combination of fighters you like. If anything is specific to Hammerhal, it is mostly the Freeguild fighters, especially Freeguild Guard, which could represent the famous Hammerhalian Goldjackets or another regiment of your own making. The Freeguild fighters also embody the concept of being stronger together, as they are designed as rank and file infantry, and are cheap enough in points for you to field a big group of them.

Since you want to be able to take advantage of the Triple Leader ability For Sigmar and for Hammerhal! to improve the Attacks of melee attack actions of a group of your fighters, you need a Leader who can take down enemy fighters to trigger that ability. For this the Guild Champion is a good, affordable choice from within the Freeguild ranks.

As a Hero, you should consider taking a Battlemage or a Handmaiden of the Thorn to be able to use the damage-dealing Quad Leader ability Twin-Tailed Comet. Both would fit the city’s visual style, as the Battlemage can look very much like a fire wizard and the Handmaiden would fit in the Realm of Life.

If you’re mainly looking for the right combination of fighters to take advantage of Hammerhal’s abilities, you could swap the Freeguild Guard with Black Ark Corsairs with Vicious Blade and Wicked Cutlass, which have less Range but more Attacks at the same points cost as the Guard with Spear, and the Freeguild Greatsword can be swapped with Hammerers for higher critical damage or Wildwood Rangers for faster movement.

This is just the core of your warband, of course, and you can use the shared abilities of the Cities to branch out into ranged warfare with Handgunners or Crossbowmen to take advantage of Volley of Shots or grab objectives quickly with mounted fighters. Just remember to pick melee cavalry such as Wild Riders who can benefit from Hammerhal’s abilities, which tend to favor attack actions with a Range of 3 or less.

Tactics for the Hammerhal Warband

With Hammerhal, you always want to field a strong melee Leader or Hero in a battle group with as many melee fighters on as small bases as possible, so the greatest number of Attacks can be gained from the use of the For Sigmar and for Hammerhal! ability.

Fielding a strong melee fighter in the same battle group as another strong melee fighter is also great for the Quad ability Righteous Purpose, which is more likely to see use than many other Quads because the value of the dice roll for the ability doesn’t impact the power of the ability. Having two strong fighters get bonus attack actions right next to each other is a good way of getting rid of a key enemy target.

Other than that, consider how you’re going to outweigh the weaknesses of such a melee infantry-focused army. Sure, you can boost Attacks with Reclaim for Sigmar when you’re close to objectives, but will your big blob of infantry get there in time to stop the enemy from holding that objective? Switching from Freeguild fighters to high Move infantry such as Scourge Privateer or Wanderer fighter types might be worth it. You could also go for ranged units, but since you aren’t specialized in boosting their attack actions, I would rather just save up a Wild Dice for a devastating Twin-Tailed Comet takedown by your Mystic Hero or Leader.

Here’s an example of a warband that’s built around the special abilities of the Hammerhal warband:

With the Leader in a battlegroup with the Freeguild Guard with Spears, you can get a lot of Range 2 Attacks on a group of enemy targets if you can kill something with your Guild Champion first. The 2 Freeguild Greatswords should stick together and go for another target (or assault an objective with Reclaim for Sigmar), and the Battlemage just needs to go to a high point where he can see everything and stay away from enemies until he can use Twin-Tailed Comet.

Colors of the Hammerhal Warband

The colors of Hammerhal are gold, blue and white, just like the Hammers of Sigmar Stormcast Eternals you’ll see on Age of Sigmar starter sets and promotion material. It can be very easy to paint, as you can see in this video from Warhammer TV. 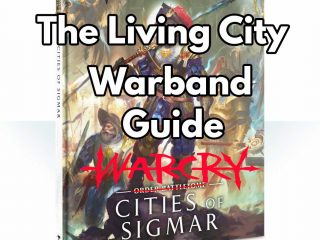