Tempest’s Eye is a mountaintop city located in the Realm of Fire. The life of the city is oriented towards the sky, with observatories and airships to be seen everywhere, but many of its military operations are carried out on the steppes at the foot of the mountain, where Outriders and other fast Freeguild units scout out foes that the flying squadrons of the Stormcast Eternals and Kharadron Overlords can target with precision strikes.

In battle, a Tempest’s Eye warband embody the icy winds of the mountaintops they call home: no other Free City among the Shieldbands can cover ground as quickly as the cavalry of Tempest’s Eye, and even slower fighters become swift as the wind under the leadership of their steppe-trained officers. Finally, a Tempest’s Eye spellcaster can call upon the eagles from the peaks of the Titanspear Mountain to strike an unsuspecting enemy anywhere on the battlefield.

If you like using cavalry in your games of Warcry, or if you like always being able to outmaneuver your enemies, Tempest’s Eye might be just the warband for you.

Abilities for the Tempest’s Eye Warband

Like all other Cities of Sigmar Shieldbands warbands, The Living City has access to four unique abilities, as well as six abilities shared with the rest of the Shieldbands:

Which Fighters are best for the Tempest’s Eye Warband?

The most iconic fighters of Tempest’s Eye in the lore are the Outriders, which can be represented in Warcry by Freeguild Outriders, Freeguild Pistoliers and the Leader Sharpshooter with Grenade-Launching Blunderbuss. All of these are expensive, mounted fighter types, so they’re not great for a competitive list (since fighters with the Mount keyword can’t climb or pass through doors and arches), but their ranged weapon actions, as well as the combination of their own Move characteristics and the unique abilities of your warband, mean that they’ll be able to target almost any enemy fighter anyway.

Another fighter type that is lore-appropriate for Tempest’s Eye is the Shadow Warrior and its Leader version, the Shadow Walker. These are awesome models with average melee and ranged weapon profiles for a ranged unit, but they’re a bit expensive compared to Darkshards or Freeguild Crossbowmen, so in a competitive environment you might want to take those instead.

Another way of choosing fighters for the warband could be to look for fighters you wouldn’t normally bring due to their low Move statistic: Longbeards with Ancestral Great Axe or Hammerers suddenly become a much better option if you know you can turn them into natural sprinters with abilities that will let them move like heavy cavalry for an activation.

If you want a Leader or Hero with the Mystic keyword, you could choose the Handmaiden of the Thorn who can keep up with the rest of a mounted warband, but since your Mystic ability Eagle Strike can hit any enemy fighter your Leader can see on the battlefield, you could save 25 points and just go with a Battlemage or Sorceress instead.

Tactics for the Tempest’s Eye Warband

The unique abilities of the Tempest’s Eye warband clearly outline how the warband should be played: They all give you an advantage when it comes to mobility.

Outriders of the Realms gives one fighter a bonus move action that can exceed the fighter’s Move characteristic if you have the right Double roll.

Outmaneuvre the Foe is an excellent Quad ability that allows you to make bonus move or disengage actions with a number of friendly fighters at once. This can really change the outcome of a battle round, since it disables the “I go, you go” alternating activations of the game’s rules for a moment, preventing the enemy from interrupting or responding to those move and disengage actions until they’ve all been carried out.

Swift as the Wind improves the Move characteristic of all friendly fighters in an area for the duration of the battle round, which can also be a great advantage, and while Summon Eagle Strike isn’t the best damage-dealing Quad out there, halving the Move characteristic of a visible enemy fighter anywhere on the battlefield is a great way of controlling an enemy fighter you want to take down (or want to steer clear of).

As mentioned in the fighters section, there are generally two ways you can take advantage of all that added mobility: Firstly, you can make at least one of your battle groups consist of mounted fighters such as the Freeguild Outriders or Freeguild Pistoliers to make fast fighters even faster and be able to reach any point of the battlefield. Secondly, you can take slow fighters who are good in melee in a battle group with a Leader and move them quickly across the battlefield with Swift as the Wind.

No matter how you play the Tempest’s Eye warband, you’re not going to have a problem reaching objectives and treasures. You have no unique abilities that boost Attacks or damage, however, so make sure to bring fighters that can do some damage on your own, since you’ll spend most of your ability dice on movement abilities.

This list aims to demonstrate the tactics described in the tactics section, as well as to look like a Tempest’s Eye warband from the lore. This means it has a low model count, so for a competitive game, consider taking infantry instead of the mounted fighters. The Hammerers suggested in the strategy section were replaced by Wildwood Rangers here to bring up the model count a bit and fill out the 1000 points cost.

Colors of the Tempest’s Eye Warband

The colors of the Tempest’s Eye warband are various cold shades of blue combined with cold whites. Even the metallics have an icy blue hue, which can be achieved using washes such as Drakenhof Nightshade (which is very dark) or some of the blue Contrast paints, if you thin them down with a lot of Contrast Medium.

When painting a Tempest’s Eye warband, there’s also a good chance that you’ll have to paint a few horses for the Freeguild Outriders. Warhammer TV recently released a video showing how to paint horses in two different colors using Contrast paints, which can be viewed here. 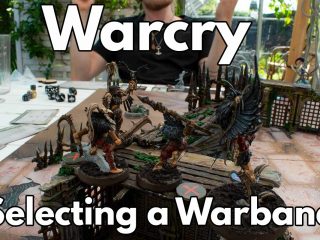 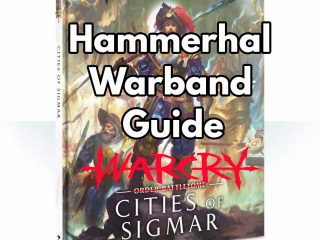