When people ask for help on deciding an army, a lot of people will say something to the extent of “just pick an army you like the look of”. This is okay advice, but it in large part the answer assumes that people know what they like or even know how the playstyle of different armies is. Not really that helpful when trying to pick an army!

In this article, I will list 11 steps that should make you ready to decide on your Age of Sigmar army.

I have also made a video on a very similar topic.

Table of Contents show
1. Learn what options you have available
2. Figure out what kind of project you are looking to do
3. Know whether or not you have a budget
4. Think about what kind of miniatures you like the look of
5. How will the army be to paint?
6. Does the lore and background of the army suit you?
7. Try to learn what the playstyle of the army is like and how it feels on the tabletop
8. Think about how competitive the army needs to be in order to satisfy your gaming style
9. Think about how many different builds and kits are available for the army
10. Consider which of those different aspects are the most important for you
11. Make a decision!

1. Learn what options you have available

First, you gotta figure out what different options you actually have. Do you know what factions and armies are available for Age of Sigmar? If not, a good place to start is the GW website itself. Here you can find all miniatures currently available for purchase and the categories/factions GW is currently clumping them together in.

This will go a long way of informing you what different armies there are, but it honestly also a bit clunky.

All good questions and all questions that might affect your decision on what army to get. Only a few of those you can get answered on the GW website.

To help I have created my own overview of the Age of Sigmar armies (you can find it here). In the overview, you can see what armies have battletomes and whether or not they might be due for an update soon. I also try to update it with current rumours and leaks (GW verified and not).

A rule of thumb: only start armies that have a battletome released after Age of Sigmar 2.0 (you can typically see it because they will have Endless Spells and a faction terrain piece). That way you know it is up to date, and the chances of dramatic changes to your army are low.

After looking at the different options, narrow them down to only a few armies that you are actually interested inin. In the next few steps, it can be helpful to write pros and cons for each army as you go through the steps.

2. Figure out what kind of project you are looking to do

So you know you are looking for an army, but what kind of project do you actually want to do?

Think about the armies/factions that you have written down on your paper. How does each one fit your desired project? Does any of them hold an edge over the others?

3. Know whether or not you have a budget

If you are tight on cash or want to keep your expenses at a minimum, this will greatly impact what sort of army you can and should get.

Have a quick look at the difference in cost of buying some of the armies you are thinking about. Does that affect how you view the different options?

4. Think about what kind of miniatures you like the look of

This might be the most important step: if you are going to paint an army, you have to look at each separate model in it and think “damn, that is cool!” This will help you get through those days where you really do not want to paint (and those games where you army really sucks).

Liking the look of the models is one thing. Painting them up is something completely different. In this step you need to visualise how it will be to paint the army.

While my 140 Stabbas army is fun (and surprisingly good), I know it will be a very slow project. I know I can only do it because I am top motivated. Every time I look at a Grot model I get excited! d. If I wanted to do a quick project with a few miniatures that were really fast to paint? I would never have selected the Gitz.

Going through the questions, write down the pros and cons for each army from a painting perspective. Did that alter your opinion on what army to start?

6. Does the lore and background of the army suit you?

For me, a big part of selecting a faction as that I dig the lore, background and feel for the army. If I find the lore to be lacking, I will naturally lose the motivation to paint the army over time.

Places you can about learn about the army/faction lore and background:

Think about whether or not the lore and background for the army really mean anything to you. If it does, take the time and digest some of that information. It might be that you just want cool models with cool rules – in that case, disregard the lore stuff.

Write down the lore/background/feel/artwork that gets you excited for each army. Which faction wins out on this front?

7. Try to learn what the playstyle of the army is like and how it feels on the tabletop

A good start is an army where you like the look of the miniatures, how they are to paint and the story behind them. But if this does not align with how they are to play on the tabletop, you will quickly lose interest in the army.

Sadly, besides borrowing the army and having a game with it, it can be hard to figure this out

Some ways to learn how the army feels and plays like on the tabletop:

Try and describe the playstyles of each of the factions you are considering. Does this fit the vision you originally had with the army? Can the army compete in all of the phases you want?

8. Think about how competitive the army needs to be in order to satisfy your gaming style

For some, being able to compete on the table is really important. They will lose interest if they feel like they are fighting an uphill battle just to win a few games. For those kinds of people, it is very important that the army has a few builds that can realistically win a competitive tournament.

For others, it is just important they do not lose every game they play. If you pick something with an updated battle, you will be sure that the faction can at least compete on a casual level.

Of the different armies you are considering, which one seems to be the most competitive. Does this change your perspective on what to select? Will the army be “competitive” enough for you?

9. Think about how many different builds and kits are available for the army

Some armies are so locked into a few different options and miniatures that it can only be built in the same way. For some pople, this can get boring over time.

Think about the options you have available in terms of builds and miniatures for each army (the longevity of the army). How does this impact what you think of the different factions?

10. Consider which of those different aspects are the most important for you

Which of the steps contained the elements that were the most important to you? Which army scored the best in those?

Now consider everything from a holistic perspective. Which army is your gut, right now after going through all the steps, telling you to get?

People spend AGES trying to decide on what army to get. While it is important to get this right, you can also spend too long considering the different options.

Even though I have gone through this process multiple times, it feels like I still end up with the army I thought I should get from the beginning. The first intuition often turns out to be the best decision.

Now, go buy that army you have always wanted!

(Looking for a place to buy everything on the cheap? Order it online from Goblin Gaming today!) 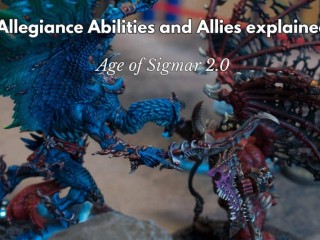 What is Allegiance abilities and Allies in Age of Sigmar 2.0?
← Read Last Post 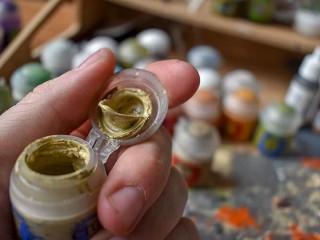 Miniature Painting for Beginners & How to Get into the Hobby
Read Next Post →
Comments are closed.