Point system and Matched play for Age of Sigmar: what is it?

If you are new to Age of Sigmar you might be wondering:  what the heck is this “matched play” people are talking about?

This is described in section 25.0 of Age of Sigmar 3.0 core rules, but if you still have some questions regarding matched play and the points system in AoS, I hope this article will be able to answer them.

If something is missing, feel free to comment down below.

Things in this article show
1 Point system and Matched play for Age of Sigmar: what is it?
2 3 different ways of playing
3 Matched play: how does the point system work?
4 Tournament packs
5 What is a normal points limit?
6 My unit does not have a pitched battle profile. Can I play with them in matched play?
7 What is effective in matched play?

Open play is a ‘play how you like’ style, and was the way AoS was originally written. You and your opponent’s fun are the key and balance is something that is mostly left up to the players. This style of play resonates very badly with wargamers who want a very ‘competitive’ game, however recently it has been introduced the point system even here.

Despite the use of points, games are still random and the composition of armies left to players’ creativity, it is also possible to play with more than 2 armies in certain iterations. Read more in our article.

In narrative play, the story is the big focus. Age of Sigmar 3.0 renamed it Path to Glory and introduced many new rules but more importantly, rewards to play a narrative campaign. What is even better, following examples from other GW games like Warcry, you can play your own narrative campaign without your opponent being part of it. This way you can still participate in a matched play tournament without compromising on your own personal quests.

For more details on Path to Glory, read our guide.

In matched play you agree to a point limit with your opponent and you follow the additional rules and limitations, as set forth in the relevant Battlepack. A Battlepack (section 28.0 of core rules) is a set of instructions on how to play a game of Age of Sigmar and what constraints, limitations or extra rules. Note that there are battlepacks for any of three ways to play AoS, those related to matched play are presented in the Generals Handbook.

The current one is called Pitched Battles 2021 and happens in Ghur, the Realm of Beasts.

What follows is a step by step explanation for the matched play system, you can find the actual rules in section 25.0 of the core rules.

Matched play: how does the point system work?

Agree on a point limit for the game

Before your game, you need to agree on a point limit with your opponent. If you play a tournament the point limit will be set beforehand. You can fill your army with units (and other stuff) up to that point limit, but not above it. The battlepack will set what point limits you can use but in the Core Rules Contest of Generals battlepack the ones allowed are: 750, 1000, 1500, 2000 and 3000. In Pitched Battles 2021 only 1000 and 2000.

Find the pitched battle profile for your units

Each unit or warscroll costs a certain amount of points according to its pitched battle profile. You can find the pitched battle profile for each (legal) unit in either your battletome or the newest generals handbook (whichever has been released later). Always consult the FAQ page in Warhammer Community to see if there has been a change to your battletome and if that includes point changes as well.

You must always use the latest version of a unit warscroll and its pitched battle profile. You can also find the points in the Warscroll builder and the subscription part of the official AoS app. Not all units have a valid pitched battle profile, the latest General’s Handbook will determine which armies or units are current valid. For example Legions of Nagash is not a valid army anymore (replaced by Soulblight Gravelords) and as such the Bat Swarm is not a legal unit anymore.

Example of pitched battle profiles and points costs for a unit

At the end of every battletome or General’s Handbook, you will find a table like the one above. This lists all current valid units for that faction (and the only ones that can be used when fielding that faction in matched play). Every unit has a unit size (how many models you need to field for that unit), a point cost, a battlefield role and some notes.

For army building consult our guide where we go in detail on how the different battlefield roles and notes influence what units should be taking and how many.

For the purpose of this guide, suffice to say that you sum the cost of all models that you want to take and the total has to be lower or equal to the point limit you set at the beginning. The player with the lower total has access to a Triumph (a once per game bonus to a specific die roll, see section 27.3.6 and for a list of universal triumphs 27.5.5).

Endless spells and Invocation are specific models that represent magic or divine manifestations that can be summoned to the battlefield by wizards or priests. They do have a point cost that you need to pay in advance but after you can summon it anytime you want following the rules for Endless Spells (section 19.3) and Invocations (20.3). See our guide for more details.

You can also field allies in your army if your faction allows it. You can find the list of available allies at the bottom of the Pitched Battle Profile for your faction.

There are limits on how many allies you can field (based on the point limit and battlepack) but generally speaking those behave as “mercenaries” without many synergies with your main faction and are mostly used to complement a missing trait for your faction (for example if you are missing a powerful Wizard, a shooting unit, etc.).

You can read more about Allies and Allegiance Abilities in the article here.

Most tournaments will use their own battlepack including which battleplans will be used during the event and any other special rule. GW advises tournament organizers to use Pitched Battles 2021 that includes 12 battleplans and point limit set at 1000 and 2000 points.

But some tournaments may have different rules so always consult carefully the event instructions.

Normally a big 5-day event will use 2000 points and most rules as seen in the most recent battlepack published by GW. There may be a cutover date for which battletomes or armies are allowed, for example a tournament may decide that any book published by GW within 30 days from the event is not legal for that tournament (to allow players to prepare with a stable list of information).

What is a normal points limit?

1000 point is what many groups will start out at and can make for great intro games.

1000 points is a nice starting point for a force. You will not have so many units that your brain will go into complete meltdown from the different rules, but you will have just enough that the game has some tactical depth. Below 1000 points is possible, but I have not found them to be very fun. Big monsters, powerful heroes or massive units can completely wreck sub-1000 point games. There’s a limit also on maximum half of your available points used on a single unit.

Seem to be the next stepping stone. You get a few more units, your army as a whole will become more complete. However, it’s not a supported format for the Pitched Battles 2021 battlepack so it’s probably better to just use the 1000 until you are familiar and then go straight to 2000.

This is right now the default point level for pick-up games or most tournaments. Many of the lists you will see discussed online are using this format.

At this point level, you can get a fully fledged army with all the bells and whistles. But be careful, you are still limited in what you can bring and the decision on what to cut is still hard.

2000 points is the standard point limit and considered ‘the norm’.

If you are serious about the hobby, make sure you can get your army to 2000 points in the future. But remember: start slowly and play low point games! Nobody wants to play a 2000 points grey plastic army or forget half rules during a game.

My unit does not have a pitched battle profile. Can I play with them in matched play?

In Age of Sigmar 3.0 the rules are pretty clear: if it’s not in the latest General’s Handbook or any battletome published later, then it cannot be used in Matched Play.

You can still use it in other game systems, but cannot be field in an official tournament. You can find in this page, all the warscrolls for the old armies and points for them. If your opponent agrees (and who would disagree?) you can still play with them.

What is effective in matched play?

As a new player, you are probably nervous that you are going to invest in something that is ‘not good’ in matched play.

Reality is that what is good and what is bad will strongly depend on the current meta (the armies that are played in the context where you play). We have an in-depth article on army building that you should consult, but you need to understand not all armies are equal and not all armies cope in the same way against all armies.

Outside of few exceptions, there is no universal answer to a problem and you need to be flexible, but most importantly, be prepared to play with your friends, not potential unbeatable armies whose list you have seen online.

Online there are different power ranking charts for the different armies playable in Age of Sigmar (for a list of all AoS armies, we keep one updated here). If you are interested in seeing how your army copes, you can consult those charts but keep them as indicative, as any new battletome or edition can drastically change the balance. The one that we prefer is from the AoS Shorts.

But overall: try not to worry so much about being competitive from the beginning. Get some games in and you will quickly realize what works and what does not work. Figuring out what player type you are and what kind of models you like is even more important than finding out what is broken or not. 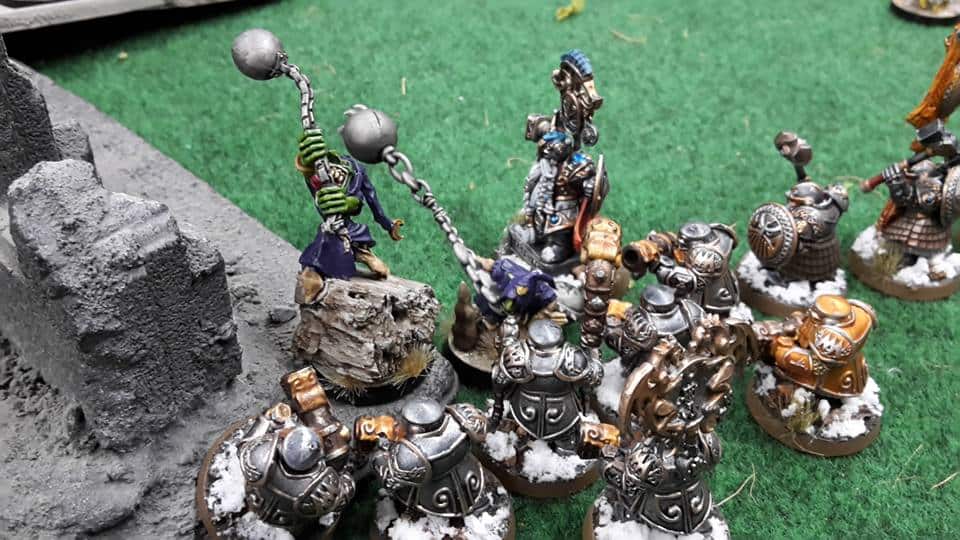