Review of Start Collecting for Daemons of Nurgle

This is a review of the Start Collecting Daemons of Nurgle: the perfect rotten way to start a disgusting and infected army and gather the multiple daemonic blessings of Grandfather Nurgle.

Which models are included in the Start Collecting Daemons of Nurgle Box?

No units in the box can be assembled into different units, so what you see is what you get.

The Poxbringer is one of the 3 heralds of Nurgle and, of the 3, the only wizard. Despite the only 5 wounds, he has a decent melee profile with 3 attacks at 3+/3+, rend -1 and D3 damage.

As most Nurgle units he is also disgustingly resilient (5+ ward save when allocating a wound or mortal wound). He can be summoned for 14 contagion points.

The Plague Drones are the air squadron of Nurgle, a lighter version than the Pusgoyles.

With movement 8” they are one of the fastest units of Nurgle while 5 wound each and resilience makes them quite durable. Within 7” of a Nurgle hero (like the Poxbringer) they get +1 attack on their multiple weapons.

And on top they also have a basic missile attack, making them a complete unit and one that often essential on the tabletop. Can be summoned for 21 contagion points.

The Nurglings are a nice nuisance with high wounds count that can be buffed semi-passively by various heroes like Morbidex Twiceborn.

They become effective in big numbers and as all daemonic minions, they can also be summoned. However, one single model is worth as many points as a Feculant Gnarlmaw (7 points) while 3 are worth 14 points.

In the last rounds, with spare contagion points they can become useful in certain situations.

The Plaguebearers are the only unconditional battleline of Nurgle, excluding all other armies from which Nurgle can pull units from.

They can be buffed in various ways, but even without that their profile, although basic, is quite good.

They can re-roll saves of 1 if within 7” of a hero, are disgustingly resilient and, as most daemons, a battleshock of 1 brings models back. They can be summoned starting from units of 5 all the way to 20 (from 7 to 21 contagion points).

The plaguebearers are just all-around solid and you will see a lot of them in most lists.

Incidentally, this box represents also a good starting point for a Tallyband of Nurgle, a battalion that allows to heal each unit of the battalion and get an extra contagion point if you start the battle exactly with 7 units of combined Plaguebearers and Plague Drones.

Get your Start Collecting Daemons of Nurgle box ordered!

Points cost of the Start Collecting Daemons of Nurgle Box

The total of the box is therefore 540, which is not shabby at all.

Value of the Daemons of Nurgle box

The sum of all models as purchased directly from the GW store is 90£ for a discount of 39%. It’s also the only place to find the Poxbringer outside of GW direct order.

Overall verdict on the Start Collecting Daemons of Nurgle box

Nurgle is the allegiance that can use the most models across the entire Chaos world and with the highest number of start collecting boxes (including Skaven Pestilens, Slaves to Darkness and Beasts of Chaos).

But whichever direction you take, Daemons, Rotbringers or Mortals, you will always need daemons to summon and this box is entirely “Summonable”.

If you decide then to go entirely daemons, this box assumes another level of importance.

The only downside is that there’s not much customization available in this box: no alternative models or weapon options, making multiple Heralds just conversion fodder and the Nurgling useless outside of certain thematic armies.

If you are eager to receive Nurgle’s blessing, you can’t err by buying at least 2 of these boxes.

Buy your own Daemons of Nurgle Box today! 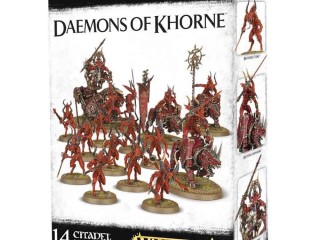 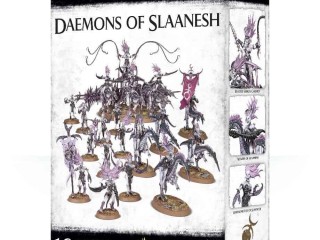 Review of the Start Collecting Slaanesh Box
Read Next Post →