This is a review of the Start Collecting Slaves to Darkness box: an entire new Start Collecting push-fit box for your chaos undivided army… or any other of the 4 Chaos Gods army in need of mortals.

Which models are included in the Start Collecting Slaves to Darkness Box?

There is no alternative sculpts or models, as this box is entirely push-fit.

The analysis of the following models will consider them in a Slaves to Darkness army, but all models are available in any Chaos God army (Khorne, Tzeentch, Slaanesh or Nurgle) and the Chaos Warriors will count also as your battleline.

The Chaos Lord on Karkadrak is a brand-new model, for now exclusive to this set.

As all units included here, he can be assigned a Mark of Chaos and since he is a hero, he can project this aura within 12” of himself (or 18” in a Despoiler army) to any friendly unit wholly within.

The Aura of Chaos adds nice bonus to the units nearby as long as they share the same mark as the hero, so it’s important to keep them consistent. Assigning a Mark of Chaos means also that you are able to field that unit within a Chaos God army without considering it as an ally.

The Undivided Mark of Chaos Aura allows to avoid battleshock tests and negate wounds or mortal wounds on a 6+.

The next generic ability of the Chaos Lord is Eye of the Gods that allows to roll on a reward table each time an enemy monster or hero is killed by this hero. The rewards go from becoming a Chaos Spawn to becoming a Daemon Prince so extremely thematic.

Add a 5+ mortal wound ward and a D3 charge damage on a 2+ and you have an extremely focussed melee hero able to survive prolonged melee (he can heal himself back when killing models with the axe).

For a command point he allows Chaos Knights (and the Chariots) to re-roll charge rolls and adds +1 to the hit roll until the next hero phase.

This dude is pretty sweet!

The Chaos Warriors are the staple of a Chaos army representing the first step taken by the barbaric tribes in the Path to Glory, the ascension to daemonhood.

In this box there are 10 models, enough for 2 units, but only one leader option, the Aspiring Champion.

Another noticeable absence is the rest of the command set: the bearer and the standard set, same bonus as the Knights.

These new warriors’ heads are fully compatible with the old heads but in addition the set comes with unhelmeted options featuring men and women.

What does not feature is the different weapons available: only Hand Weapon and Runeshield are available. The halberd would give an extra inch of range and the greatblade a -1 rend, respectively losing -1 to wound or to hit.

The shield provides the same 5+ ward save as the Knights while a pair of hand weapons would allow to re-roll hit rolls.

Overall this is the most risk averse solution but you don’t have option and if you want to integrate the rest of the command set you’ll need to remember that you need to keep the same weapon profile for the whole unit.

The Bloodstoker is another hero particularly useful to buff your units, his ability has a short range (wholly within 8”) but allows one unit selected to re-roll wound rolls and adds +3” to run and charge.

The Bloodstoker is also essential or optional in a few battalions making him good to have available as a mini for you.

Points cost for the Start Collecting Slaves to Darkness Box

Get your own copy of the Start Collecting Slaves to Darkness

Using the points from the battletome:

That is a total of 530 points in the slaves to darkness box.

Value of the Start Cikkectubg Slaves to Darkness Start Collecting

It’s difficult to price the value of this box as the Chaos Lord on Karkadrak is for now exclusive to this box and the other 15 models are new versions of existing dated models although push-fit only.

An easy-to-build Lord-Arcanum costs 25£ so overall this box would not offer too much discount, but you have to consider the much more varied poses of these figures and the fact they are not available outside of this box (for now).

Overall verdict on the Start Collecting Slaves to Darkness box

Why not start your Slaves to Darkness army today?

If you are starting a Slaves to Darkness army, considering the previous Start Collecting box has been retired, this is your starting point.

You can also consider this box for any of the other Chaos Gods and theme them on your favourite god.

The absence of the command set can be mitigated with some conversion: standards and music instruments can be available in many other armies.

If you are not too confident or don’t have spare parts, you can always complement these units with an old box. The Chaos Warriors have also available on the main GW store two weapon upgrade packs for halberds and greatblades that should be compatible with the new models (again some conversion skills may be required).

Overall, this is a good starting set with fresh new sculpts to be used in an existing Slaves to Darkness army or the first path towards the Path to Glory.

With the potential to re-use the same units within multiple armies this will suit different types of players. The presence of the Karkadrak may however discourage multiple purchases. 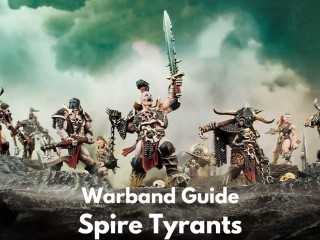 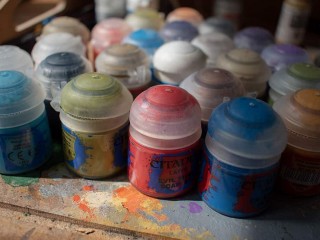 Best Paint for Miniatures, Figures & Warhammer in 2020
Read Next Post →
Comments are closed.