Warcry Terrain: How to Use it, What to Buy, & How to Paint it

Since the original Starter Set for Warcry is no longer in production, new Warcry players are faced with a confusing amount of options for choosing their first battlefield terrain.

Luckily, I am here to help. This article takes you through the pros and cons of each available Warcry Terrain box, as well as a few other methods for building battlefields for your Warcry games.

In this article hide
1 What is Warcry Terrain, and how does it work?
2 Find the right terrain for you:
3 1. Find a starter set
4 2. Buy one of the Ravaged Lands boxes
5 3. Use the optional terrain rules from Tome of Champions!
6 4. Buy the Catacombs expansion

What is Warcry Terrain, and how does it work?

Terrain is very important in games of Warcry: some fighters benefit from attacking from a higher position than their target, and terrain provides cover from ranged attacks as well as blocking line of sight. It also gives you a way to move vertically, making the battlefield larger than the small area it is played on.

The rules for the game state that you create battlefield by randomly drawing terrain cards from at terrain card set, and then subsequently drawing battleplan cards that tell you what to do in each battle, so terrain interacts with the game’s rules and objectives in a myriad of ways.

You can just use whatever terrain you can find if you don’t mind bending the game rules a little, but if you want to get the full experience of the games rules, here’s a guide for the different terrain options available at the moment.

Find the right terrain for you:

The original starter set for Warcry is no longer in production, but if you’re lucky enough to find a set at a local game store, it is still definitely the best option. In the starter set, you get:

That’s really all you need to play Warcry for many hours! You can find my review of the warcry game and the starter original starter set here.

Also note that the starter set terrain is the default terrain for many of the campaign battles for different warbands as well – it’s just really good to have this set if you’re getting into Warcry.

Luckily, it looks like the upcoming Catacombs set is bringing some of it back, but more on that below.

2. Buy one of the Ravaged Lands boxes

If you already have the starter set, or you want terrain with a different style, the next product to get is one of the Ravaged Lands sets. They all come with 36 terrain cards and a set of tokens, but not with the battleplan cards that you need to generate your missions.

The following Ravaged Lands sets are available at the moment:

3. Use the optional terrain rules from Tome of Champions!

The expansion book Tome of Champions for Warcry is a great resource for exciting battles, fighter cards and campaign additions, but in my opinion, one of the coolest sections of the book is a set of three ways to generate Warcry battlefields without adhering to one of the official terrain boxes.

It suggests that you either:

All of these ideas let you use terrain that’s not covered by the Warcry range, like all of the weird Age of Sigmar faction scenery, and even third party scenery from other companies, and I think it’s a great, and often more affordable, option.

If you are looking to get some terrain made for you, you can check out our review of the terrain we had commissioned from Go to Ground Wargaming.

Finally, you will soon be able to buy the new starter set, Warcry: Catacombs!

This set features a new way to play underground, indoor battlefields with lots of sharp angles and corridors, but with less verticality, as well as a second battlefield with what looks like half the terrain from the original starter set.

The Catacombs set also includes the core rulebook, a new expansion book for Catacombs battles, as well as two brand new warbands, the Scions of the Flame and the Khainite Shadowstalkers. We’ll update this article when we know more about the new game mode and how terrain works in it, as well as a release date for the set. 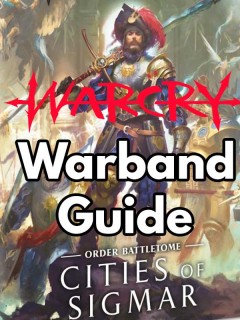 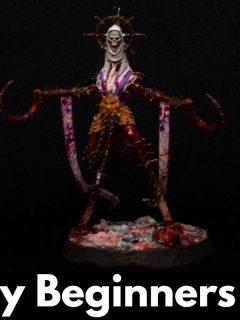