Review of the Start Collecting Daemons of Tzeentch Box

This is a review of the Start Collecting Daemons of Tzeentch: anything can change, so if you are ready to challenge your fate here is the way.

You will usually get at least 1 character, 1 sort of “basic unit” (many times a battleline unit) and 1 unit that is a bigger elite/monster type sort of deal

Which models are included in the Start Collecting Daemons of Tzeentch Box?

In combat this model does his best at range with 6 attacks at 18” range for D3 damage and a 50% chance of extra D3 damage (but on a roll of 1 heals back D3 wounds to the enemy).

One Burning Chariot is also quite expensive costing 18 Fate points to summon.

The Herald is a not only a Leader but also a wizard with a missile attack (18”) able once per battle to roll 3 dice instead of 2 for a casting roll and on a roll of 9 or more can cast one extra spell per phase.

Once mounted on a Burning Chariot it loses the missile attack and the extra cast on a 9+ but gets more melee attacks and a spell that can potentially damage all units within 9”.

Both versions have their utility, indeed the mounted one can move 14” (plus run) and summon a unit up to 12” away to reach a far objective or tactical point.

When the Chariot is assembled as a Herald, there are 3 spare Blue Horrors that can be assembled separately.

The Exalted Flamer of Tzeentch is an advanced version of a Flamer with double attacks but no Locus of Transmogrification (every time a Flamer dies within 9” of a Tzeentch hero, on a roll of a 6, two models are added).

Exalted Flamers can be put in units from 1 to 6 models, while normal Flamers are in units of 3 to 12. Both units have a movement of 9”, can be summoned (18 Fate points for 3 Flamers or 12 for 1 Exalted) and may have some utility on the battlefield, however there are other units with similar point cost that perform better.

The Screamers are an extremely versatile unit with a low point cost, movement of 16”, decent attacks and an aura activated when near heroes for a -1 to hit to enemy units attacking them. It was a much better ability before, but they remain one of the cheapest units to summon for 10 Fate points.

The Pink Horrors are the daemonic battleline of a Tzeentch army, and one you can’t really do without: in a mortal army they can be summoned for 20 Fate points, in a daemon army they are one of the best units you can have.

They are not heroes but can cast spells and unbind, have missile attacks at 18” range and, when they die, generate Blue Horror points that can be used to summon Blue Horrors units.

Basically, when paying for 10 Pink Horrors you are also including 20 Blue Horrors and 20 Brimstone Horrors (in summoning) for extra nuisance and body count.

Why not started with your Tzeentch army today?

Points cost of the Start Collecting Daemons of Tzeentch Box

The Herald of Tzeentch is a Leader worth 140 points on foot and 200 on a Burning Chariot. An Exalted Flamer costs 90 points.

If you assemble the units as pictured on the box it will a total of 570 points.

Value of the Start Collecting Daemons of Tzeentch Box

The sum of all models as purchased directly from the GW store is 85£ for a discount of 35%.

The box includes also all bases for the different alternative models available, including 3 blue horrors.

Overall verdict on the Start Collecting Daemons of Tzeentch box

While waiting for the new battletome, Tzeentch daemons get a head-start with this good box.

Considering the different assembly option of the main unit and the versatility of the other units within, multiple boxes are also a good investment.

Some units may get better in the next tome, but Pink Horrors will probably remain a staple of this army.

For now, Heralds are good heroes to fill up the army after you selected your core and all units in the box (including the herald) are options available in the much dreaded Changehost, the battalion that allows to swap units within distance of a Lord of Change for maximum tactical advantage.

And after the fourth box, depending on your assembly options, you get a free unit of Blue Horrors, extremely Tzeeetchian… 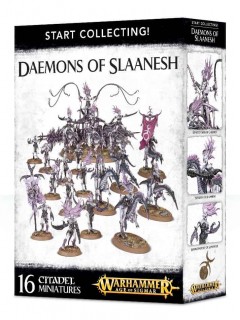 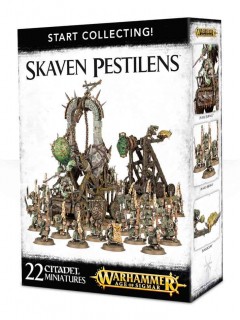 Next
Review of Start Collecting Skaven Pestilens
Comments are closed.