Grandfather Nurgle is the benevolent Chaos God of plagues and diseases spreading his “gifts” to everyone, willing or not. Nurgle’s Daemons are as cheerful as their master and live to fester all Mortal Realms.

Are you ready to spread Nurgle’s blessing in the Eightpoints? This is the guide for the Nurgle Daemons warband in Warcry.

Background and Lore of the Nurgle Daemons Warband

Nurgle is by his followers called Grandfather because he distributes his gifts equally. He rejoices in death and decay because from rot and corpses new life can bloom in form of maggots, parasites, flies, etc. He is akin to the Goddess of Life Ararielle (but quite a bit more nasty), and as such he long coveted her realm Ghyran, until Sigmar rescued her and together closed the main entrance of Nurgle’s armies in the Realm of Life.

Nurgle’s daemons are a mirror of their creator, happy to fester any corner of the realms and distribute the dubious boons under form of diseases and pestilence. At the lead of a daemon’s army there are Great Unclean Ones, similar in shape and form to Nurgle himself, a huge mass of rotten flesh, ichor and pus. The most numerous warriors of these armies are the Plaguebearers: one-eyed beings covered in every sort of disease. Some of them ride Rot Flies in battle and are known as Plague Drones.

While the Plague Drones roam in the sky, on the ground horrible slug-like Beasts of Nurgle charge to battle in search of unlucky playmates. Wherever Nurgle’s armies go, a carpet of small Nurglings follow them, literally drowning their opponents in swarms.

But how do grandfathers minion play on the tabletop in Warcry? If you have the stomach to continue, let’s have a look at the most disgusting details.

Overview and Points for the Fighters in the Nurgle Daemons Warband

Maggotkin of Nurgle Daemons warband is made from 4 kits with 6 options of which 2 are leaders.

The Plague Drones are the fastest unit of this warband with 6” flying Movement that allows them to reach corners otherwise difficult. High wounds (30 or 35 for the Plaguebringer) and Toughness (4) will allow them to resist most attacks and, on the other hand, dish out some of their own.

The Plaguebringer presents 4 attacks at Strength 3 for 2-4 damage, while the base Plague Drone has only 3 attacks and minimum damage 1. The Rot Fly Venomous Sting allows for a Double to immobilize a victim: on a 2+ the enemy cannot do disengage or move actions for the rest of the battle round (pretty good for a double).

The leader has access to the Grandfather’s Blessing that provides +1 Strength to every friendly fighter within 6” of the leader for the cost of a Triple. With an average Strength of 3, a bonus of +1 is a welcome addition to ensure the toughest opponent are taken care of.

All units in this warband also have access to Disgustingly Resilient that for a Double allows to heal back some wounds (on a 4+ for each dice rolled).

The Plaguebearers are cheap units, including the cheapest leader of this warband, to be used as sacrificial pawns.

Despite this they still have a decent profile: 10 wounds (20 for the Plagueridden), Movement 3”, Toughness 3, 3 attacks at Strength 3 for damage 1-4 (same as the Plague Drones). The Plagueridden as well shares the same weapon profile of the Plaguebringer.

What distinguish the Plaguebearers is their trademark ability: Cloud of Flies. This ability costs a Triple but reduces by 1 the number of attacks that targets them. While normally a strong unit would get rid of them easily, horde units may start to struggle to remove a strategically placed Plaguebearer.

If that was not enough, with a bit of luck on a Double they can also heal back with Disgustingly Resilient. The Plagueridden can also use Grandfather’s Blessing increasing the Strength of close fighters.

The Beast of Nurgle is the elite unit of this warband. While missing the Beast rune itself (meaning they can still open doors), it is a bestial unit with 30 wounds, Movement 4”, Toughness 4, 4 attacks at Strength 4 for 2-4 damage.

Its ability, Acidic Slime Trail, allows it to perform a bonus disengage and damage the unit at the same time, possibly to finish off a horde unit preventing the Beast from engaging more succulent objectives.

The Nurglings are an interesting fighter, or to better put it, a swarm of mini fighters. With 30 Wounds but Toughness 3 can take some punches before being knocked out, but then for a Quad, you can heal them as much as 12 wounds in a single round. The advantage of this ability is that it doesn’t matter if they are already engaged, as opposite to other similar abilities like the universal Respite. Why would you use a Quad to prolong the life of a Nurgling? That will most likely be situational, but surely an instrument more in your arsenal.

Strategy and Tactics for Nurgle Daemons

Maggotkin of Nurgle: Daemons is an interesting warband making good use of the various disgustingly Nurgle demon units. Each unit feels like it has its scope and place:

What this warband is missing is some ranged attack, but that is the case for a lot of warbands.

There are 2 leader options but considering you should not struggle with points in the roster, the Plaguebringer looks a more resistant option than the Plagueridden. It also has better movement (6” flying versus 3) allowing him to be in the right place to summon Grandfather’s Blessing and provide +1 Strength to all nearby friendly units.

The other difference between the two leaders is their unique ability, shared also with their base unit: Plaguebearers can reduce the number of attacks towards them with a Triple (Cloud of Flies), while Plague Drones can prevent move or disengage actions of a target enemy unit (Venomous Sting). While the first can make the Plagueridden more survivable, affects only the user of the ability and would therefore sacrifice Grandfather’s Blessing. The second ability is so situational that can be left to another Plague Drone without feeling the absence.

The Beast of Nurgle is not the strongest or most resistant unit in the game but has a well-balanced profile for its point cost. In addition, if bogged down by horde units, for a mere Double (Acidic Slime Trail) can perform a bonus disengage and damage the unit potentially finishing it off (up to 6 damage depending on the value of the Double). It can be useful to abandon a cheap unit almost dead and concentrate the remaining attacks on something meatier.

The Nurglings have 6 attacks for relatively low damage, but their strength is in the numbers. With well 3 abilities to heal them (Disgustingly Resilient for a Double, the universal Respite for a Triple and Endless Swarm for a Quad) if you want to keep them alive you definitely can! Why you would do that, would probably depend on the scenario but if you are playing tag, with 5” Movement, they are definitely your best bet for the long run.

All units in the warband have a chance to regenerate some wounds for a Double, compensating with the otherwise quite low Toughness (3). But the best buff comes from Grandfather’s Blessing, that needs to be used at the right time to maximise the decent number of attacks available by the different units.

Pros and cons of Nurgle Daemons

How to buy the Warband

Independently if  you are starting a Nurgle Age of Sigmar army or just want a Warcry warband, the Start Collecting! Daemons of Nurgle is an excellent starting point. Basically, all miniatures available are in this box: this includes 3 Plague Drones, 10 Plaguebearers and 3 Nurglings, the first 2 with their own leader option. The only missing models would be the Beast of Nurgle, available in a single model box.

We have a review of the Daemons of Nurgle Start Collecting box if that is something that interest you.

Check the price of the Daemons of Nurgle Start Collecting

If you want to buy individual boxes Plague Drones are available for £35, Plaguebearers for £22.5 and Nurglings for £20 (as of right now). But yeah, that start collecting is really the way to go.

Nurgle’s Daemons are available in different game formats from Warhammer 40k to Age of Sigmar, so there is plenty of tutorials out there. The best thing is that you can be messy when painting Nurgle armies.

From Warhammer Community you have the new battle ready tutorials with the classic and contrast method for Plaguebearers.

For the Rot Fly on the Plague Drones you can find details like the wings or if you have an airbrush this tutorial.

Not really a painting tutorial but if you are good at sculpting this video shows a nice way to make two Beasts from one single box with some clay.

Finally, Nurglings can be painted in different ways, here is an example. 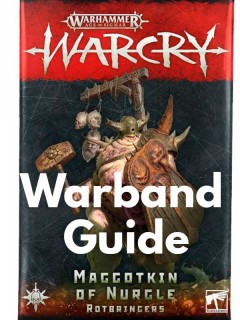