Grandfather Nurgle is the benevolent Chaos God of plagues and diseases spreading his “gifts” to everyone, willing or not. The Rotbringers are Nurgle’s chosen, blessed with his boons from a vast array of mortal followers. Are you ready to spread Nurgle’s blessing in the Eightpoints?

Background and Lore of the Nurgle Rotbringers Warband

Nurgle is called by his followers Grandfather because he distributes his gifts equally. He rejoices in death and decay because from rot and corpses new life can bloom in form of maggots, parasites, flies, etc. He is akin to the Goddess of Life Ararielle, and as such he long coveted her realm Ghyran, until Sigmar rescued her and together closed the main entrance of Nurgle’s armies in the Realm of Life.

Many populations surrendered to Nurgle seeing in his blessing what other gods denied them by abandoning them. The most zealous and worth of those warriors receive personal boons from Nurgle and become his chosen, the Rotbringers. Nurgle does not thrive in military conquest, his chosen are people who forsake other Chaos Gods while infected in the hope of surviving or loyal followers that poisoned cities or fortresses by bringing disease and plague to those that dared to defy Nurgle.

The most talented commanders become Lords of Nurgle and guide the Rotbringers to battle. The Putrid Blightkings are the chosen warriors, hulking bodies ridden with festering wounds, parasites and spilling innards that know no pain nor fatigue. The most courageous of those warriors undergo a rite called the Feast of Maggots: they willingly get infected with a maggot that will devour his host within 7 days. In that time the Blighking needs to find 77 followers of the other Chaos gods and infect them with the same curse. If he succeeds, he will be blessed with renovated vigour and a Rot Fly. Those cavaliers are thereupon known as Pusgoyle Blightlords.

But how do the Nurgle Rotbringers play on the tabletop in Warcry? If you have the stomach to continue, let’s have a look at the most disgusting details.

Overview and Points for the Fighters in the Nurgle Rotbringers Warband

Maggotkin of Nurgle Rotbringers warband is made from 2 kits with 5 options of which 1 is a leader.

The Putrid Blightkings represent most of your army: slow but resilient with 3” movement, Toughness 4 and 25 wounds (30 for the Blightlord). They have similar weapon profiles but each a special ability that differentiates it from the others (except the simple Blightking, that is your basic unit).

The Putrid Blightlord is the only leader available in this warband. He has 4 attacks at Strength 4 for 2-5 damage that makes him a hard nut to crack with a punch back. He has access to Grandfather’s Blessing, that for a Triple creates an aura of +1 Strength on a 6” radius around him. That means the warband for that turn becomes Strength 5, that should be more than enough.

The Putrid Blightking with Sonorous Tocsin has 2” range for 4 attacks at Strength 4 for 1-4 damage. His special ability, Toll the Sonorous Tocsin, provides a bonus +1 Move within a 6” radius. While this ability is useful especially on the first round and with correct placement, the universal ability Rush already provides a +1 Move until the end of the battle round. To prefer this ability over Rush you need to have more than 1 unit benefitting from it and ensure both movements start within the 6” range.

The Putrid Blightking Icon Bearer has 3 attacks at Strength 4 for 2-4 damage and his special ability for a Triple provides +1 Toughness to all friendly fighters within 6”. At Toughness 5 now and with high wounds this warband can shrug off most horde units.

The basic Putrid Blightking has the same weapon profile of the Icon Bearer and no special ability for 5 points less. As all units in this warband, they have access to Virulent Discharge that for a Double can do some extra damage to close units and Unnatural Regeneration that allows to heal as many as 12 wounds provided the unit is not already engaged and the Quad is 4 6s…

The Pusgoyle Blithglord represents the winged army of this warband. With a movement of 6” they are also the fastest unit available and 40 wounds with Toughness 4 makes them extremely resistant. With 2” range and 4 attacks at Strength 5 for 2-5 damage, they can hit enemies without being engaged, however their special ability, Venomous Sting, requires the enemy unit to be within 1”. For a Double on a 2+ they can prevent that unit from disengaging or moving for the rest of the battle round.

As all units of this warband for a Double they can do also extra damage (50% each die) or recuperate wound with a Quad.

Strategy and Tactics for Nurgle Rotbringers

Maggotkin of Nurgle: Rotbringers is an elite warband extremely resilient as you would expect from a Nurgle army. There are few models available, but this also means everything is contained in the Start Collecting box for some savings.

Only one leader option will make easier the choice of the formation. The units’ costs are also similar meaning that you may end up with a big gap in your roster if you don’t calculate accurately. Pusgoyles, for example, are expensive but not only they are the fastest model available, they can also fly allowing you to reach places otherwise inaccessible with the base 3” movement of the rest of the warband. Movement can be increased with the Sonorous Tocsin (for a Double) adding 1 to every move starting within 6” of the initiator. This requires accurate positioning or would end up redundant compared to the universal Rush.

Another expensive ability is Unnatural Regeneration that, for a Quad, doubles the result of Respite (costs a Triple and heals as much as the value of the ability). In certain situations where you need a unit to survive to the next round, you may be able to use the Quad efficiently, but in a warband with 25 to 40 wounds with Toughness 4 what you suffer the most are the critical hits and this could not be enough.

Toughness is another value that can be increased with the Blighted Icon for a Triple. Now with Toughness 5, only the strongest units in the game can go toe to toe with them and the others will need to rely on critical hits.

The last buff available to these units is Strength within 6” of the Blightlord when Grandfather’s Blessing is used (costs a Triple). Increasing the Strength of the closer units to 5 ensures high percentage of successful hits and with a minimum damage of 2 even without 6s the damage output becomes extremely relevant.

Now, while technically not impossible (could be pulled off in the third round by keeping all wild dice and a lot of luck), it would be extremely rare but you could have a 6” bubble of +1 Movement, Toughness and Strength. Just two triples would give you the +1 Strength and Toughness required to make a battle round a walk in the park, and that is more achievable.

Where this warband will struggle is to reach the furthest objectives or control them with numeric superiority. Or to chase fast opponents around the table with their limited movement and no ranged attacks. For the rest you should shrug off most nuisances and hit hard pointing to clear the table from the weakest units before sitting on the objectives.

Pros and cons of Nurgle Rotbringers

How to buy the a Nurgle Rotbringers Warband for Warcry

The entire warband is contained in the Start Collecting! Maggotkin of Nurgle that contains 2 Pusgoyle Blightlords and 5 Putrid Blightkings. Even the Lord of Blights contained in the box can be used in Warcry as an allied unit. All different Blightkings profiles are included in the box and do not detract from the correct use of that unit in an Age of Sigmar game.

If you are looking to get the Maggotkin of Nurgle Start Collecting, I have a review on it that might be of interest for you.

Check the price of the Maggotkin of Nurgle Start Collecting

Buying the models separately is slightly more expensive with 2 Pusgoyle Blightlords for £40 and 5 Blightkings for £35.

If you are interested in some alternative Blightking models, then the new Warhammer Underworld warband “The Wurmspat” provides 2 alternative sculps for £22.5 (and at the end of this season those warbands are sold even cheaper without cards).

Nurgle armies are perfect beginner’s armies because they do not require precision, on the contrary the messier the better. In saying so you may want to follow some guidance, Warhammer Community updated their guide with the new battle ready tutorials for classic and contrast method.

There’s plenty of other tutorials like this from Pete the Wargamer. For the Rot Fly you can find details like the wings or if you have an airbrush this tutorial. Alternatively, you can also have a look at the newest Wurmspat warband tutorial. 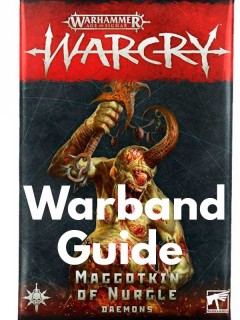 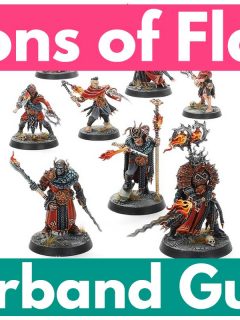 Next
Scions of the Flame Warcry Warband: Guide, Tactics & Overview
Comments are closed.