The earth itself is trembling.

A ravenous horde of ever-hungry Ogors armed with oversized weapons is charging in search for their next meal.

Will you help the Ogor Mawtribes to fill their enormous bellies?

Background and Lore of the Ogor Mawtribes Warband

Ogors worship Gorkamorka as the Gulping God and they ingest anything that passes in front of them, raw or cooked, including the skeletal armies of Nagash that arose from the dead after the Necroquake.

Their insatiable hunger brings them to all corners of the mortal realms and there’s one thing that is important as the next meal for the Ogor Mawtribes:

A good fight! And in the Eightpoints there’s plenty of both.

A Gutbuster Warglutt is usually lead by a Tyrant with a Slaughtermaster performing macabre rituals. The Gluttons make the bulk of the army charging into battle to satiate their unending hunger.

The Ironguts are the elite force of the warglutt, armed with two-handed weapons that used to hack and slash anyone in their path.

On the other side the Leadbelchers prefer to blast enemies to pieces using their massive cannons carried by hand to the front line.

A warglutt mayalso attract numerous Gnoblars seeking protection. In exchange they prove to be useful engineering different war machines and fulfilling other duties for the Ogors.

The fact that they taste unpleasantly when eaten also helps their survivability in the Ogor camps.

But how do they play on the tabletop?

Let’s take a look at their fighters and bone-crunching abilities.

Overview and Points for the fighters in the Ogor Mawtribes Warband

The Ogor Mawtribes warband is made from 3 kits with 8 options of which 3 are leaders. 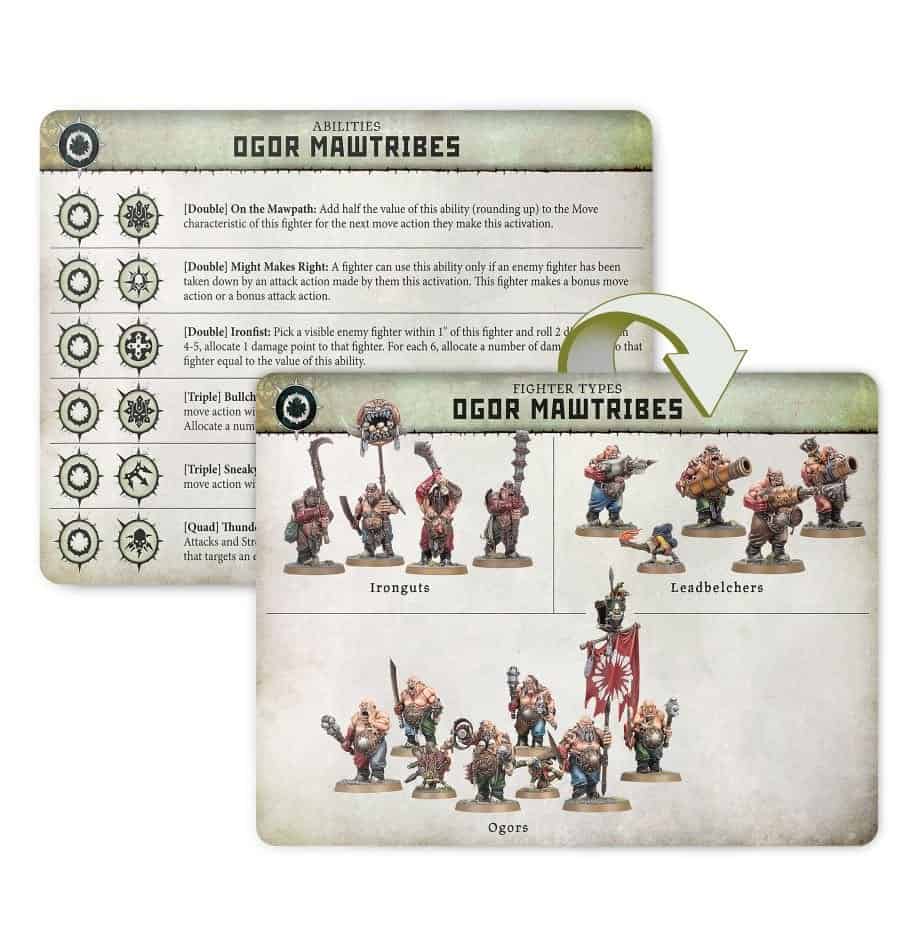 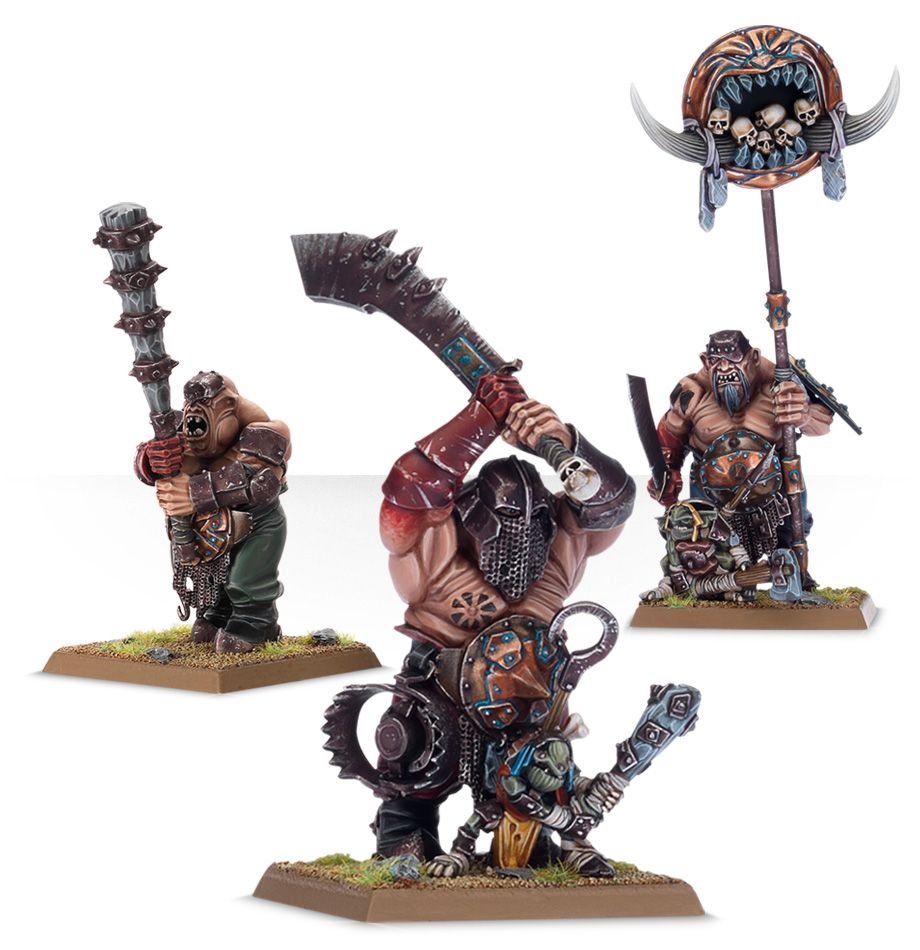 The Gutlord is, right now, the most expensive Warcry unit excluding monsters and allies.

With 3 attacks at Strength 6 for 5-10 damage he can hit consistently and wipe out the smaller fighters in seconds.

The Ironguts do slightly less damage (4-8) but with the same brutal force as their leader.

4” movement don’t make them too quick but all Ogors can increase their movement for one action up to 3” using a Double (for the ability On the Mawpath).

Alternatively, in case of a Double with a low score, Rush can provide 1” extra for both activations allowing an Ogor to run 10” across the field in one activation.

30 wounds (40 for the Gutlord) and Toughness 5 make them extremely resistant and durable.

Another ability available to all Ogors is Bullcharge:

For a Triple they can do up to 6 damage just finishing their movement within 1” of an enemy unit.

And that’s before they start bludgeoning to death their opponent.

The Gutlord, as a leader, has access to Might Makes Right for a Double, providing him a bonus attack or a bonus move if they can take down a fighter in their activation.

If surrounded a Gutlord can become pretty lethal, potentially doing 15-30 damage to 3 different fighters as long as he can kill at least one.

Otherwise, he can always use his bonus move to get closer to the next victim and since movement is often their handicap, this ability is a valid option in their arsenal. 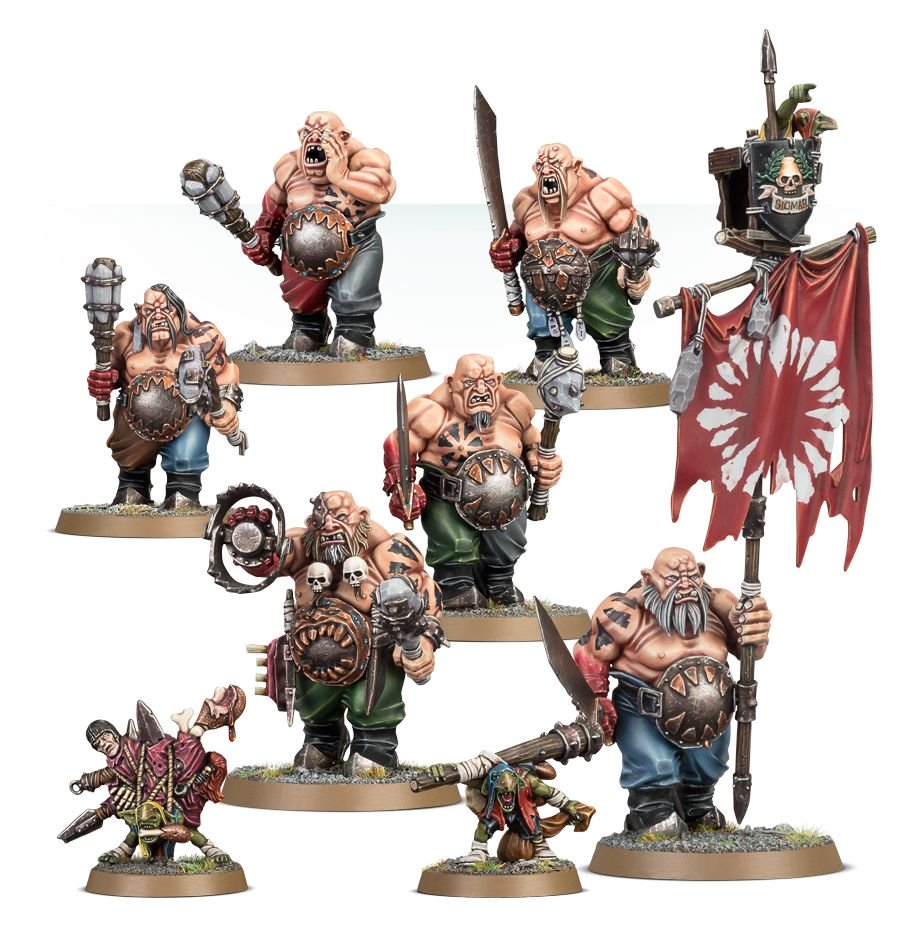 The Gluttons are the bulk of the warband and their leader, the Crusher, is one of the heaviest hitters in the game.

The Ogors also lose 1 Toughness compared to the Ironguts (4 instead of 5) and keep the same movement (4”) and wounds (30 for the Ogors and 40 for the Crusher).

The Crusher and the Ogor with Club or Blade and Ironfist have a special ability, Ironfist, that for a Double allows to do some extra damage on a 4+ on 2 dice.

Statistically, you have 50% chance to do 1 damage but if you are already engaged and you can’t trample your enemies with Bullcharge or take advantage of a Might Makes Right with your leader then could be an option in your arsenal.

Not the best, but okay for chipping off a wound.

The Ogor with Ironfist compared to the one with paired Clubs loses 1 attack (3 instead of 4 at Strength 5) but costs also 5 points less.

The Ogor with paired Clubs is slightly more expensive but with 4 attacks and damage output of 3-6 he can really threaten the enemy frontline and the loss of the ability Ironfist is probably worth it.

The last fighter available from the Ogor box is an outsider: the Lookout Gnoblar.

By far the cheapest unit in the warband (45) and one of the lowest in the game, the Gnoblar is unimpressive with 8 wounds and Toughness and Strength 3. But hey, you need some bodies!

However, he has access to one single special ability, Sneaky Traps, that for a Triple booby traps a bubble around him of 3”.

While escorting your leader or other key units it could be interesting to discourage heavily wounded fighters to block your key pieces to force them to waste their attacks.

The Gnoblar has no access to any other warband ability. 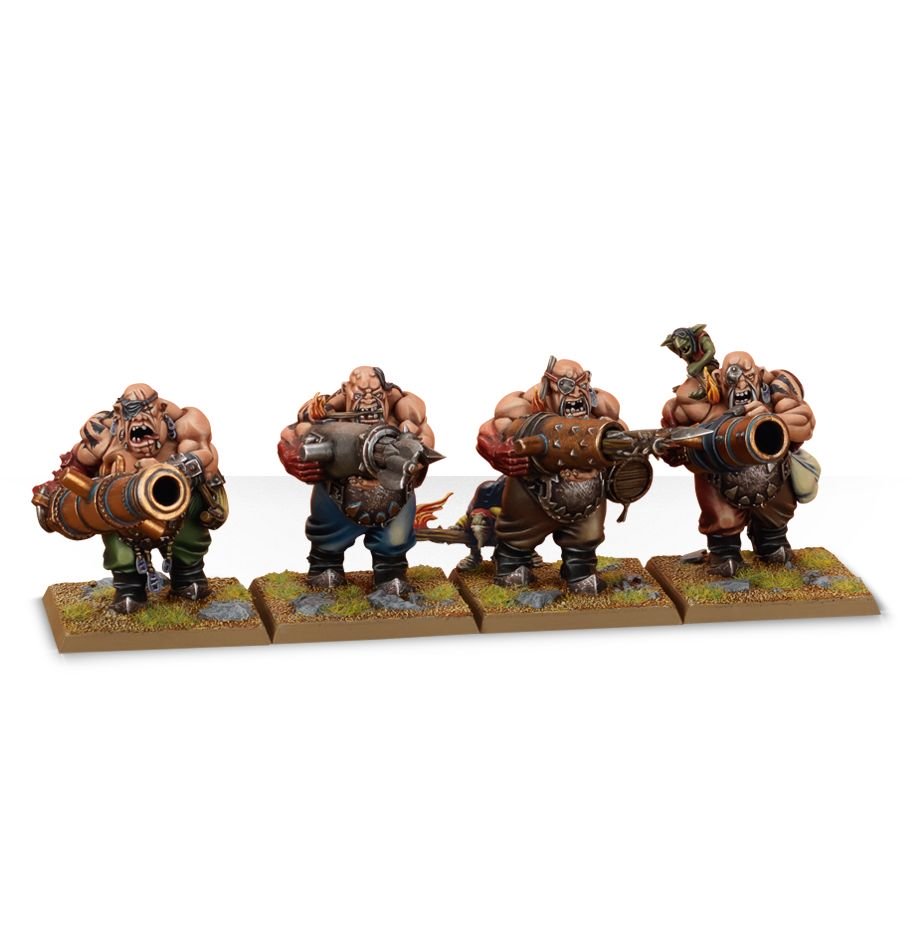 The Leadbelchers are your ranged unit and decently good at it.

With a range of 10” they can do 3 attacks at Strength 5 for 3-6 damages that may seem little compared to the brute strength of their cousins, but considering it’s a ranged attack it is quite powerful.

Again, much less than an Irongut or an Ogor but in an army with movement 4” doing some good damage at 10” distance is essential. And this is some heavy ranged damage!

They do have their own special ability for a Quad:

Thunderous Blast of Hot Metal that can be devastating. With a high score of the Quad (minimum 5) they can get 6 attacks at Strength 8 for one single attack sequence as long as they are blasting away someone more than 3” away.

Considering the high strength, they are going to hit on a 3+ for a potential 18-36 damage on a single shot!

The recommendation is to keep them away but in case you need to get into close business they have access to the same abilities as the other Ogors, namely extra movement with On the Mawpath, damage on charge with Bullcharge and the leader can get a bonus attack or move if he kills a fighter through Might Makes Right.

This can be useful to blast up to 3 enemies per round provided they are on within range.

Did you know we make guides for all Warcry Warbands?

You can find all the warcry warbands guides here.

Strategy and Tactics for the Ogor Mawtribes Warband

Charge as fast as you can and wipe out the enemies from the board!

Jokes aside you have a list of extremely hard hitters and survivable units but be careful on the low count of models in objective-based games.

Critical hits can also really harm Ogors so avoid being too isolated and surrounded. Toughness 4 is just average so most units will hit you on a 4+,  so also take that in consideration.

You basically have 3 types of units:

Mix wisely and you have a really powerful warband.

The Gnoblars can be used to cover the extra points but also to booby trap objectives or simply help with numbers.

The low movement can be compensated in the early turns with Rush or On the Mawpath.

Once you are closing in, charge forward with Bullcharge and keep a Double handy if your leader is surrounded for Might Makes Right.

Until you are in position blast away your enemies with the Leadebelcher/s especially if you have a Quad available for Thunderous Blast of Hot Metal.

Depending on the victory conditions of the game you may struggle to get to the objectives before your opponent or to remove a particularly quick and pesky adversary, but once you get there your brute strength will make the difference.

Do not let the enemy bog you down with chaff units as every attack is precious and don’t forget the Leadbelchers with a range of 10” can help you reduce the gap.

Their attacks are the strongest ranged option between the Destruction warbands compensating for the low model count.

Pros and Cons of the Ogor Mawtribes Warband

– One of the lowest model count warbands

How to buy a Ogor Mawtribes Warcry Warband

all prices used are standard Games Workshop prices. It is possible to get the different things cheaper (check the links for prices).

The Ogor Mawtribes have recently been reimagined in a cohesive Age of Sigmar army but the Beastclaw Raiders side is not represented in this Warcry warband.

As most of the oldest kits, it is highly possible you can find these boxes only through direct order with Games Workshop and only with square bases you’ll need to swap. 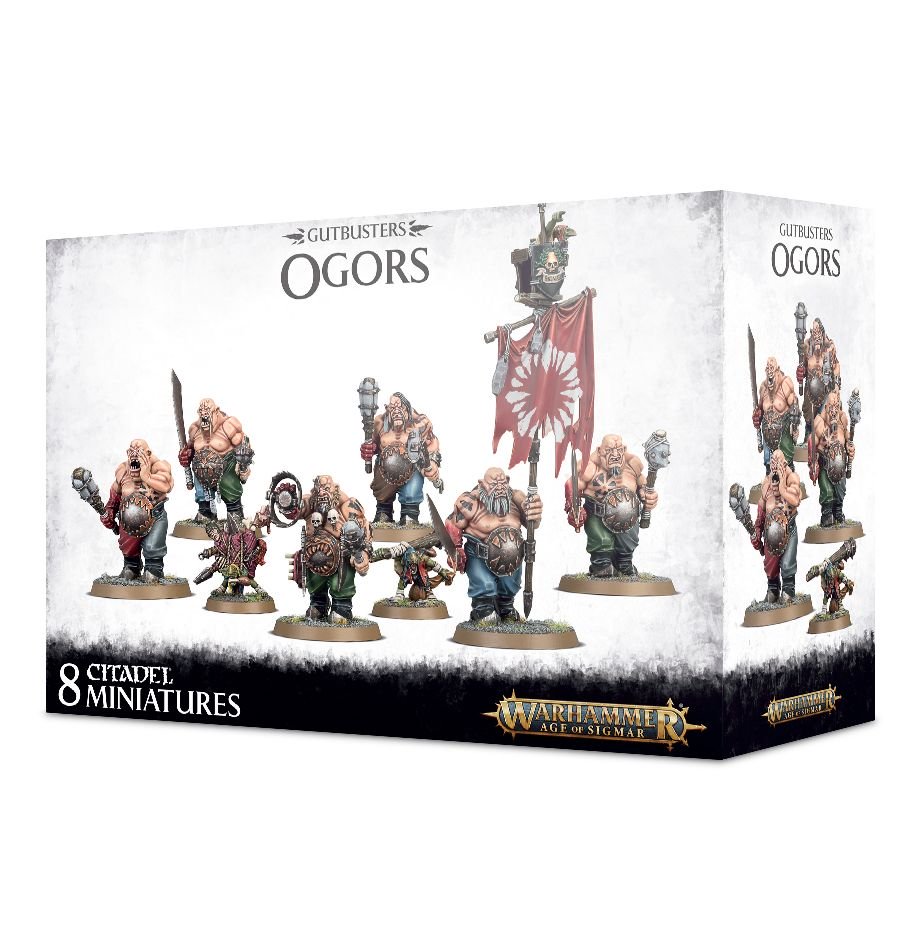 The Ogor Gluttons is one of the repacked boxes where you can find 6 Ogors and 2 Lookout Gnoblars for 25£.

Apart from the leader, the Crusher, you can assemble the remaining miniatures in any combination of weapons of your preference.

To be a valid Age of Sigmar unit all models in the unit have to use one single weapon profile however.

At the same cost (25£) you can find also the other 2 boxes, both with 4 models each of Ironguts or Leadbelchers from which you can select one model as the leader option.

Why those two boxes never got repacked with the release of the new army is really weird, but sadly it is a very “GW move”.

Tips on painting a Ogor Mawtribes Warband for Warcry

Do you have some awesome Ogors painted up?

Ogors Mawtribes derive from the old Ogre Kingdoms army of Warhammer Fantasy, and most models have few years on their back so you will find plenty of tutorials online.

To paint the skin Warhamer TV presents two useful videos, one for light tones and one for dark tones.

For the skin you can of course find many videos also using alternative products not from GW. 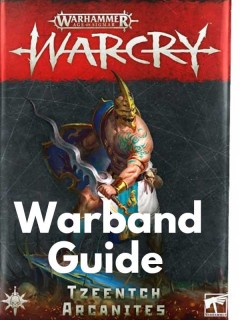 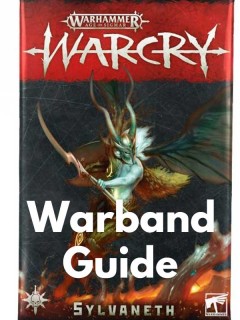