This is a review of the Start Collecting Flesh-Eater Courts:  a perfect starting point for this army of lunatics believing to be noble knights. Including one leader option on foot or on behemoth, an elite unit and a battleline is all that you need to start collecting this crazy army.

Which models are included in the Start Collecting Flesh-Eater Courts Box?

However, the Terrorgheist and the Crypt horrors have different build options.

The Terrorgheist is a huge necrotic flying beast that can be assembled alternatively as a Zombie Dragon. Both options can be ridden by an Abhorrant Ghoul King, your staple as a leader or by a Vampire Lord.

If you assemble it with the Vampire Lord however this behemoth becomes a more suitable unit for the Legions of Nagash or a Soulblight army.

If you choose to not put any knight on your beast, then the Abhorrant Ghoul King can be set up on foot and the mount used as a separate unit.

In general, the Ghoul King on Terrorgheist is a very good option, so if in doubt go with that.

From the Crypt Horrors kit, you can get a variety of units mixing and matching the various components, those have all in common the keyword “Knight” and can be divided in 2 versions: with or without wings.

With wings there are 2 different variants: the Vargheists are the wild vampire usable in a Soulblight or a Legions army while the Crypt Flayers are an extremely useful and powerful flying unit.

The other more ghoulish version is the Crypt Horrors, the elite unit of Flesh-eaters.

The leader of the Horrors and the Flayers can be further customized transforming it into a hero: either the Crypt Haunter Courtier or the Crypt Infernal Courtier.

There’s a catch however: creating either hero would make the rest of the unit of illegal size (3 being the minimum unit size).

To get all possible combinations you would need at least 3 boxes as you can make only one leader from a single box (without extreme kit bashing).

Why not start your crazy undead horde today?

The Crypt Ghouls are your basic infantry and even if you choose an elite army you may want few of them around.

There are different ways to summon them too, so they come handy anyway, even if you do not put them in your army.

The leader of this unit can be set up on a 25mm base for a simple unit leader, or on a 32mm base to become a Crypt Ghast Courtier, another hero option for this army able to bring back slain Ghouls while in range.

Since the unit size is 10, if you choose the leader option you are left with 9 ghouls and you need to find another one to complete the unit.

So many options are available from this box, but not all will make a viable unit in Age of Sigmar so you will need to plan them carefully.

For Legions of Nagash you have: Vampire Lord on Zombie Dragon (440 points) and Prince Vordrhai (a named vampire lord on zombie dragon), both leaders and behemoths, and Vargheists (unit of 3 for 150 point).

Terrorgheist and Zombie Dragon have same points as their Royal counterpart.

The value of the box is not straightforward to calculate as the dragon model can be found only directly via GW for 37.5£, while a box of Crypt Flayers is 30£ for 3.

The Crypt Ghouls however are sold in a box of 20, so double the amount in the Start Collecting box, making the total at 92.5£ but with 10 ghouls more.

If you are starting a Flesh-Eater Courts army you may want at least 2 of these boxes to get both variants of mounted beasts, 20 ghouls and 6 “Knights” to assemble whichever way you prefer.

Considering the entire Flesh-Eater Courts army (meaning all units possilbe to have in the army) is assembled from this box, this is hardly a miss.

How many to buy really depends on how many big beasts you can afford in your army, but you will need many “Knights”. If you specialise in only Ghouls or “Knights” you may want to buy the individual kits separately sooner, but in a mixed army few boxes may help to build up to 2000 points rapidly.

Outside of these boxes there is only the Varghulf Courtier, not really used but a nice model, and the Archregent that was a Carrion Empire exclusive and has not been released individually by GW yet. Keep an eye for it.Order your Start Collecting Flesh-Eater Courts

Also, take note that most of what you get in this box can be used in Warcry, so if you are looking to start a new army and a Warcry warband, this is not a bad pick for you. 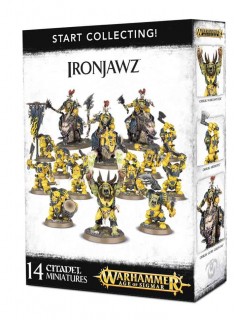 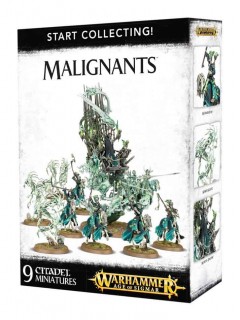 Next
Review of Start Collecting Malignants Box for Age of Sigmar
Comments are closed.