Tzeentch is the Chaos God of magic and manipulation, the Changer of Ways.

His daemons represent this raw energy and maddening affinity with magic, each infused with a glimmer of the god essence. This is a guide for the Tzeentch Daemons Warcry Warband.

Change is coming, will you embrace it leading Tzeentch Daemons to war?

Background and Lore of the Tzeentch Daemons Warband

Tzeentch sits at the centre of the Crystal Labyrinth, an ever-changing fortress impossible to understand by a mortal mind. Natural laws do not apply in the dominion of Tzeentch. From there he sends forwards his legions of Daemons.

Horrors advance launching sorcerous bolts from their fingers and, when struck, split in other lesser horrors spiting their mortal assailant.

Flock of Screamers descend from the skies to cut people with their bladed wings occasionally bracing an opponent with they lamprey-like mouths. Flamers pour from their body mutagenic fire towards their victims.

Tzeentch’s daemonic lieutenants are his Heralds, plotting in the name of their god afoot or on top of burning chariots.

But when Tzeentch requires more attention to a task, will then deploy his greater daemons: the Lords of Change.
But how do they play on the tabletop? Let’s take a look at their fighters and bone-crunching abilities.

Overview and Points for the fighters in the Tzeentch Daemons Warband

The Tzeentch Daemons warband is made from 4 kits with 9 options of which 2 are leaders. 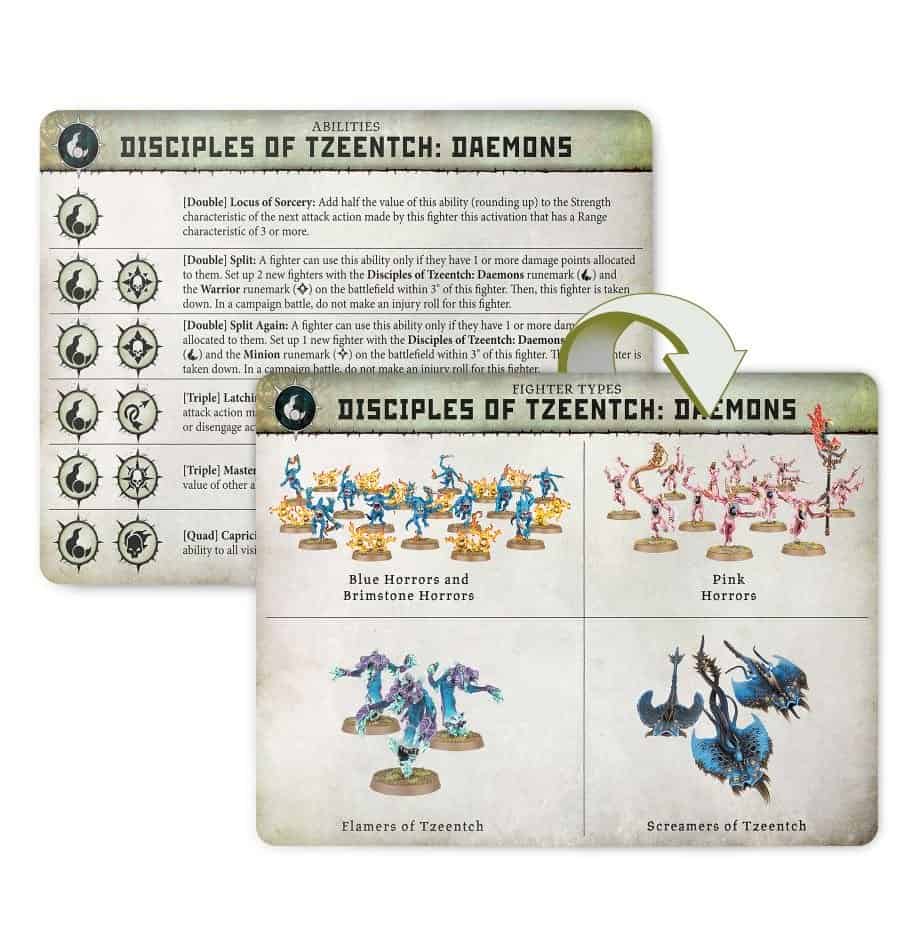 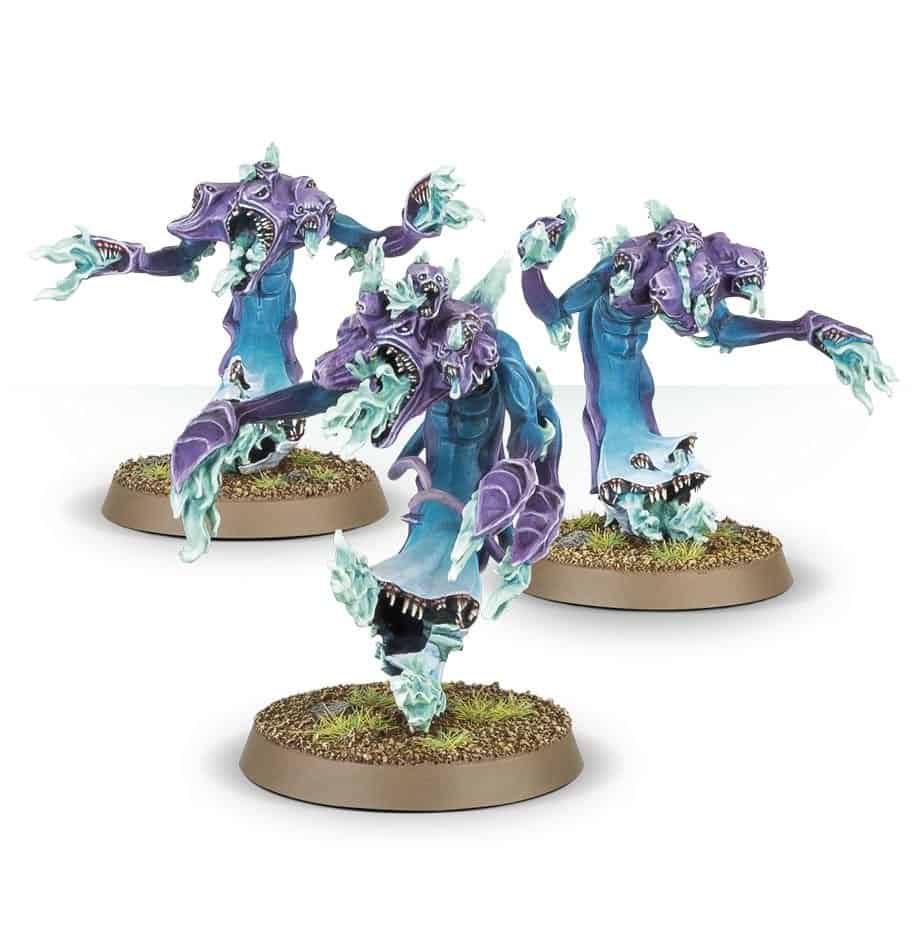 The Flamers of Tzeentch represent two different models that can also be purchased separately. The leader of the unit of Flamers of Tzeentch is called Pyrocaster, while the Exalted Flamer can be found also riding a Burning Chariot (although in this version is not usable in Warcry).

All Flamers share the same ability: Capricious Warpflame. For a Quad they can do up to 6 damage to any enemy fighter within 3”. The range is small but the potential damage really high, although it does cost a Quad and really depends from the ability value too.

The Pyrocaster, as a leader, has access also to the ability Master of Destiny. For a Triple, it allows to add the value of the ability (to a maximum of 6) to any other ability used by a fighter within 3” from the leader.

The only ones from this warband that can be used with are the Locus of Sorcery (to add up to 3 point to the Strength characteristic for Ranged attacks), Latching Bite (an ability usable only by the Screamers) and of course the Capricious Warpflame described above.

In the last case, you would need to have a Triple and a Quad available and have your leader within 6” of a Flamer within 3” of enough enemies to justify the use of 7 dice…

As most Tzeentch units, Flamers have a ranged and a melee attack. The ranged attack has a minimum range of 3” and a maximum of 10” at strength 3.

The Pyrocaster and the Exalted Flamer have 4 attacks each, while the Flamer only 3. The Exalted Flamer does also 1 more damage (2-5) on a critical hit. The melee attack is the same across all 3 units: 2 attacks at strength 3 for 2-4 damage.

With Toughness 3, the number of wounds can make the difference: 25 for a Pyrocaster, 15 for a Flamer and 30 for an Exalted Flamer.

In synthesis the Flamers are a loose cannon, because the Quad is always there lurking when you get too close, and if you don’t get too close, they can hit with 4 (or 3) attacks and critical damage of 4.

The strength is quite low but can be improved for a Double using Locus of Sorcery bringing it to a potential 6 (for the first attack only).

But this cannon is also made of glass with Toughness 3 and no ways to improve it.

In melee they still perform decently but here is the conundrum:

with movement 8” and a range of 10”, do you want to keep your enemies distant but not enough so that you can’t use a well placed Quad while risking to be torn apart if anyone survives or you keep the distance and hope for some critical hits? 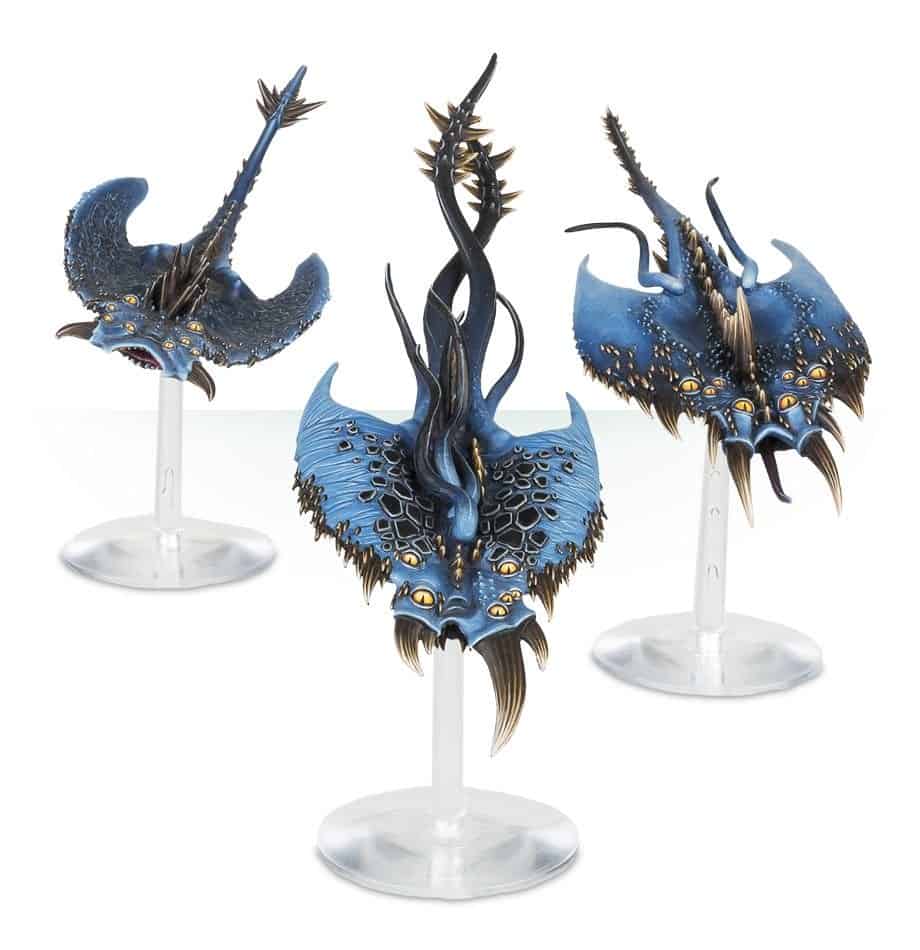 The Screamers are capable Sky-sharks and the only Flying unit in this Warband. With an impressive movement of 12” they can cover great distances in one single round.

Their main ability, Latching Bite, allows them to improve their Strength characteristic (from 4 to a potential 10) for a Triple.

As a downside after using this ability they can’t move or disengage until the end of the turn. With 4 attacks at damage 2-4 they can end up doing some serious damage to mid-tier fighters.

But be careful about the comeback in case they do not kill their opponent: with Toughness 3, their 18 wounds will not last long.

Screamers are melee-only so use them wisely and don’t forget they are perfect to get first to objectives and other strategic points. 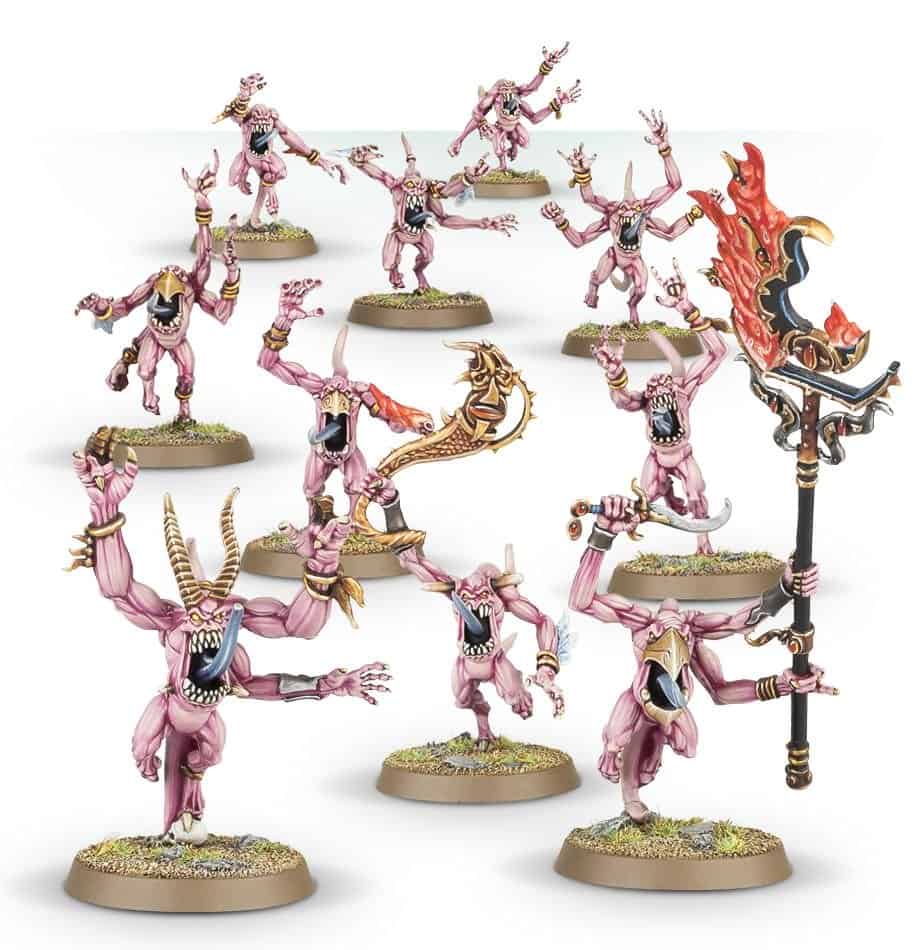 The Horrors of Tzeentch are the most unusual of the Warcry fighters and are very thematic. Pink and Iridescent Horror have access to the Split ability that for a Double allows to replace that fighter with 2 Blue Horrors, while the Blues can be replaced (again for a Double) with a Brimstone Horror.

Attention that to execute the split the fighter needs to be wounded and needs to be done before it gets killed. With Toughness 3 it will not take long for them to go down but the ability to replace them with fully healthy, although less powerful, fighters make them a particular option.

As well as the Flamers, the Horrors also have a ranged attack with 3-10” range at Strength 3 with decreasing damage depending on the Horror, and a melee attack at Strength 3 following the same trend.

The leader, and strongest of the Horrors, is the Iridescent.

As a Leader he has access to Master of Destiny that, although of no use for the other Split abilities, can still be used to support nearby Flamers or Screamers.

As a Horror he can also split in the desperate situation you can afford to lose a leader and replace it with 2 more fighters. With 22 wounds he is the most resilient, his 2 ranged attacks have damage 1-4 and his 4 melee attacks have damage 2-4 making him versatile but not overpowered.

The Pink Horror on the other side has 12 wounds, 2 ranged and 3 melee attacks with damage 1-4 making him an excellent option for a decently low cost (90 points).

The Blue Horror loses wounds (only 8) and damage on critical (1-3) on both weapons for 15 points less.

The Brimstone Horror is the cheapest fighter of this warband.

For 6 wounds and damage 1-2 do not expect much, but at the same time you can get one for free (still using a Double) if a Blue Horror is close to die and it will interfere on the count of models around an objective.

Strategy and Tactics for the Tzeentch Daemons Warband

Tzeentch Daemons is warband which is probably more suited for experienced players.

The fighters all have low Toughness but compensate with a decent ranged firepower and good mobility to keep their opponents at distance.

When grabbing objectives, the Horrors and their ability to split will ruin more than one adversary plan, doubling the fighters around a particular position when on the brink of death.

Useful also to engage other opponents if required and get extra firepower on the table mid-game.

The leader ability is an interesting one: really situational and probably the least used in the various warbands as it requires a lot of dice. Another characteristic of this warband is the low number of attacks available and the low Strength.

You are able to increase one of the two values but not both (the universal ability Onslaught for a Double gives +1 attack for the entire activation).

The damage output is also on average high (2-4) but the absence of heavy hitters will make dispatching the strongest tanks an incredible feat. For this reason, at least one Exalted Flamer should be included in every list. He guarantees a decent damage output at a certain distance, high wounds and a good mobility with its 8” movement.

Movement wise the best units are the Screamers thanks to their flying 12”.

They are also good melee fighters and if they really commit, with a Triple they can ensure to do a decent damage even to the most armoured opponents.

Their ability prevents moving afterwards and is valid only for one attack, so if already engaged you can use your first action to see if the God of Destiny smiles at you, and if not you can then increase your chances using Latching Bite for the second attack.

Where this warband will struggle are the missions in which you have to defend a certain group. Splitting a horror will count as your warrior being taken down, so be ready to play cat and mouse and bombard your enemies with your magic missiles.

Finally, the Flamers can unleash hell if surrounded (and you have a Quad available), but most of the time are better suited to attack from afar.

Pros and Cons of the Tzeentch Daemons Warband

-Can be hard to play for beginners

How to buy a Tzeentch Daemons Warcry Warband

The Tzeentch Deamons warband is almost entirely contained in the Start Collecting! Daemons of Tzeentch box.

While you can find every single other miniature independently in other boxes, for 55£ you will find in the starter box 3 Flamers (one can be assembled as a Pyrocaster), 3 Screamers, 10 Pink Horrors (the leader can act as Iridescent) and the Burning Chariot can be assembled as a Herald on Disc of Tzeentch leaving the Exalted Flamer as a stand-alone to complete your collection.

On top of that, to make use of the Split abilities, you will need a box of Blue Horrors and Brimstone Horrors (22.5£) containing 20 miniatures (10 blue and 10 brimstone), that should be enough for your warband of Daemons.

This is by far the most optimal way of getting your warband together, so we just suggest getting a Starter Set + a box of Blue/Brimstone Horrors and you are ready to crack skulls in Warcry!

Tips on painting a Tzeentch Daemons Warband for Warcry

Do you have some sweet looking Tzeentch Daemons painted up?

I would very much like to display them right here on this page.

All you have to do is send my some files. You can read more about how to make that happen here.

Tzeentch has been out for a long time with his armies for both Warhammer 40K and Age of Sigmar. Daemons in particular are usable in both game systems, therefore there is plenty of guides on how to paint them.

Warhammer community in particular has plenty of tutorials, from the Blue Horrors using contrast or classic method, Pink Horrors and Brimstone Horrors (minute 16.27) to Screamers and Flamers.

There’s plenty of alternative artists online for example this Pink Horror or this using airbrush. 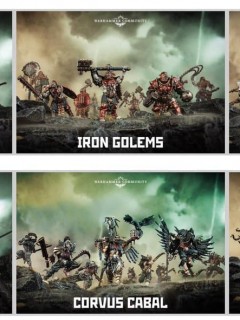 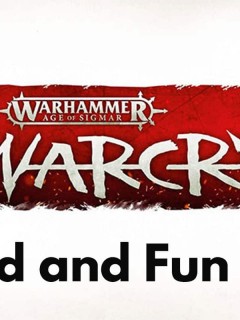 Next
Warcry: Weird and Fun Stats About the Warbands and Fighters
Comments are closed.