Warcry: Weird and Fun Stats About the Warbands and Fighters

You followed the Chaos Gods in the Eightpoints. You challenged them in the name of Gorkamorka, Nagash or any other Order God. You went into Archaon’s dominion just for profits or in search of unimaginable artefacts.

And now you are there wondering which warband can give you the edge against the others in the game of Warcry?

This is a collection of weird and funny stats for Warcry. Which faction can do the most damage with a single fighter? What factions hos the most available different fighters?

All these questions and more will be answered below.

This is a compilation of statistical data considering only the values on the Warcry warband cards (i.e. not considering the abilities or other factors external to the cards).

It’s just a fun exercise to see what characterizes a warband and where the extremes sit. In no shape or form is this data relevant or influenced by the tournament scene (if one even exists for Warcry).

From the statistical analysis, I have also excluded all allies and monsters contained in the Tome of Champions as those can be used across warbands of the same Grand Alliance.

So with these caveats out of the way, let us dive in!

Most represented Grand Alliance in Warcry

With 18 warbands (including the Scions of Flame yet to be released) Chaos is definitely taking the larger spot.

They already had a huge head start with 6 warbands dedicated to the first season of Warcry representing Chaos in the different realms and they now further increased their gap with two warbands for each main Chaos God (daemons and mortals) with only Slaanesh left with one single warband (Slaanesh mortals, where art thou?).

At the second place we have Order with 9 warbands, of which well 3 are Stormcasts representing the main waves released in Age of Sigmar (Warriors in 2015, Vanguard in 2017 and Sacrosanct in 2018).

Order is also the only grand alliance with a faction whose cards were never printed outside of White Dwarf magazine (Fyreslayers in issue 451). Weird, right?

The third place is taken by both Death and Destruction with 4 warbands each representing all major factions available in Age of Sigmar.

Overall, no big surprises. Grand Alliances with low amount of factions fall to the bottom.

Factions in Warcry with the most models

Stormcast Eternals with 3 warbands represented were highly likely to get the hotspot, but in this particular ranking the Warrior chamber alone takes the first spot with 30 different models in the game!

At the second place we have the Kharadron Overlords with 23, representing the different weapon load-outs available to the main infantry guys (Arkanaut Company, Grundstok Thunderers and Skyriggers).

At the third place with 20 models could not be any other than the Skaven, one of the richest range of miniatures available for Age of Sigmar, with 6 different boxes from which to choose miniatures.

Factions in Warcry with the most ranged weapon options

Out of 35 warbands, 23 have some sort of double profile allowing a ranged attack and a melee attack.

The winner in this special category cannot be other than the Kharadron Overlords with 21 out of 23 models providing a ranged attack in addition to a melee option. Only 1 model (the Skypike) has one single weapon profile with a range of 2”, everyone else has either 2 profiles or, like the Aetheric Fumigator, one single profile but 6” range.

The second place by number of models would go to the Warrior Chamber of the Stormcast with 12 models, but since they represent only 40% of their total, the second warband by ranged options are the Daemons of Tzeentch of which the only model out of 8 to not have a double profile is the Screamer (the flying shark).

At the third place we have the Stormcast Vanguard Chamber with 6 models out of 8 providing a double profile.

Deadliest ranged weapon in all of Warcry

There are 19 different models, distributed in 7 different warbands, with a maximum range of 20”.

Of those special mention goes to the Longstrike Crossbow worn by the Vanguard-Raptors of the Stormcast Vanguard, with a critical damage of 10 but one single shot.

To see the potential damage, I have multiplied the maximum damage possible by number of attacks and the Judicator with Shockbolt Bow of the Warrior Chamber has a potential of 18 damage on his 3 hits. And with Strength 5 wins also the chances of the minimum damage (6).

Other good hitters with a potential damage of 15 are the Blood Stalker Krone (Daughters of Khaine), the Kurnoth Huntmaster with Greatbow (Sylvaneth) and the Tzaangor Skyfire Aviarch (Tzeentch).

If we check the chances of maximum damage without critical hits, other than the aforementioned Judicator, with 6 damage at Strength 5 we have also the Drill Launcher wore by Skywardens and Endrinriggers (Kharadron Overlords).

Factions with the most leader options in Warcry

All new Chaos warbands are limited to one single leader option, but the expansions have almost limitless choices.

The top warband by number of options available is the Warrior Chamber of the Stormcast thanks to the 4 sets included in the list having the leader available with different loadouts.

The Paladin box is one of the 5 boxes with most leader choices to assemble: Decimator, Retributor or Protector Prime. The other boxes being the Kurnoth Hunters, the Hearthguard Berzerkers, Skyriggers, Savage Orruks and Tzaangor Enlightened.

At 6 options for leaders, you have also a wide choice in Daughters of Khaine, Sylvaneth and Beasts of Chaos (at the time of writing the Castigator-Prime of the Sacrosant Chamber is not yet a Leader, pending errata that would bring this warband to 6 as well).

Most total points if you fielded each unique fighter in each warband?

While most original Chaos warbands are 1000 points or less (having only 7 cards on average), the new warbands can get to crazy amount of points.

Not surprisingly the Warrior Chamber with 30 really expensive cards would allow you to field 6640-point warband with all individual fighters!

With 221 average points per model the Warrior Chamber is also the most expensive on average, followed closely by the Ogor Mawtribes with 220 and the Sacrosant Chamber with 213.

The most expensive Chaos warband on average would be Khorne Daemons with 176 points and for Death would be Flesh-Eater Courts with 193.

The cheapest and the most expensive fighters in Warcry

With 35 points the Giant Rats of the Skaven warband is by far the cheapest unit in the game!

At 45 we have the Aetherwings of the Warrior Chamber, the Squig Herder and the Stabba with Barbed Net of the Gloomspite Gitz and the Lookout Gnoblar of the Ogor Mawtribes.

At 300 follows the Crypt Infernal of the Flesh-Eater Courts and the Prosecutor-Prime with Javelin and Shield.

The most expensive non-leader unit is the Stormfiend with Ratling Cannons at 285 points.

The highest damage unit in all of Warcry!

We conclude our list of statistics by mentioning the biggest hitters of the game (excluding allies, monsters and that monster(!) of an ally that is Gotrek).

To see the potential damage, I have multiplied the critical hit damage for the number of attacks and the clear winner is here once again Skaven with 2 Stormfiends!

The Doomflayer Gauntlet provides 5 attacks for 8 damage maximum, while the Shock Gauntlet has 4 attacks but for 10 damage, 10 being also the maximum critical damage available in the normal units.

With Strength 4 however may not punch that hard the tougher enemies, so moving to Strength 5 the Ogor Crusher and the Stormfiend with Grinderfists can provide 16 damage per action.

Finally, with Strength 6, the highest available, and 15 damage with his 3 attacks and damage 5-10 we find the Irongut Gutlord. 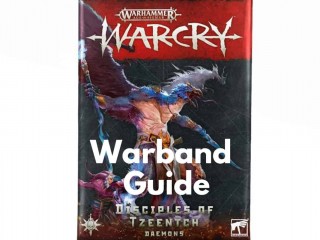 Best Painting Handle and Miniature Holder for your Hobby
Read Next Post →
Comments are closed.