Curious to see what’s on the horizon for the Warhammer 40,000 universe?

Look no further: In this article, we keep track of everything that’s been announced, but not released for the Warhammer 40,000 tabletop wargame and it’s related boxed games such as Necromunda, Aeronautica Imperialis, board games and even Horus Heresy releases.

We hope you enjoy this view of Warhammer 40K upcoming releases! All is sourced from the Warhammer Community and Games Workshop.

The Adeptus Mechanicus are getting a codex for 9th edition, accompanied by the following releases:

Revealed at the Faith & Damnation preview seminar on March 20, 2021, Codex: Adeptus Mechanicus will update the army to the 9th edition of 40k.

A non-Tech Priest HQ at last, this Skitarii Marshall was revealed at the Faith & Damnation seminar as well.

The new 9th edition Codex: Adepta Sororitas was announced on May 4 during the Warhammer Fest Online 2021. The codex will contain updated datasheets for new and existing units, as well as all the 9th edition goodies such as Crusade rules, new secondary objectives and much more.

Aestred Thurga, a Reliquant-At-Arms character for the Sisters of Battle with an amazingly detailed banner, was revealed in the Battle Sister Bulletin on April 26, 2021. Her companion Agathae Dolan was revealed at the Warhammer Fest Online 2021 on May 4.

The Celestian Sacresanct is part of a new melee-focused infantry unit for the Sisters of Battle and was revealed in the Battle Sister Bulletin on April 12, 2021. At Warhammer Fest on May 4, 2021, it was revealed that it was a 5-woman squad with two weapon options: halberds or maces.

The Palatine was originally released as a part of the dual-army box set Piety & Pain, but is now on its way alongside the new codex, as announced at Warhammer Fest Online 2021 on May 4, 2021.

The Dogmata is the Adepta Sororitas equivalent of a Space Marines Chaplain (she boosts fighting power of nearby units and is a close combat character) and was revealed at New Model Monday on March 29, 2021.

Revealed at the Faith & Damnation preview seminar March 20, 2021, the Castigator is a new tank for the Adepta Sororitas.

This Paragon Warsuit is part of a new walker elite unit for the Sisters of Battle revealed at the The Dead & The Divine preview seminar on January 23, 2021.

The Beast Snagga Orks Army Set was revealed on May 7, 2021 during the Warhammer Fest Online 2021. It contains 26 miniatures as well as the new Codex: Orks. Since all of these will apparently be available separately later, we’ll list them as separate entries below for those who haven’t already been revealed.

This new Codex: Orks for 40k 9th edition will make its first appearance in the Beast Snagga Army Set, and then released separately with a different cover on a later date. In the Warhammer Fest Online 2021 preview stream on May 7, the codex was described as a complete rework of the Ork army with support for many different playstyles.

The Nob on Smasha Squig is a new character from the Beast Snagga Orks Army set.

Zodgrod Wortsnagga is a character from the Beast Snagga Orks Army Set . He is an update of an old character who dates back to the second edition of Warhammer 40K (we’re at 9th edition now), and he is a runt herd who can improve a unit of Gretchin, which does seem a bit odd since he comes in a box with no Gretchin units (there’s a few of them in the Squighog Boyz unit, but they don’t seem to be a separate squad).

The Warboss in Mega Armour is a new character for the Orks, and he was revealed during Warhammer Fest Online 2021 on May 7, 2021.

The Painboss is a new Ork character revealed in an Ere We Go article on May 3, 2021. He appears to be especially good at fixing up and improving other orks, and with his bionic legs, he can even keep up with the new Squighog Boyz. He also come with some “augmented” gretchin, as you can see in the image above.

This model from the new Beast Snagga Boyz kit was revealed in a ‘Ere We Go article on April 19, 2021 as one of the first new Ork Boyz models in a long time.

Revealed at the Faith & Damnation preview seminar on March 20, 2021, the squig-riding Squighog Boyz are an upcoming new cavalry (yup!) unit for the Orks. An additional model from the unit (see below) was revealed in the first ‘Ere We Go article on April 5, 2021.

First released in the Kill Team: Pariah Nexus box set, the Space Marines Heavy Intercessors and Necron Flayed Ones were revealed to be on their way as separate boxes in an article on March 12, 2021.

The Cadian Shock Troops Upgrade Pack was revealed during Warhammer Fest Online 2021 on May 7, 2021. It upgrades the current Cadian Shock Troops kit with all of their available weapon options (formerly only available in the Cadian Command Squad kit) and a selection of heads to represent a greater variety in ethnicity and gender for the Astra Militarum.

Gaunt’s Ghosts, a crew of Astra Militarum specialists of Black Library fame, were revealed as a brand new plastic kit usable in Astra Militarum armies in Warhammer 40,000 on May 5, 2021.

The upcoming campaign book War Zone Charadon Act II: The Book of Fire continues the story from The Book of Rust, but adds Be’Lakor and the Adepta Sororitas to the mix. It was revealed on May 4, 2021, during the Warhammer Fest Online 2021.

This new scenery set was revealed at Warhammer Fest Online 2021 on May 4, 2021, and contains scenery and a battle board suitable for games of Warhammer 40,000 at what seems to be a Combat Patrol level.

Maloghurst the Twisted is a new Sons of Horus character model revealed in a Legion Dispatch article on April 15, 2021. He will be released as a resin sculpt by Forge World.

Lady Credo is a Rebel Lord for Necromunda, and she was revealed in an Underhive Informat article on May 11, 2021. The rules for her are already in the Book of Judgment for the game, so you can start planning for how you’ll use her in your gangs now.

A new gang book for House Delaque, House of Shadows, was announced on May 6, 2021 during Warhammer Fest Online 2021. Like the previous “House of” books, it will contain everything you need to play the gang, including tons of new lore, fighters, skills and equipment.

This new expansion box for House Delaque was revealed at Warhammer Fest Online 2021 on May 6, 2021, and is a new multi-part plastic kit with new Champions and specialists that will come out alongside the House of Shadows.

Necromunda: Hive War, the new starter set for Necromunda, was revealed at the Faith & Damnation preview seminar on March 20, 2021, contains an Escher gang, a Delaque gang, scenery, a rulebook and everything else you need to start playing the game.

The Escher Weapons & Upgrades Pack was revealed in the Sunday Preview on May 2, 2021, and contains 60 parts you can combine with an Escher Gang kit for some brand new weapons and head options – in plastic!

The Goliath Weapons & Upgrades Pack contains 60 parts you can combine with a Goliath Gang kit for some nice new weapons and head options in plastic. It was revealed in the Sunday Preview on May 2, 2021.

The House of Faith book, which contains rules for Cawdor and Redemptionist gangs, was revealed at the Faith & Damnation preview seminar on March 20, 2021.

The Redemptionists are a new gang/an upgrade for the Cawdor Gang (you can play them combined or separately) that was fully revealed at the Faith & Damnation preview seminar on March 20, 2021 after having been partially revealed at the New Model Monday earlier that week.

The Necromunda Underhive Propaganda Transfer Sheet was revealed at the Sunday Preview on May 2, 2021 and contains 499 (!) new transfers to put on your Necromunda scenery.

The upcoming Wrath of Angels box set was announced on May 6, 2021 during Warhammer Fest Online 2021. It contains everything you need to play the game, including planes from two new factions: Craftworld Aeldari and the Space Marines.

This Thunderhawk for the Adeptus Astartes/Space Marines faction in Aeronautica Imperialis was announced during Warhammer Fest Online 2021 on May 6, 2021.

The Marauder Colossus is a new bomber for the Imperial Navy revealed in a Flight Plan article on December 15, 2020. it will be a resin model released by Forge World

These Remora Drones for the T’au Air Caste Fleet were revealed in a Flight Plan article on January 18, 2021. They will be released as resin models by Forge World.

This upcoming board game using the basic units from the 40k 9th edition starter set was revealed in a Warhammer Community Article on February 3, 2021.

Space Marine Adventures: Doomsday Countdown is an upcoming board game revealed in a Warhammer Community article on February 3, 2021. It uses a squad of Space Marine Primaris Intercessors and the Cultists of the Abyss from Blackstone Fortress as its game pieces. 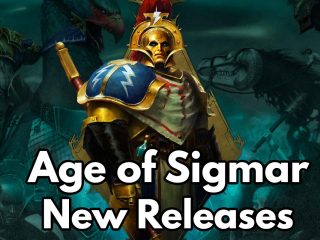 Comparing Warhammer 40.000 vs Age of Sigmar
Read Next Post →
Comments are closed.