I use movement trays all the time for my Warhammer armies. Also, I am actually a bit of a slow player (I think too much about what to do).

Because of this, I need ALL the help I can get when it comes to speeding up my play on the tabletop.

This is why I almost always use movement trays when playing AoS or 40k.

I have used a variety of all the different options on the market and I have finally settled on what I think are the best movement trays help me with speed and making playing less cumbersome.

The TL;DR version: the MiniMag Tray is the best movement trays you get can

If you do not care to read more than a few sentences, here is the answer straight away:

The best movement trays for Warhammer Age of Sigmar and 40k is the MiniMag Trays.

The rest of the post will be me going through the various available movement trays and via that explaining why I think MiniMag Tray solves most, if not all, of the problems with the different options on the market.

Sedge, the gamer who makes the Minimag Trays, was kind enough to send me a free sample of his trays. I contacted him because it looked like it they were the perfect answer to my movement tray problem.

I have not paid for them, but after having used them I am convinced that I need to change fully away from the other options I have used.

I am not receiving any commission or payment from Sedge. I just think he has a product that solves my problems as a gamer, so I want more people to know about that solution. 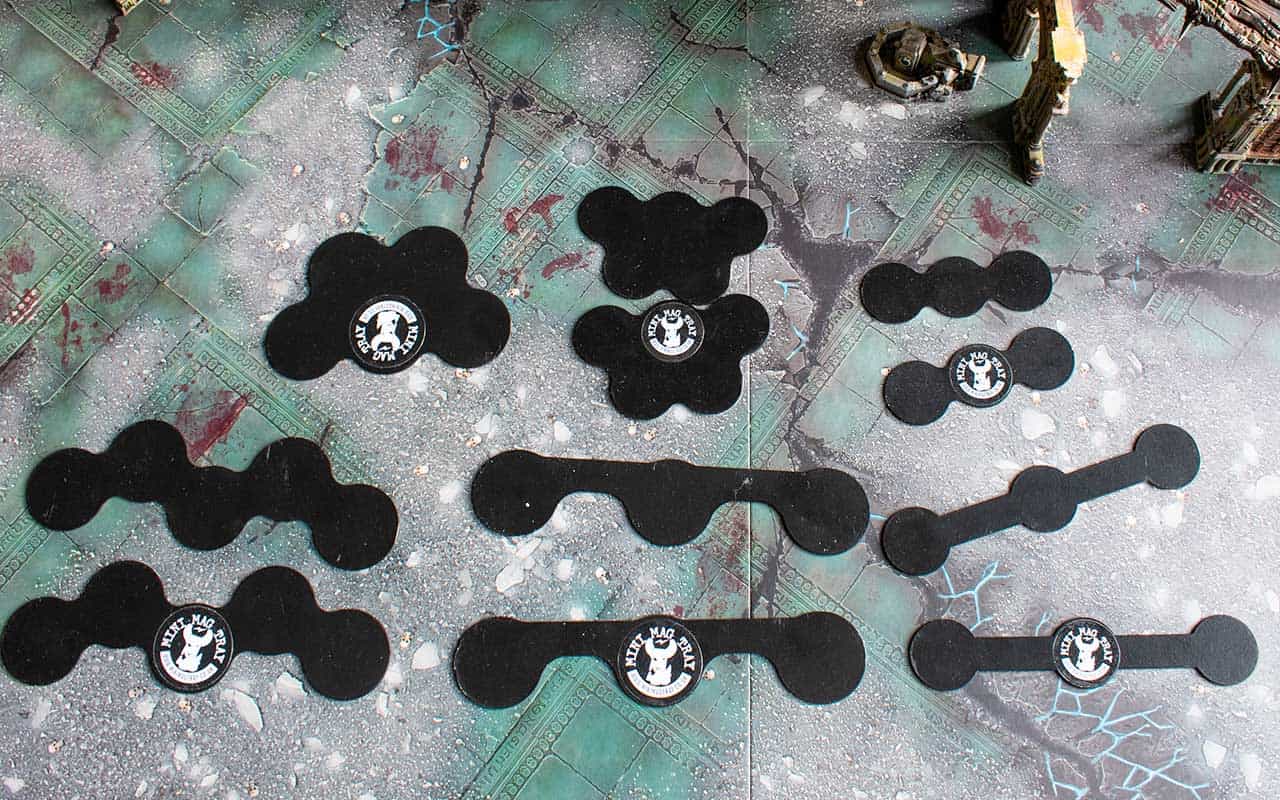 Check out all the options from Minimag Tray

MDF movement trays and why they fail 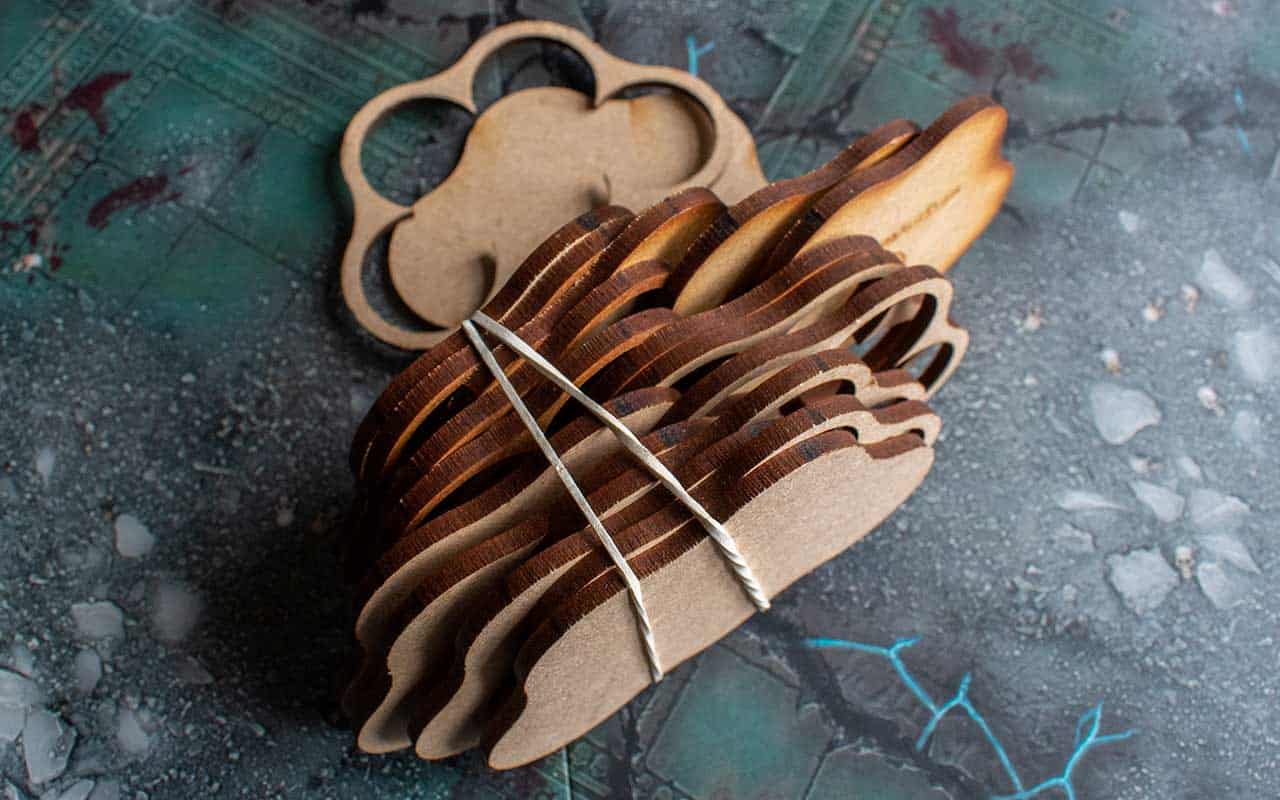 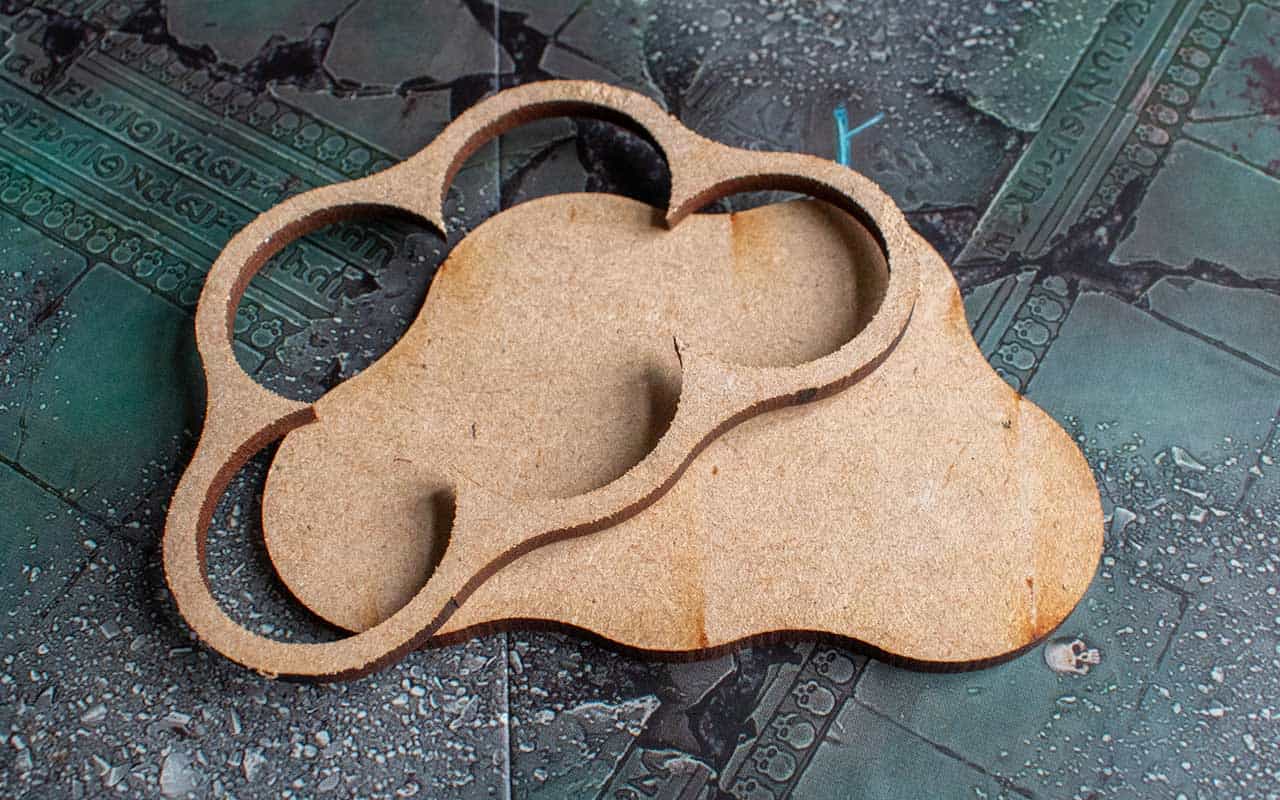 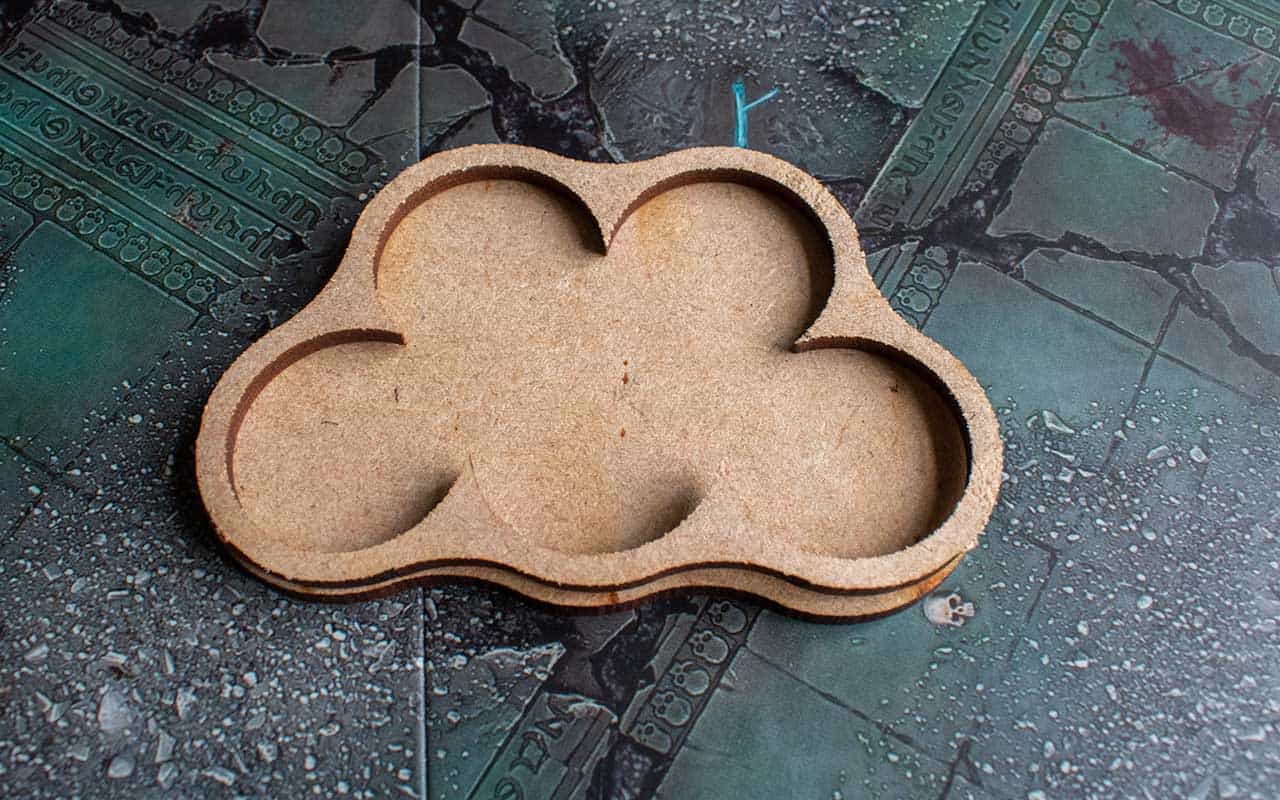 An option that I have used for quite a while is various MDF movement trays.

If you look around tournaments and games, this is easily the most common option to use right now.

MDF trays are great because

But MDF trays also has a ton of flaws:

The rims are in the way of the game

The MDF movement trays have a small rim around the edge.

This means when you shove those badbois on top into combat, they are actually not in base to base contact because of the rim.

This is why most people will move their minis of the base once they get into combat. But that sorts of defeat the purpose of the trays or at least makes them less useful.

So the MDF movement trays are good for setting up and moving about, but after about turn 1 and 2 they tend to get discarded.

Another solution is to ignore the rim and just say that the models “counts as” being in base to base contact.

So you end up with either taking the minis out of the trays or playing that the unit counts as being placed in base contact (which in turn gets annoying to play with and against).

Not really that ideal… 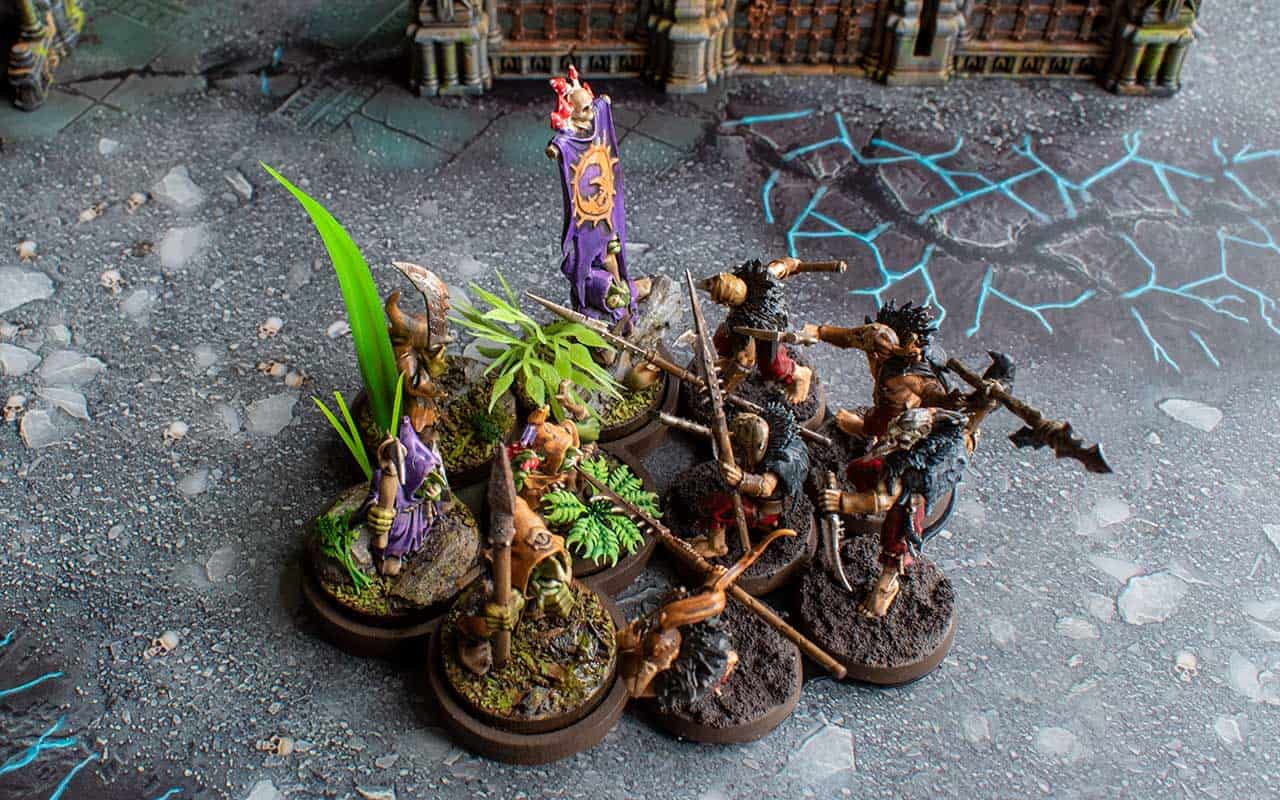 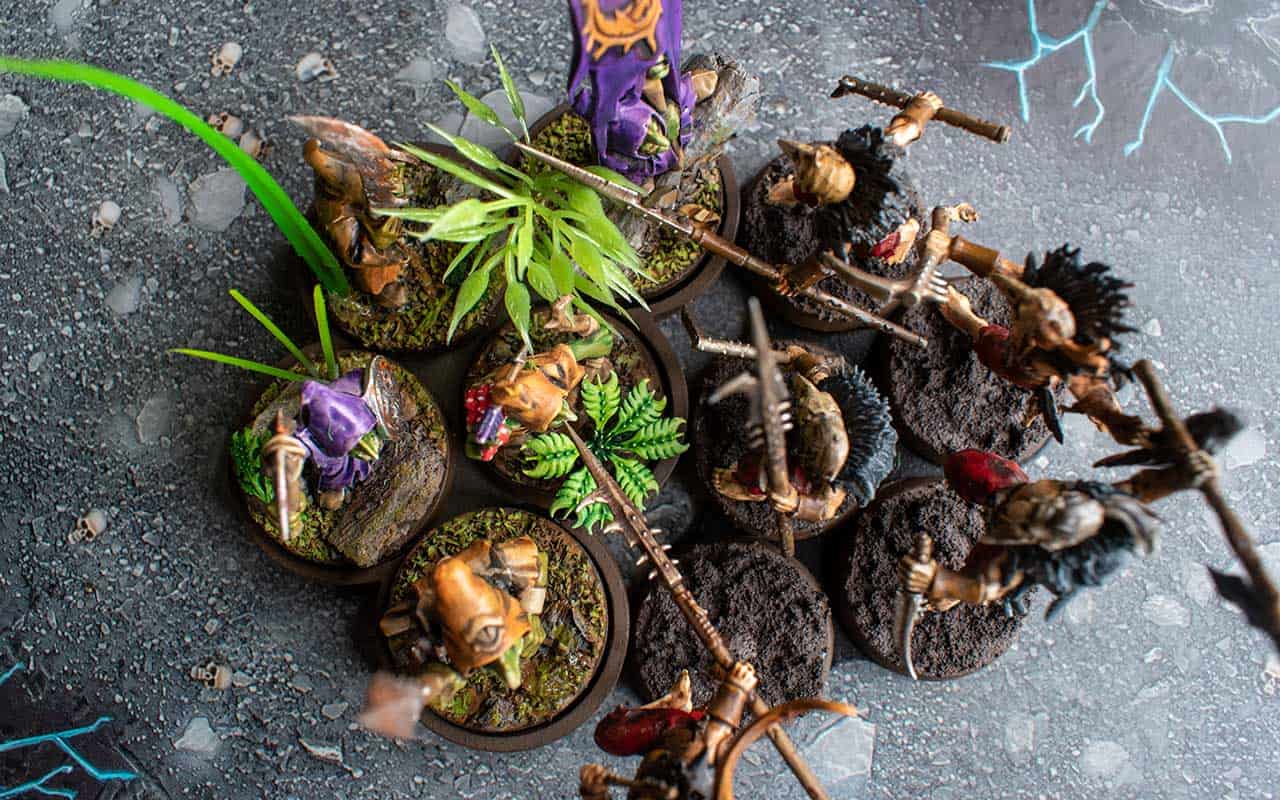 Above you can see the rim of an MDF base keeping the goblins from getting into actually base contact with the bird bois.

The 25mm bases are shorter than the attack range of 1″, but because of the rim on the MDF base the goblins in the back row are now more than 1″ away.

This is less important in 40k as the rules are different for close combat, but in AoS it makes quite a bit of difference.

The MDF bases are visually jaring

The rims around the trays mostly come with the classic brown MDF colour. Once you have painted up your beautifully painted army with bases and everything, it totally wrecks to look once you put them on the MDF bases.

Just look at the difference between a painted MDF tray and a non-pained tray: 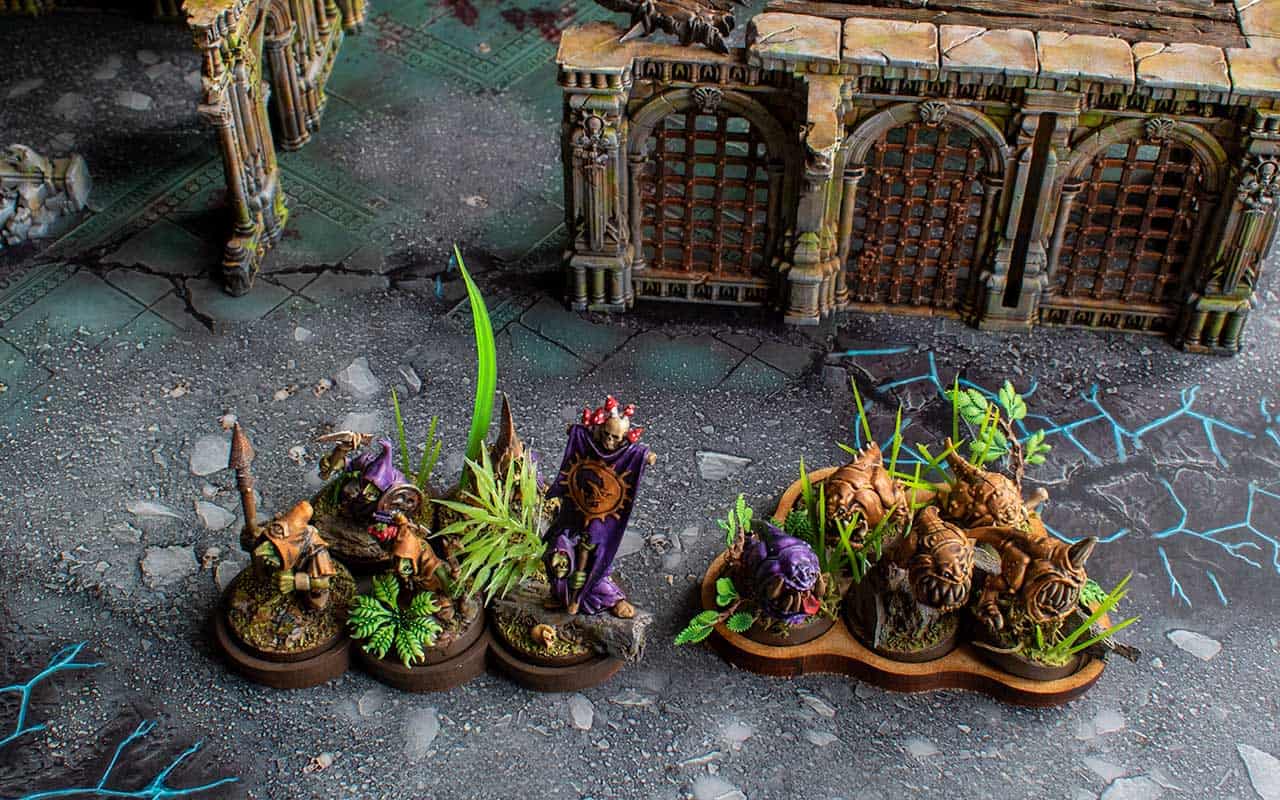 For me, the brown MDF is incredibly ugly. It helps once you get some paint on those rims, but it still does not look as great as without the MDF base.

So not only do I have to glue the rim to the MDF base, but I also have to paint it.

And if you have painted MDF before you know how much paint it will soak unless you prime it. So now you also need to prime that sucker.

And to make the trays suit my taste completely I need to have trays with colours matching my specific army – meaning I need multiple trays instead of just enough to play with various 2k armies.

If you go with some black plastic instead the problem is less apparent and there is no glue involved.

And while I am ranting about the rims, the MDF is also quite thick making it look like the minis are standing on some kind of platform.

Just too many problems visually.

The MDF material is not helping you in anyway

I like to run my minis magnetized. It helps with transportation and the quickness of setup when I game.

To speed things up I need to have my army be transported on their movement trays (if not, I have to waste time on that once I get to the game).

For my Gloomspite Gitz army I have converted my MDF trays to be able to do that, but it requires quite a lot of work.

This is working, but a pain to assemble (not to mention the extra cost!).

Recently I have also found a new problem with the MDF rims.

If you take a 25mm GW base and measure it you, will notice that it is actually a bit shy of 25mm.

Some manufacturers make their movement trays to fit with the GW bases but not to fit with other MDF 25mm bases which are actually 25mm.

The result? I ordered quite a lot of movement trays that my miniatures will simply not fit into.

Maybe it is a case of the MDF warping slightly at some point in the process.

Also, I put quite a lot of junk on my bases. When trying to fit the minis into the MDF rims, especially if they are warped in some way, it is a complete pain to get them all in.

All in all not the best experience.

Above: me trying to insert a 25mm MDF base into a 25mm MDF movement tray with no success. The “smaller” 25mm GW base on the squig fits fine.

A quick sample of various places that make MDF or similar movement trays:

You can also get the bases in various other materials (laser cut and such).

Some of them go some way of getting around the problems of MDF bases, but most of the issues still arise.

How Minimag Tray solves (most) of these problems 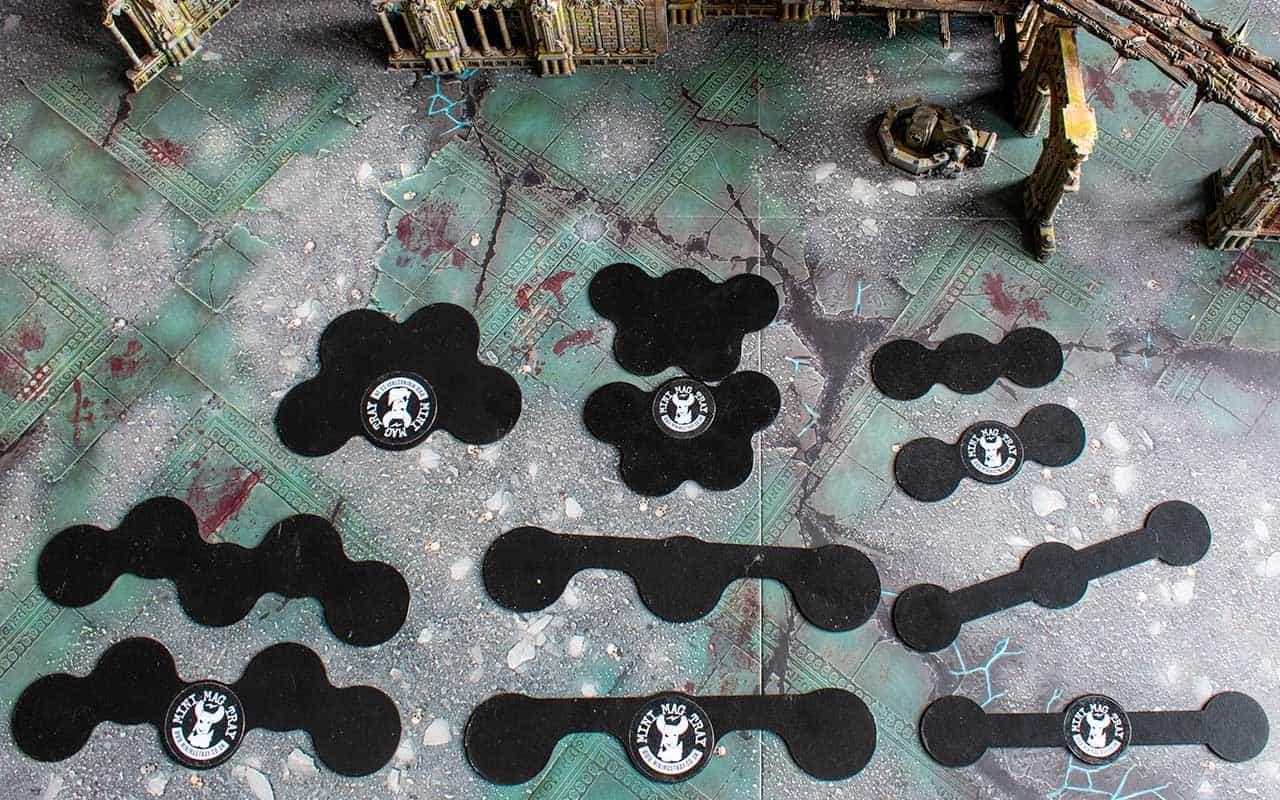 MiniMag Trays are designed to solve the problems of the normal mdf trays and add some more nify features.

They are made by a gamer just like you and me, simply because he was tired of those exact problems listed above with the MDF and plastic options.

You can feel and see in the design that these were made by someone who actually plays Warhammer.

Quite simply, the Minimag trays are very thin metal sheets cut precisely the right way for the bases, movement and combat used in Age of Sigmar.

You miniatures need to be magnetized in some way to use it, as it is just flat metal sheets without any rim.

But once you got some magnets on your models (and they are included with the movement trays) it is a joy to use.

The Minimag trays great because:

Let us look at some images:

(note: the Minimag sticker is only on one side the sheets and can easily be taken off).

I used this picture earlier to show how the rim of the MDF bases can get in the way.

Well, the Corvus Cabal on the right are actually also on a movement tray. But it is the much more streamlined metal sheet tray.

You can see the black show through very slightly on the top right model. But overall, pretty much not visible so not messing up the scheme here. 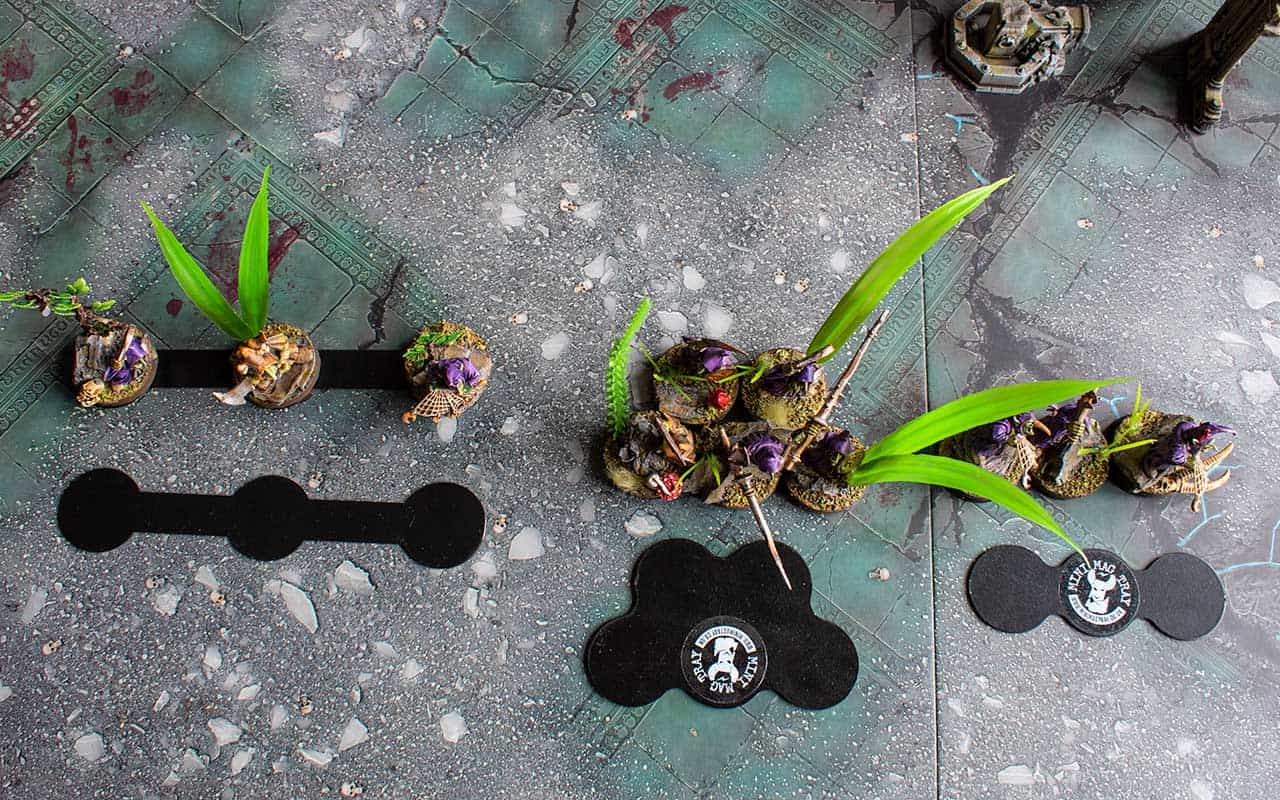 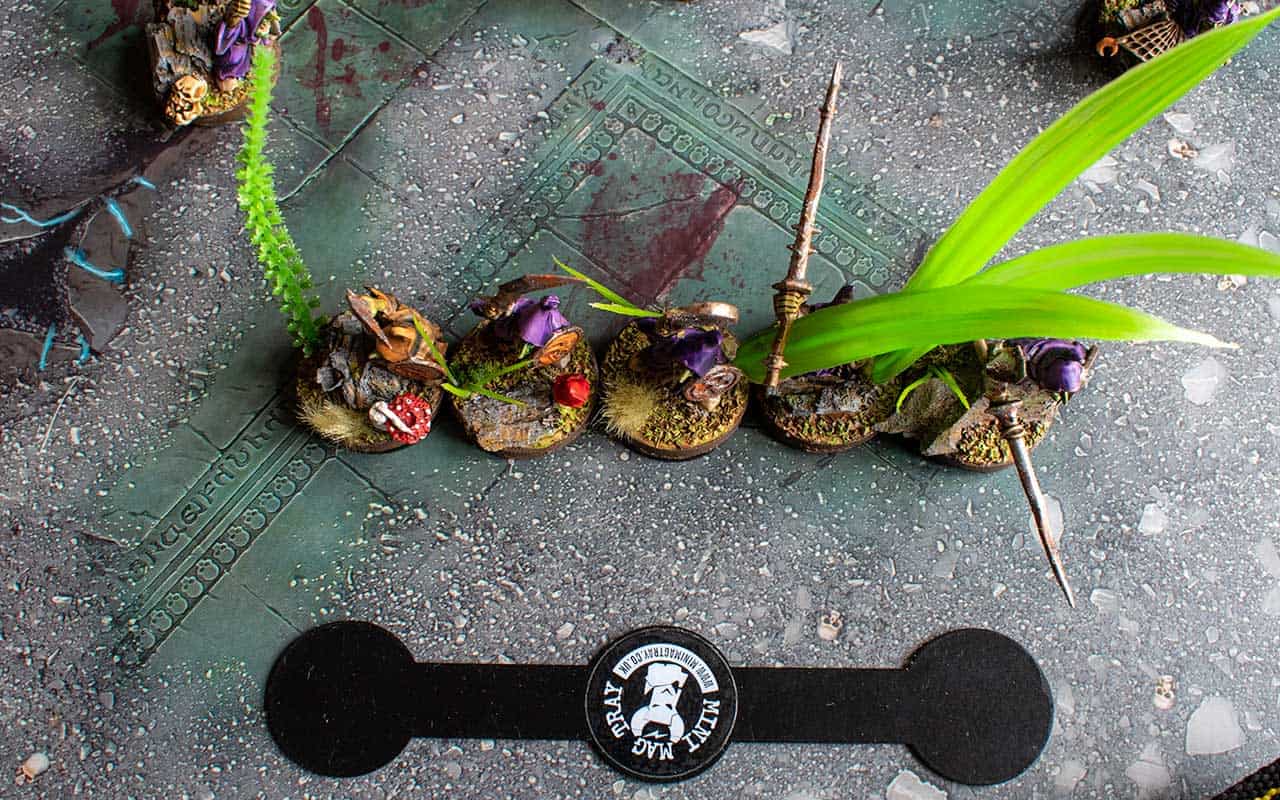 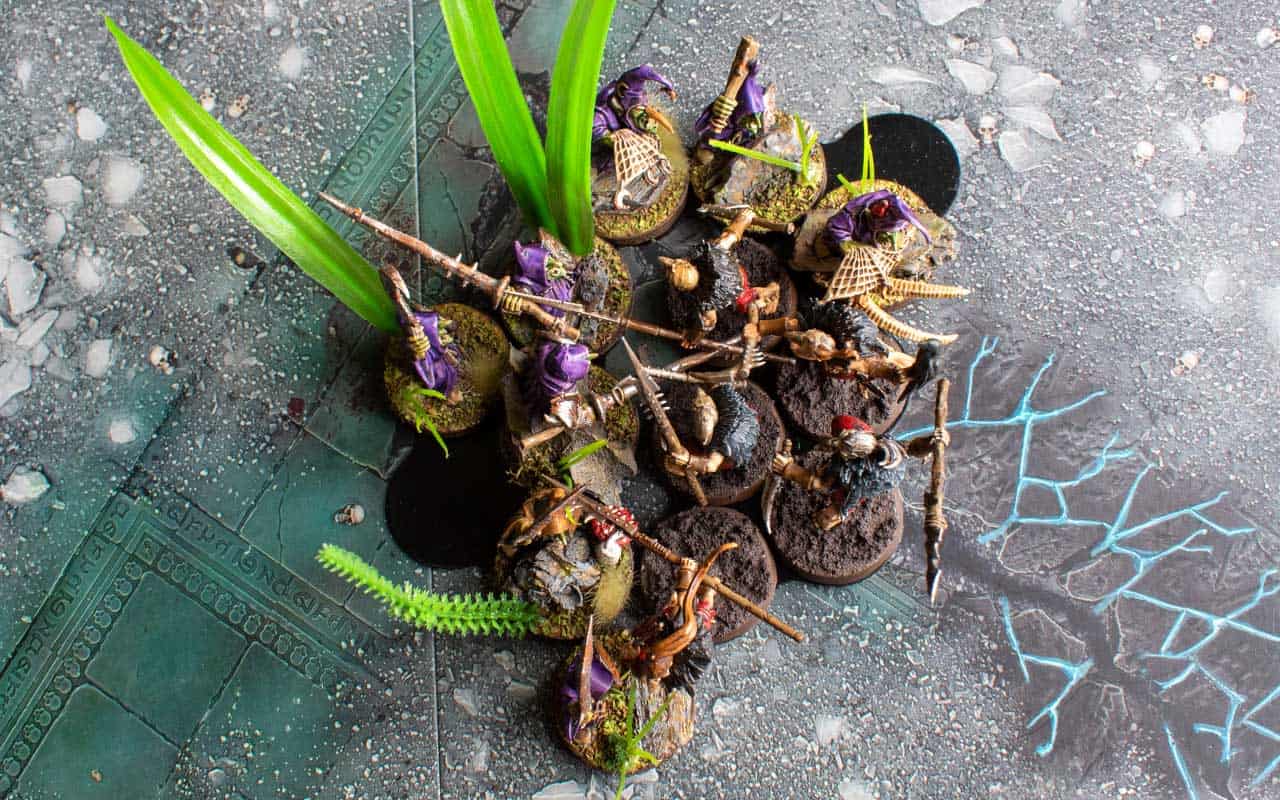 In order to transport my army on the MiniMag Trays I have stuck a magnet sheet underneath it.

This works great, but it takes some time to do manually. If one of the sides could be magnetic from the get go, it would be even easier for me.

There are already quite a lot of different options. I need to play around with the trays in combat for some time before I know the best way of using them for combat.

Some of the options or 2 and 3 man closed formations, which looks really good for maximizing models in combat.

This will go a long way of making the trays usable in combat, which the normal cload formation is really poor at.

Some mentioned it would be easy to make your own metal movement trays.

While that might be a great option for some, it is really not for me. To much work and too many tools that I do not have access to.

All in all the MiniMag Trays just solves SO many of my problems on the tabletop.

With these trays I can transport my army, set it up and play with it in the fastest and most efficient way possible.

This is why I think the Minimag Trays are the best movement trays for Warhammer.

Go get your own Minimag trays!

You can find all of my gear recommendations here

Support us on Patreon

You can find our Patreon here