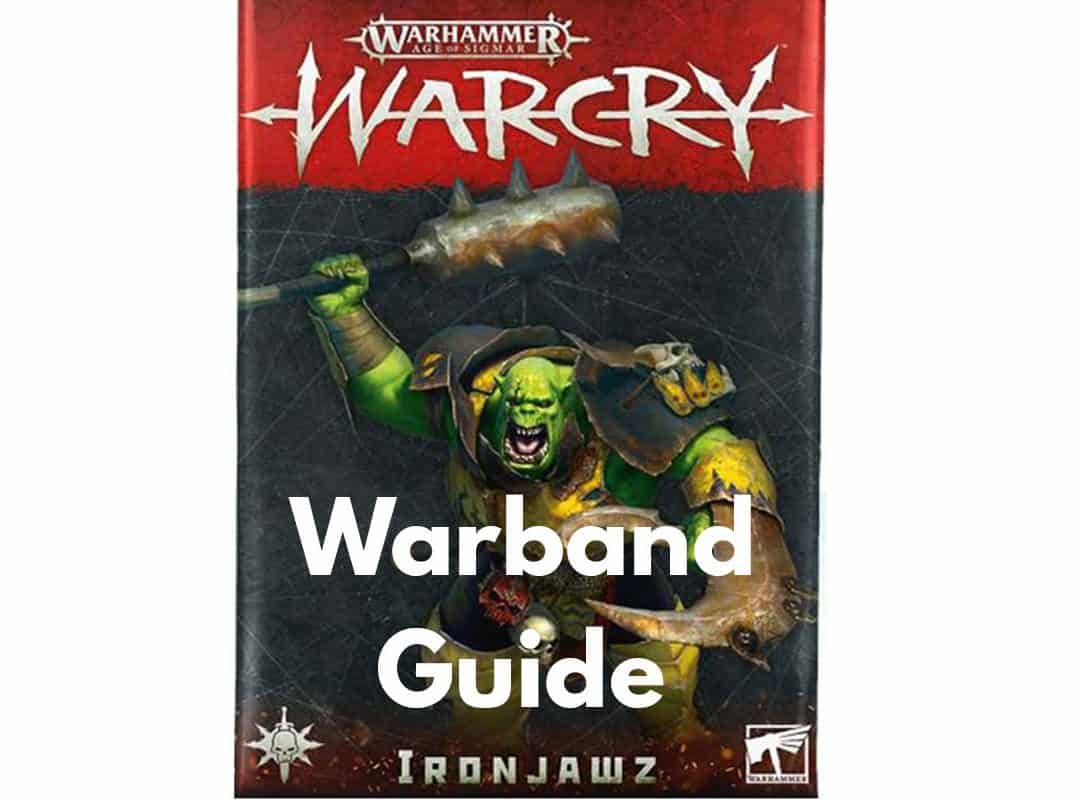 The Ironjawz are a warband tough enough to eat rusty nails for breakfast without any milk. Unfortunately for their opponents, rusty nails are a rare commodity compared to the flesh of their enemies.

The Ironjawz are what every orruk dreams to be.  If Sauron had an army of these melee powerhouses then maybe a couple of hobbits wouldn’t have ruined his plan to conquer Middle Earth.

Make no mistake these Orcs are brutal and direct. While other warbands will jump gracefully between terrain and plot careful ambushes the Ironjawz understand that the best method of winning is by “bashin’ eadz until dey are dead.”

If you’re mainly interested in the bashing and killing of your enemies then this could be the warband for you. It’s best thought of as a casual Warband because frankly as they stand, you won’t win many objective games but you’ll have a lot fun playing them.

Background and Lore of the Ironjawz Warband

Native to the Realm of Beasts, Ghur, Ironjawz are the greatest the Orruk race has to offer.

The largest and most imposing of the species possessing not only a bestial instinct but a comparatively advanced mind (by Orruk standards) capable of creating impregnable armour.

This armour is not quite carefully forged. In fact, it is actually mostly reclaimed metal battered directly (and sometimes hammered into) the Orruk’s flesh.

While nowhere near up to par with Duardin smithing, or even to the standards of the Free Guilds, it is surprisingly efficient and offers a vast range of movement and sharp edges perfect for cutting your prey.

Don’t mistake their equipment for the trappings of civilizations however, Ironjawz don’t even have a word for civilization.

The closest word they have for this is Prey. Ironjawz don’t make cities or even bother to fortify existing structures after all even the best structures and defence fail to protect their prey so what good are they?

Better to live as a wandering horde and dominate everything that crosses their path.

For Orruks this means being beaten down and forced to assimilate into the greater horde. For everyone else this means a brutal death.

Even Archaon’s mightiest legions have felt the Ironjawz might, notably at the Manticore Gate to the Allpoints, were on separate occasions Ironjawz breached the fortifications and slaughtered the inhabitants for no other reason than to deface a statue of Archaon.

Overview and Points for the Fighters in the Ironjawz Warband 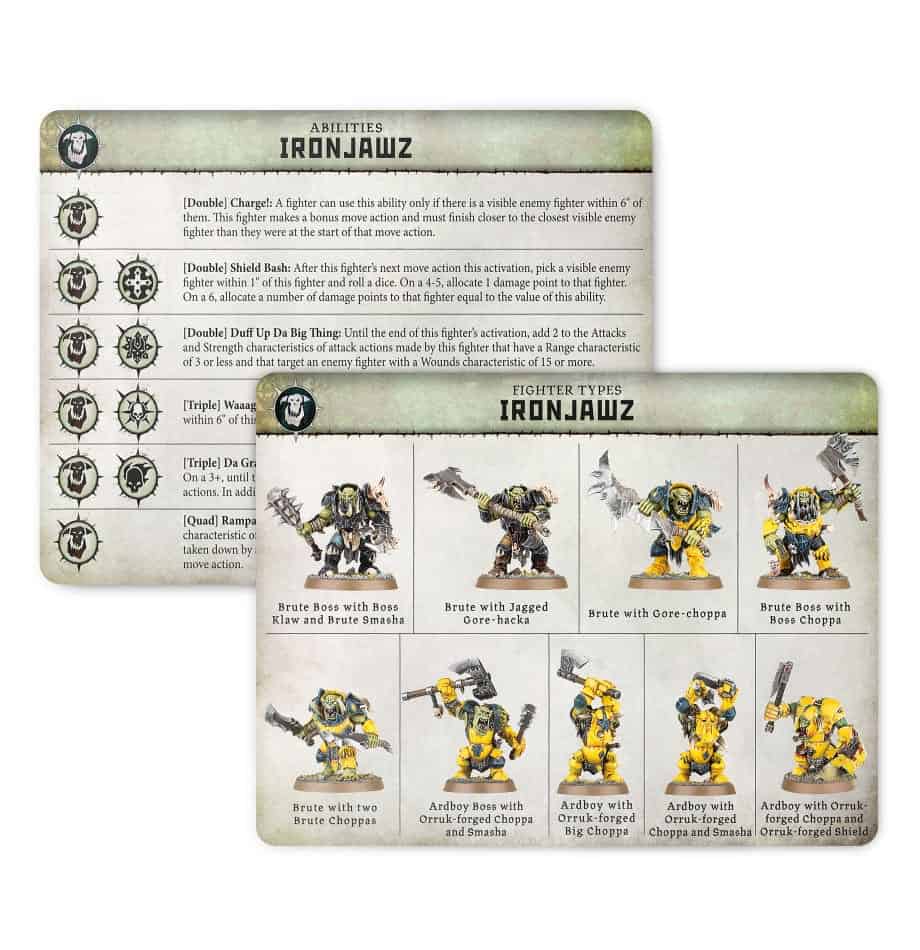 One of your 3 options for a Leader in the Ironjawz Warband. With 35 wounds, 5 Toughness and 6 strength, his only weakness is a lackluster 3 movement.

The movement isn’t too awful because with careful planning and a good use of abilities you can manage to get a good deal of movement in.

He is definitely a pricey model, costing slightly over ¼ of your total point value.

But let’s break the 3 attacks with a 3/6 damage spread down:

Now these values aren’t even factoring in if you can utilize (Double) Duff up Da Big Thing, which grants you an additional 2 strength and 2 attacks (only on dudes with +15 wounds).

The strength bonus is mostly irrelevant because 6 toughness is unheard of, let alone 7 but the additional two attacks bring his average damage per activation up to 13 pr. round.

He is 5 points cheaper than the Brute Boss with Boss Choppa and the stats remained entirely the same except for a strength drop to 5 and lower damage output but with an additional attack.

Now when we combine with his damage ability (Double) Duff up Da Big Thing, you’ll see him reach an average of 12 damage per combat activation.

Sadly, the weakest leader option. All he brings to the table is his low points value, but I’m not sure if that’s worth it.

His Strength and damage output is the exact same as the Brute Boss with Boss Klaw and Smasha, but his lower health and defence really leave him comparably fragile when you definitely need to keep him alive to make good use of (Triple) Waaagh!.

A very solid albeit expensive model. Toughness 5, Strength 4 and 25 wounds. With a 2/4 damage spread and 4 attacks, he can deal rather substantial damage.

This will become 11 damage on average per combat action with (Double) Duff up Da Big Thing.

This model is the same with the Brute with two Choppas except he has a strength of 5 and only 3 attacks.

This lowers his damage in general and he doesn’t gain as much assistance from (Triple) Da Grab an’ Bash.

So even under ideal circumstances, when fighting a model with a Toughness of 5, there isn’t any benefit to the Gore-Hacka.

When you fight someone with a toughness of 4 or less, it’s blatantly clear that the Two Choppas version is much better.

Frankly the Gore-Hacka should have a 2” range to be useful because as it stands, there’s no reason to use it.

The Diet version of a Boss with a Brute Boss Choppa.

The reduced point cost only results in 10 less wounds. He’s definitely worth taking.

A weaker version of a Brute with Gore-Hacka who’s a lot more point efficient.

In fact, the non-boss version has the exact same number of attacks and the same damage spread, with the difference being that he has Strength 4.

As far as the Ardboys go, He’s definitely the choice for high damage.

With Toughness 4 and Wounds 15, he’s certainly not the tankiest in this army but he could easily be mistaken for an elite model in many other warbands.

Ardboy with Choppa and Smasha: 110 points

The same Toughness, Strength and Wounds as the Ardboy with Big Choppa, but he gains an additional attack but loses out on damage going from a 2/4 to 1/4.

This may not seem like much but it’s definitely a big change.

Ardboy with Shield and Choppa: 125 points

Your Cheap tank, frankly he’s not very good. He has the same 1/4 damage spread as an Ardboy with Choppa and Smasha but only 3 attacks.

His only strength is that he has a Toughness 5.  Even his special Ability, while it can be useful, isn’t particularly powerful.

Why would an Orruk even need a shield anyhow though?

Not the most competitive option, unless you just someone to gran an objective and hold it.

Abilities for the Ironjawz Warband

Strategy and Tactics for the Ironjawz Warband

Pros and Cons of the Ironjawz Warband

-Difficulty Climbing even the smallest of obstacles

-Very unlikely to win objective based missions, as the slow movement makes it hard to get where you need to be.

How to buy an Ironjawz Warband

Getting a box of each will give you 5 brutes and 15 Ardboys and will cost you £62 (or you save a bit if you select a cheaper store). 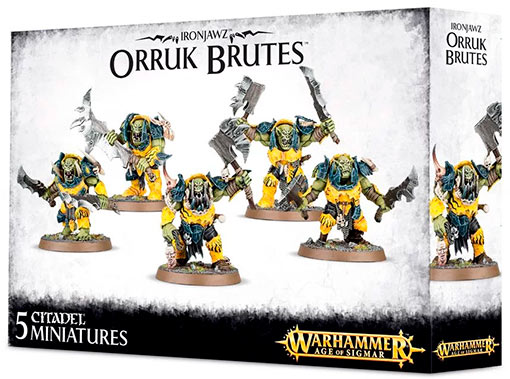 The box of Ardsboys gives you 15 models. There should be enough options to kit them out exactly as you want them. 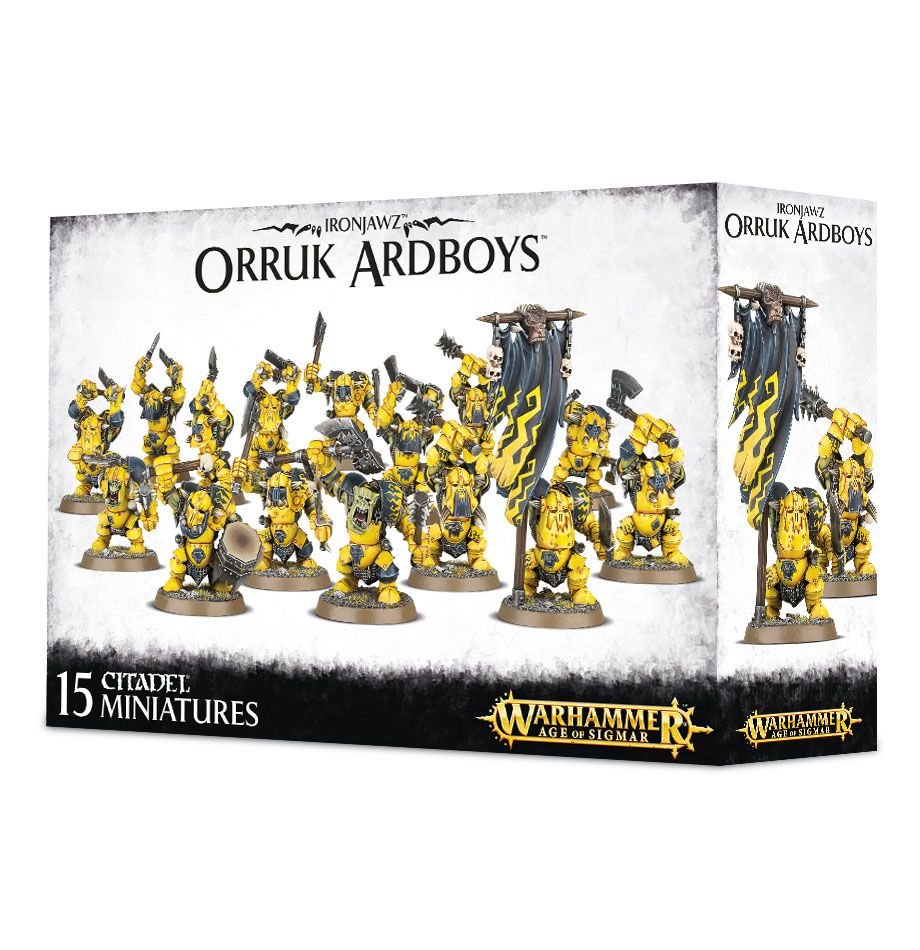 If you can find a way to get your hands on the Orruk Underworlds Warband, you can get 4 Ardboys pretty cheap (but they seem to be out of production).

If you are looking to get into playing an Ironjawz army and the warband is your first step, the Start Collecting box for Ironjawz will include 10 Ardboys (but sadly no brutes).

Are you Ironjawz the coolest Greenskinz on the block?

The most important thing to remember when painting Ironjawz is they’re Orcs. Simple right?

Why would I even mention that? Well you see Orcs don’t have a dress code or uniform.

There’s literally no reason you should feel obligated to not let each Orc be entirely unique.

In my personal Warband I have two groups: The Black n Rustyz, Ardboyz with black rusted armor, and the Lobstah Boyz named for their commander Lobstah Johnson the Orruk Lobstah, an Orruk Brute Boss with Boss Klaw, appropriately painted.

I decided that it would be interesting to remove the breastplates and fill the ‘nipple holes’ with green stuff. I may have done the same with the backplates but it just seemed like too much effort, so what we’re left with is actually an incredibly interesting group of Brutes who had to nail the backplates into their backs.

Each Orruk should ooze personality. If these models weren’t painted with normal AoS in mind, I wouldn’t have even themed them into groups.

Think about how each Orruk expresses itself.

Maybe one would be particularly bloody and wear blood as facepaint. Maybe some LOTR Skin colours: browns, and dark greys or even pale whites.

There are hundreds of incredibly interesting things to do with Ironjawz, the sky’s the limit don’t feel constricted to the usual options.