The Fyreslayers are the sons of Grimnir, the duardin god of battle who perished in an epic fight against Vulcatrix, mother of Salamanders.

They are fierce warriors originally from Aqshy, the Realm of Fire, characterized by their prominent hair style.

If leading a warband of half-naked dwarves is your playstyle then there is no better choice than Fyreslayers.

Background and Lore of the Fyreslayers Warband

The Fyreslayers are duardins dedicated to Grimnir. Their long-lost god died fighting against the godbeast Vulcatrix.

From the shattered remains of the two gods were born the Magmadroth, powerful reptilian beasts able to spit fire and be extremely resistant, and the ur-gold, a substance so similar to gold that only Fyreslayers priests can recognize the difference.

The ur-gold is used for many purposes, but especially in battle as, other than providing incredible powers to the wielder, releases parts of Grimnir’s spirit.

The duardin’s belief is indeed that when enough shards of Grimnir will be released, it will be possible to bring back life to their god.

Fyreslayers live in powerful subterranean fortresses called Magmaholds and they group together in lodges.

Each lodge is ruled by a Runefather who may provide control of one of his armies, depending on the size of the magmahold population, to one of his numerous Runesons.

The priests belong to the Zhargrimm order and are led by Auric Runemasters.

The infantry of the Fyreslayers is made by the Vulkite Berzerkers, that form the bulk of the army equipped with Fyresteel axes or war-picks, Hearthguard Berzerkers, that represent the elite melee specialists and tasked to protect the leaders of the lodge, and the Auric Hearthguard, the protectors of the forge-temple.

Fyreslayers can be found anywhere there is a chance to obtain more ur-gold or rectify a wrong, selling their services to the highest bidder.

And Eighpoints is no exception, providing plentiful of occasions for the most adventurous duardins.

But how do the Fyreslayers play on the tabletop?

Before flocking to war in search of ur-gold, let’s see them in detail.

Overview and Points for the fighters in the Fyreslayers Warband 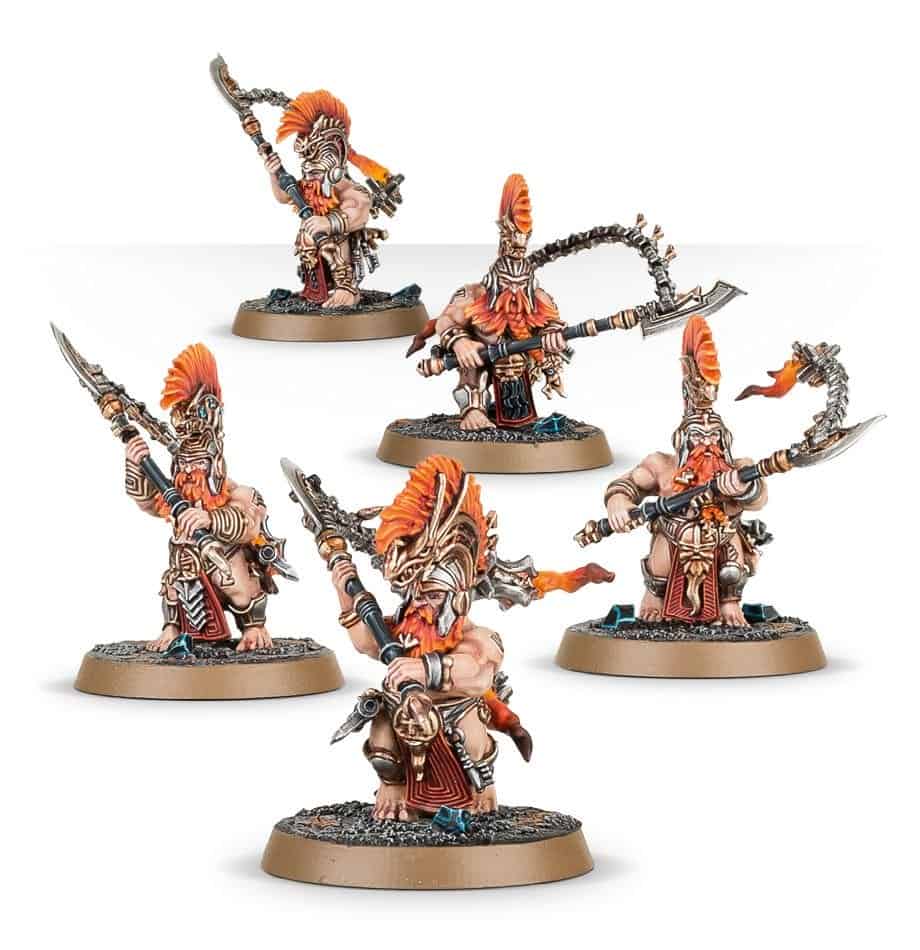 The Hearthguard Berzerkers represent the elite fighting force of the Fyreslayers.

As all Fyreslayers they have 12 wounds (22 for the Karls), Toughness 4 and an “impressive” 3” Movement.

All Fyreslayers have access to 3 useful abilities: for a Double they can throw an axe at 6” distance and do 1 damage for each 4-5 or up to 6 damage for every 6.

When they need to run, they have access to the universal ability Rush for an extra inch each activation or 3” on the next Move action with Relentless Zeal, both costing a Double.

Finally, for a Quad they can add the value of the ability to their Attacks for the entire activation.

With that, a Berzerker can have up to 18 attacks and even with Strength 3 they are bound to do some serious damage.

The number of attacks can potentially be increased further with a Triple, as long as the model is within a leader that killed a model in the same activation.

In that case all friendly fighters within 6” can get an extra attack per activation. Honour Our Oaths, this ability, is available to all leaders.

Berzerkers also have their own ability, Duty Unto Death, that can be used only if they are injured (at least 5 wounds allocated), and allows them to move and attack for free once.

In combination with Honour Our Oaths can provide a lot of potential damage but even in itself it’s extremely strong as it allows up to 3 attack sequences in one single activation including and an always welcome bonus move, especially considering the slowness of the warband.

As mentioned, the Karls have similar profiles with the Broadaxe providing more attacks and the Poleaxe more minimum damage.

The Auric Hearthguard have the only ranged option available to this warband: the magmapike with range 3-15”.

With that weapon they can “Encase in Molten Rock” their opponents: they just need to attack a fighter, does not need to actually damage them and then, until the end of the battle round, their movement is reduced depending on the ability’s value up to a minimum of 1.

The best way to use them is, of course, to keep them at distance and let them melt their opponents helping at the same time to compensate the slow movement of the warband.

As everyone else in the warband they too have Movement 3”, 12 wounds (22 for the Karl) and Toughness 4.

They also have access to the abilities Fyresteel Throwing Axe, Relentless Zeal and Unleash Runic Fury (although the bonus attack cannot be done with the ranged option).

The Karl also has access to Honour Our Oaths although the increased attack is not valid for the ranged weapon and considering you want the Auric as far as possible from the enemy line the 6” bubble from this Karl may not include any of your fighters. 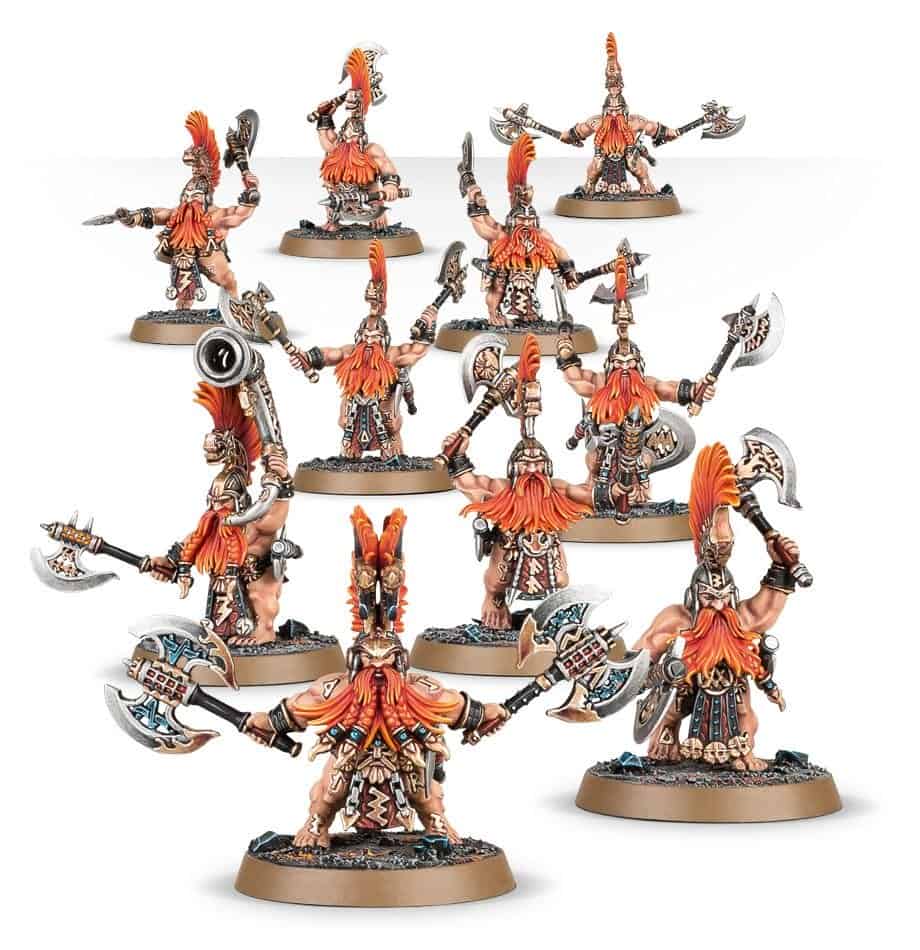 The Vulkite are the cheapest models of this warband and this allows them to be used in scores.

For their low cost, they still have Toughness 4 (the 2 versions with Slingshield up to 5) and 12 wounds (22 the Karl) making them an efficient cheap unit.

The War-pick differs from the Handaxe by adding 1 to the damage on critical hit.

For the rest the profile is similar:

The Karl instead has 4 attacks at Strength 4 for 2-4 damage representing a valid option as leader.

Vulkite don’t have a special ability but they can take advantage of Fyresteel Throwing Axe, Relentless Zeal and Unleash Runic Fury.

The Karl can also use Honour Our Oaths if he can eliminate an opponent and there is a Triple available.

For their cost, and for the numbers you can field, they are definitely valid options.

Did you know we make guides for all Warcry Warbands?

You can find all the warcry warbands guides here.

Abilities for the Fyreslayers Warcry Warband

Strategy and Tactics for the Fyreslayers Warband 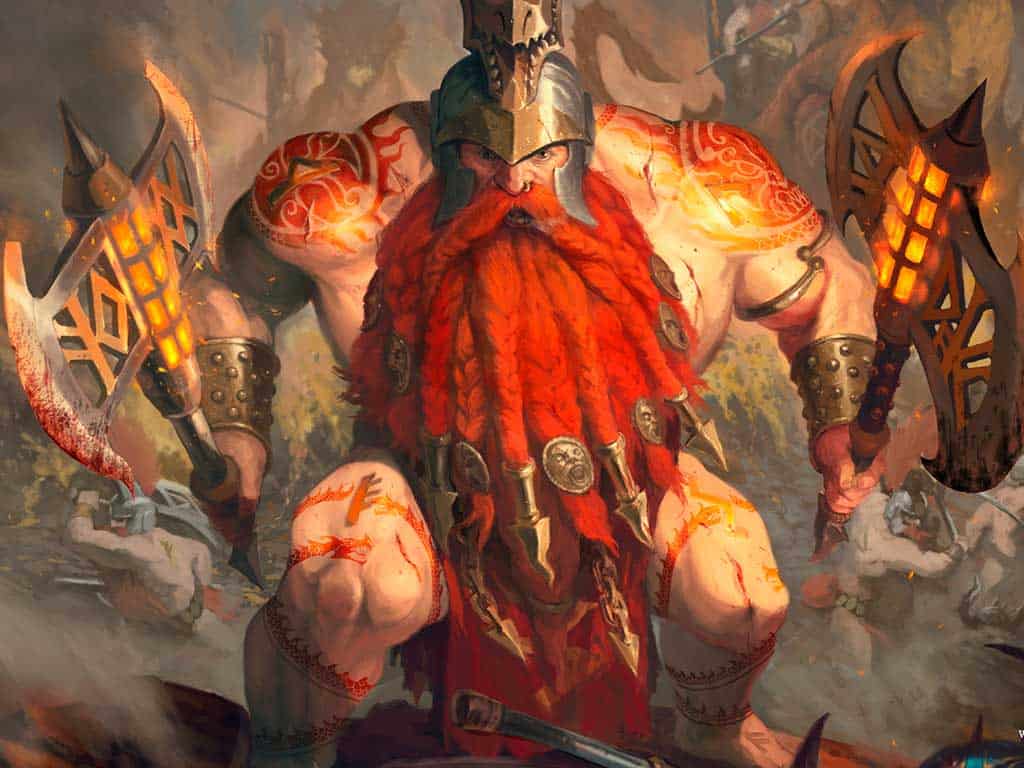 The Fyreslayers are a wild warband, that sacrifices defence for raw power in attack.

All their abilities provide an offensive edge and if used correctly can actually make the difference.

With 3” movement, the ability to move an extra 3” for a Double (Relentless Zeal) can allow an engagement last minute or taking a coveted objective otherwise unreachable.

Otherwise, for a Double they can try their luck throwing axes up to 6” away (Fyresteel Throwing Axe) although the results are unpredictable: the damage range can go from 0 to 12 with a more statistic 1…

Unleash Runic Fury costs a Quad but provides extra attacks for melee weapons bringing a Karl to up to 20 Attacks per activation or a Hearthguard Berzerker to 18 (you will need to have rolled four 6s in the initiative phase although).

Even without this, the ability is powerful and provides extra attacks to your horde of duardins provided they are within 6” of the leader and he is able to eliminate an opponent in the same round.

Berzerkers have access to an extra bonus move and an extra attack that can be extremely deadly at the right moment but to use it they need to be injured so it’s an “all-in” action that can miserably fail.

In general, there’s no purpose of keeping the duardins in defensive positions because they will eventually be taken out, so using this ability is often a valid choice.

Auric Hearthguard can instead reduce an enemy movement by simply attacking them, even at 15” distance for just a Double. This ability can be extremely useful to prevent an enemy from taking an objective or from running away if you need to finish him off with your slower units.

Finally, the Vulkite are the cheapest unit allowing you to field quite a few of them.

We recommend as a Karl to choose one of the Hearthguard Berzerker and complete the army with a couple of Auric Hearthguard and a combination of other Hearthguard with whichever weapon profile is preferred.

The strategy of the warband is clear, use the Hearthguard ranged options to slow your enemies or weaken them until your melee fighters are in range and use the other abilities at the right time to eliminate the strongest opponents.

Controlling the board will be highly unlikely so concentrate on strategic objectives and be careful with high movement opponents.

Pros and Cons of the Fyreslayers Warband

How to buy a Fyreslayers Warcry Warband

all prices used are standard Games Workshop prices. It is possible to get the different things cheaper (check the links for prices).

The Fyreslayers warband can be purchased from 2 boxes. But to get every single assembly option you may need to buy more than one of the same box.

Unless you already have an Age of Sigmar Fyreslayers warband, in that case you most likely already have everything you need.

The fighter cards and ability cards were released with the White Dwarf  issue 451. It can be hard to get a hold of now, but it is possible to maybe find an image of the rule somewhere… 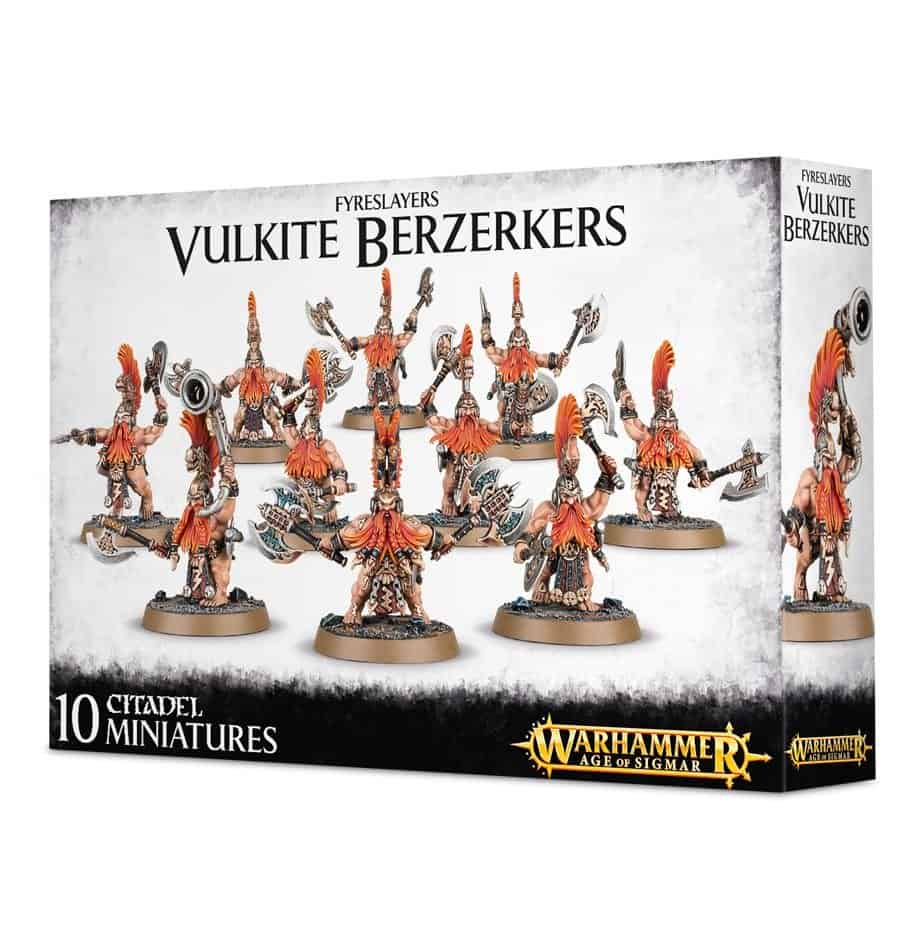 The first box is Vulkite Berzerkers, 35£ for 10 models.

It contains all you need to assemble a Karl and a mixture of the other models, however if you plan to use the same miniatures in Age of Sigmar, all 10 need to be equipped with the same weapon profile. 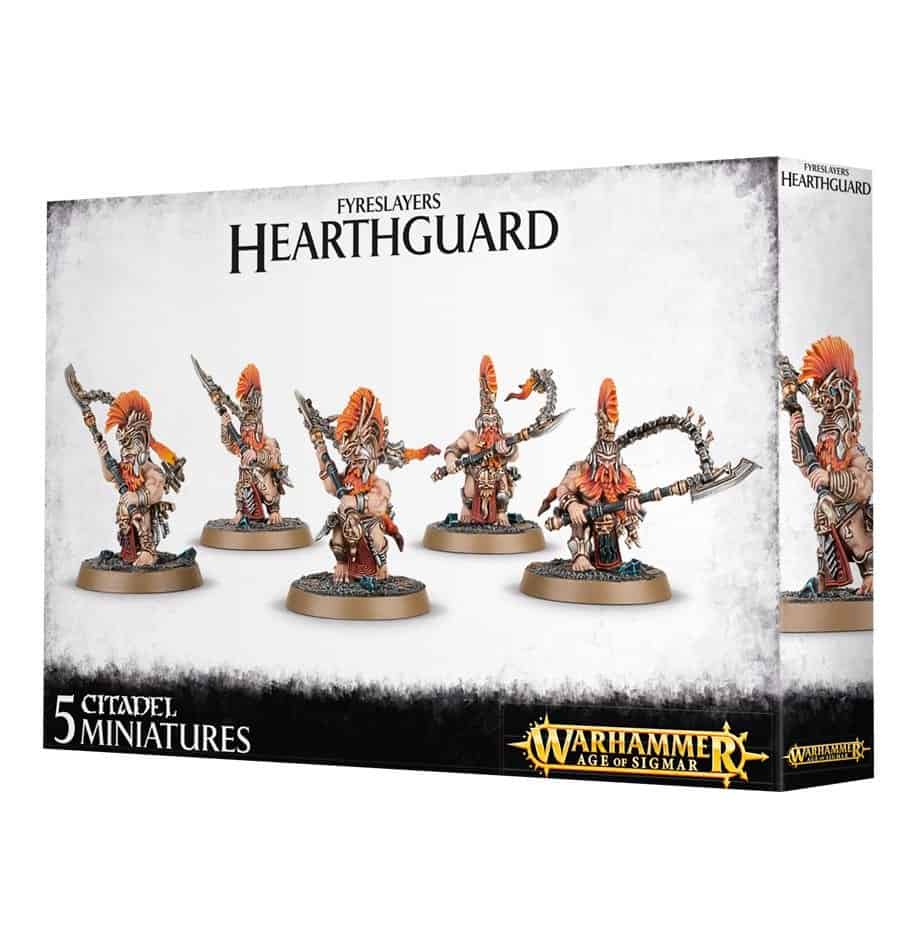 The second box allows you to assemble both Hearthguard Berzerkers and Auric Hearthguard. 5 models for 27.5£ means you will need at least 2 sets if you want every single miniature.

Only one can be assembled as a Karl, meaning you need to choose between the 3 different options.

If you want to use them in Age of Sigmar, you will need at least 3 sets, one for type/weapon profile. Otherwise once chosen your karl, you still have 4 more models to customize.

The Start Collecting does not offer much value, so ignore it for Warcry purposes.

The Warhammer Underworld warband “The Chosen Axes” can provide an alternative Vulkite Karl and 2 Vulkites with pair of Axes for 15£. 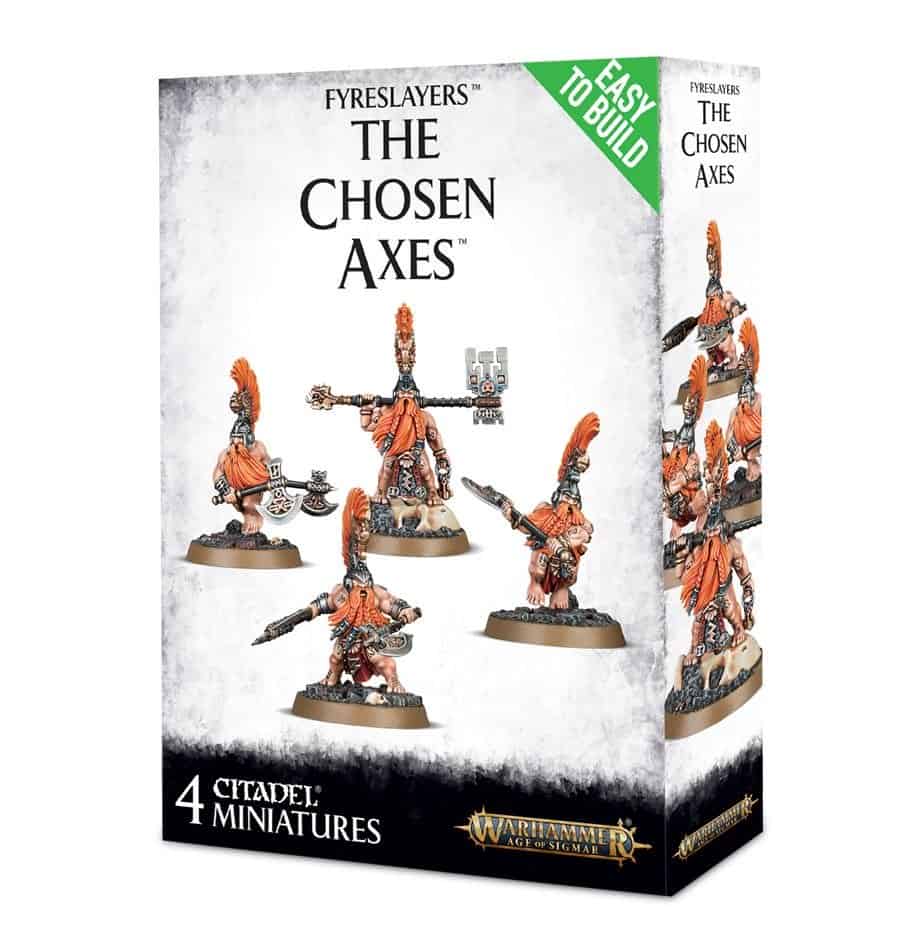 Tips on painting a Fyreslayers Warband for Warcry

Do you have some awesome Fyreslayers painted up?

The Fyreslayers lodges each have their own colour-scheme but for some more traditional colours there is plenty of tutorials from when the Fyreslayers were originally released from Warhammer Community or other painters.

The Chosen Axes warband allowed a chance to refresh GW’s own guide.

And for details you can look at obsidian blades or beards tutorials. 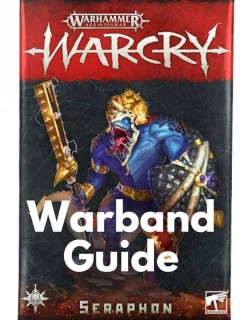 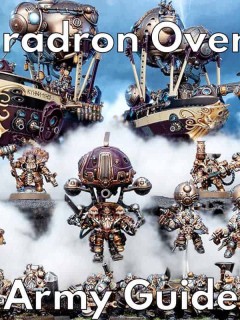